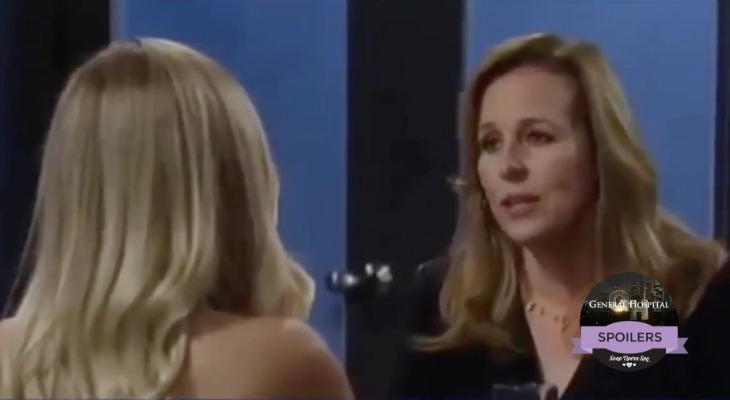 ‘General Hospital’ (GH) spoilers for Wednesday, April 20 reveal a showdown between Carlos and Anna in jail, Michael wants answers about Sabrina, Laura tells Lulu about her Helena mystery, and Sam is terrified for Jason. Here’s what to expect on tomorrow’s GH episode.

Down in the co-ed holding cells, Anna Devane [Finola Hughes] is not happy that her new neighbor is Carlos Rivera [Jeffrey V Parise]. Carlos will take the opportunity to taunt Anna that he’s going to walk away from this.

Anna goes off on Carlos and is tearful in her rage. She really hates Carlos and lets him have it. It’s bad enough that Paul Hornsby [Richard Burgi] walked out a free man. Anna will snap if Carlos gets away with this.

Laura Spencer [Genie Francis] meets with Lulu Spencer [Emme Rylan] and they talk about Lulu’s marriage and Laura’s mystery. Looks like Laura, with the help of Kevin Collins [Jon Lindström], has figured out the message Helena Cassadine [Constance Towers] left her.

You Might Also Like —> ‘General Hospital’ Casting News: Showrunners Looking for Key Roles to Shake Up Port Charles

Laura and Lulu talk about her piecing her marriage back together and it looks like there’s some bedroom banter. Will Laura admit she’s crushing on Kevin while he helps her with her Cassadine mystery? How much will Lulu reveal about her efforts to mend her marriage?

Dante Falconeri [Dominic Zamprogna] talks to Michael Quartermaine [Chad Duell] and warns him off about going to chase down Sabrina Santiago [Teresa Castillo]. But no way will Michael back down even when Dante tells him not to be stupid.

Over at GH, Felix DuBois [Marc Samuel] is surprised to learn that Griffin Munro [Matt Cohen] is Duke Lavery’s [Ian Buchanan] son. Michael will reach out to Felix later about helping him hunt down Sabrina. Looks like Michael is packing to head to Puerto Rico!

After the threats from Sonny Corinthos [Maurice Benard], Julian Jerome [William deVry] wants some information from Alexis Davis [Nancy Lee Grahn] about her meeting with Carlos, but how much can Alexis tell him without crossing ethical lines?

All this and more on the Wednesday, April 20 episode of GH. Watch then tune in to Soap Opera Spy for detailed daily ‘General Hospital’ spoilers, news, interviews and more.

‘Days of Our Lives’ Spoilers: Victor and Nicole Plan to Take Down Deimos – Steve Moves Out – Jade and Joey Bond Over Family Complaints