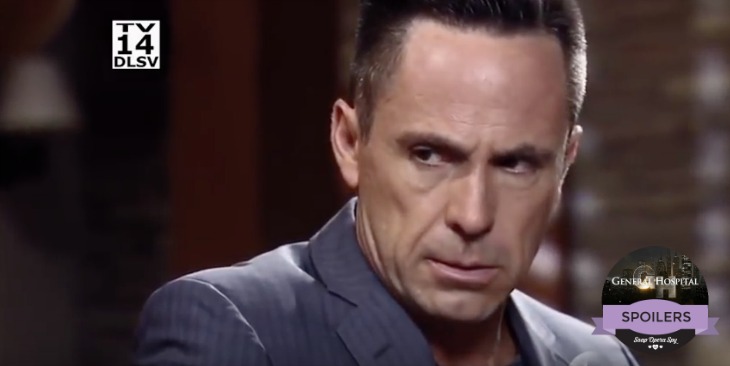 ‘General Hospital’ (GH) spoilers for Thursday, July 7 reveal that Curtis gets a new job, Alexis thinks she’s beaten Julian, Kristina says the wrong thing at the wrong time, and Maxie and Nathan have a worried talk about Claudette.

Alexis Davis [Nancy Lee Grahn] is worried that Julian Jerome [William deVry] will find out what she’s hiding. A GH spoiler video shows her with the wire in her hand and Julian in the room. Will Alexis be in danger?

Julian tells her that at least both know where they stand now. Anna Devane [Finola Hughes] pushes Paul Hornsby [Richard Burgi] to arrest Julian ASAP before he figures out what’s up with Alexis. Is Alexis in danger because of Julian?

Nina Clay [Michelle Stafford] meets with Curtis Ashford [Donnell Turner] and they also talk about Julian. Curtis says you don’t want to get on the wrong side of the law, especially when it comes to a man like Julian.

You Might Also Like —> Matt Riedy Dishes On His Stint As Dr. Mayes On ‘GH,’ Plus Whether He Will Return To Soaps

Will Nina worry about the alibi she agreed to that covered for Julian? GH spoilers tease that Nina will offer Curtis a job. Will he be her bodyguard? Or is this something related to Crimson? Will this interfere in Curtis’ desire to become a cop again?

Nathan West [Ryan Paevey] is stunned to find Maxie Jones [Molly Burnett] in Claudette’s [Bree Williamson] room. He asks why she’s there, but it’s Maxie that should be asking question – like why is her fiancé knocking on the door of this woman.

After Maxie learns the truth about how “CJ” knows Nathan, she’ll be stunned. Is that what sends Maxie running to Griffin Munro [Matt Cohen] to talk about her relationship? Will she tell him that Nathan’s ex is in town?

Also, Maxie and Nathan talk and wonder why Claudette really came to Port Charles and wonder what trouble she’ll make while she’s there. What is Claudette up to? Does she want Nathan back or just wants to break up Nathan and Maxie?

Kristina Corinthos [Lexi Ainsworth] is with Aaron Roland [John DeLuca] and watching fireworks and says she doesn’t want the night to end. They will kiss passionately but then Kristina says the wrong name – could she say Parker’s name?

Be sure to watch GH on Thursday, July 7 and tune in to Soap Opera Spy for more General Hospital spoilers and news.

‘The Young And The Restless’ Spoilers: Ian Ward Pushes Two Women Back To Their Husbands