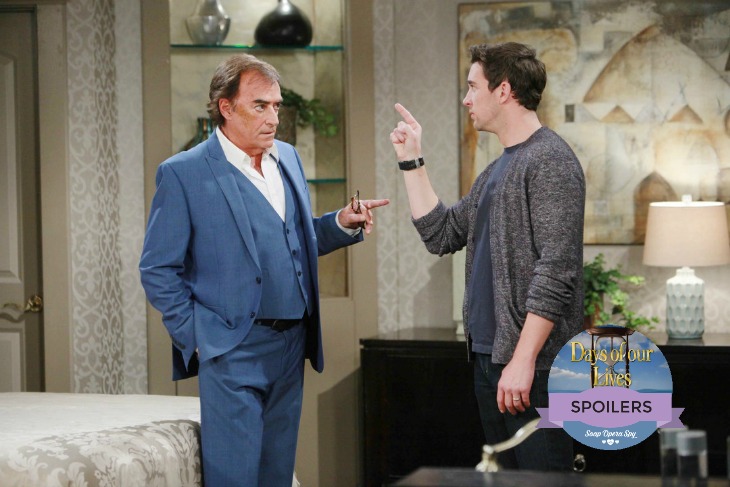 “Days of Our Lives” spoilers for Thursday, July 7, tease that Stefano (Joseph Mascolo) will make another appearance. DOOL viewers know that Chad (Billy Flynn) sometimes has visions of his father. Stefano typically offers guidance to Chad, but it looks like they won’t be on the same page when it comes to his latest advice.

Abigail (Kate Mansi) is missing and Chad is completely distraught. The goodbye note truly sent Chad over the edge. Regardless of whether the letter is real or not, Chad has no intention of giving up on Abby. He wants to find his wife and bring her home where she belongs.

“Days of Our Lives” spoilers indicate that Stefano won’t agree with Chad’s plan. He’ll think it’s time for Chad to focus on Thomas and move on. Stefano and Andre (Thaao Penghlis) realize that Abigail is Chad’s weak spot. Abby was a huge part of what kept Chad on the straight and narrow.

Of course, that’s not the usual DiMera behavior. Chad has tried to avoid turning into his cutthroat father and brother. When Stefano tells Chad to let go of Abigail, Chad will likely react with rage. As long as Abigail is out there somewhere, Chad will never stop trying to find her.

That’s where Andre comes in. He can tell that Chad doesn’t entirely buy his story about Abigail and the letter she supposedly dropped off. “Days” spoilers reveal that that Andre will see a news report about a plane crash. He’ll have a lightbulb moment and it could affect Chad in a big way.

“Days of Our Lives” spoilers state that Andre will fake Abigail’s death. If Andre can make Chad believe his love is gone forever, he might be able to pull his bro to the dark side. Plus, Andre just enjoys manipulating anyone and everyone. It’s what he does best!

Meanwhile, Deimos (Vincent Irizarry) and Kate (Lauren Koslow) will hash things out at the Kiriakis mansion. “Days” spoilers say Deimos will make it clear that he’s not happy with Kate’s actions. She’ll defend her behavior and they’ll try to figure out a solution to the situation they’ve created.

Will Kate and Deimos manage to move past this unfortunate incident? Kate will certainly fear Deimos’ wrath, but perhaps Nicole (Arianne Zucker) is really starting to change him. Deimos could make some updates to the way he lives his life.

Nevertheless, Deimos may not stay on this new-and-improved path indefinitely. He’s a villain at heart and the rumors hint that could mean more trouble in Salem. Keep watching DOOL and don’t forget to check Soap Opera Spy often for the latest “Days of Our Lives” spoilers, rumors, updates and news.

‘General Hospital’ Interview: Matt Riedy Dishes On His Stint As Dr. Mayes On ‘GH,’ Plus Whether He Will Return To Soaps