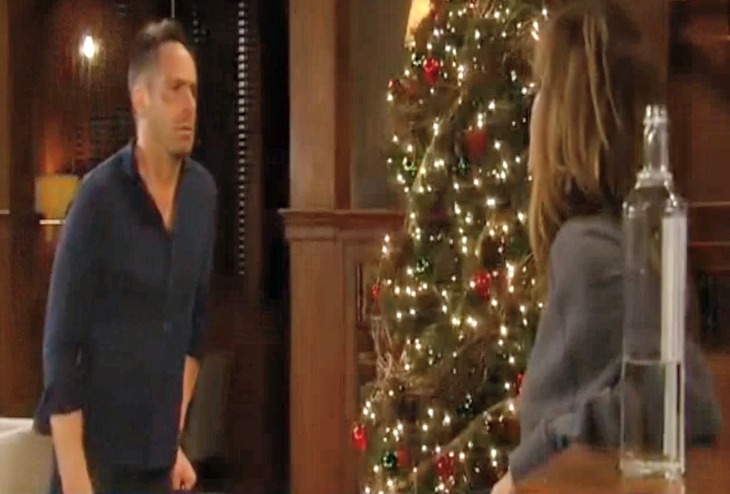 General Hospital (GH) spoilers for Monday, December 26, 2016 show Carly Corinthos (Laura Wright) confronting her husband, Sonny (Maurice Benard) about what is going on with him and her assistant, Nellee Lanier). Carly knows that Sonny and Nelle have been lying to her, and she demands to know what is going on.

Michael Corinthos (Chad Duell) notices that Nelle was sad when they were all together at his parents’ place. He wants to know what she could be sad about on Christmas Eve. Will Nelle tell Michael the truth, and what will he do when he finds out? Michael has been spending a lot of time with Nelle, and this deception could destroy him as well as separate his parents for good.

GH’s PCPD Police Commissioner, Jordan Ashford (Vinessa Antoine) has been busy trying to find out who plotted to kill Julian Jerome (William DeVry) and in the process has alienated her relationship with Dr. Andre Maddox (Anthony Montgomery) but forced her to face her past with Curtis Ashford (Donnell Turner). Sources reveal Jordan will bump into Andre on the docks, will they rekindle their relationship, or are they done for good?

Alexis Davis (Nancy Lee Grahn) has been very conflicted with her feelings about her ex-husband, Julian after he had attempted to kill her and she accidentally ran him over with her car. They are stuck in a bitter love-hate relationship, which seems to soften as Julian forced his way into living with her again. They share a tender kiss after they decorate the Christmas tree. Spoilers show Alexis tells Julian he needs to hear a certain truth; is there a chance Julexis will reunite?

After news begins to spread, Elizabeth Webber (Rebecca Herbst) visits Franco Baldwin (Roger Howarth) in the interrogation room at the PCPD. She wants to know if it is true, that he killed Tom Baker (Don Harvey). Do you think Franco killed Tom, or did someone else seek justice?

Be sure to tune into ABC’s General Hospital (GH) on Monday, December 26, 2016 to catch up on all these stories and more. Check Soap Opera Spy often for updates, news, rumors and spoilers!