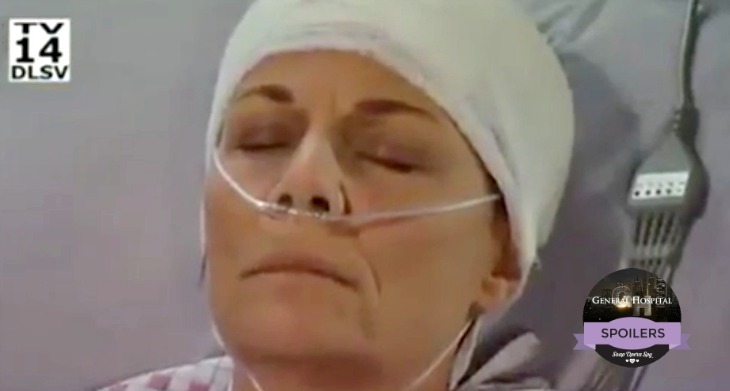 ‘General Hospital’ (GH) spoilers for Friday, April 8 reveal Tracy’s not out of her medical crisis yet, Nina shocks Franco, Carly pleads with Jason for help, Sonny is a man on a mission – and Anna is ready to risk it all for justice. Here’s what to expect on tomorrow’s GH episode.

First, Franco [Roger Howarth] will be surprised when Nina Clay [Michelle Stafford] sets a very sexy seduction scene for him. Did Nina get good news on her fertility tests? Is Nina trying to get pregnant? We know she wants a baby more than anything.

As Tracy lingers unconscious after her surgery, we’ll see Dr Hamilton Finn [Michael Easton] pacing her room impatiently and yelling at her to wake up. Tracy will wake, but the surgery seems to have a strange effect on her. Did brain surgery make Tracy pleasant?

Sonny Corinthos [Maurice Benard] is rushing out of town to try and nab Carlos Rivera [Jeffrey V Parise] but Michael Quartermaine [Chad Duell] shows up and demands that Sonny take him along for the ride. No way will Sonny let his kid get involved in this, right?

Meanwhile Carly Corinthos [Laura Wright] runs to Jason Morgan [Billy Miller] for help – she’s afraid Carlos will kill Sonny. Carly wants Jason to go protect Sonny. We can expect Jason to say no and for Sam Morgan [Kelly Monaco] to push back on Carly for even having the nerve to ask.

Also, Andre Maddox [Anthony Montgomery] shows up to Anna Devan’s [Finola Hughes] house and says they need to speak urgently. However Anna doesn’t want to let him in since she has the Port Charles DA tied up in her living room. What’s up with Andre? Is this about Carlos?

GH spoilers tease that Paul Hornsby [Richard Burgi] will wake up before Anna leaves but she may leave him tied up so he can’t stop her from going. Looks like Paul may be both impressed by and frightened of Anna’s actions.

What do you think GH fans? Excited to see Sonny and Anna head off together to take down Carlos? With them working together, it looks like the shady hit man doesn’t stand a chance. Watch GH then tune in to Soap Opera Spy for more ‘General Hospital’ spoilers and news.