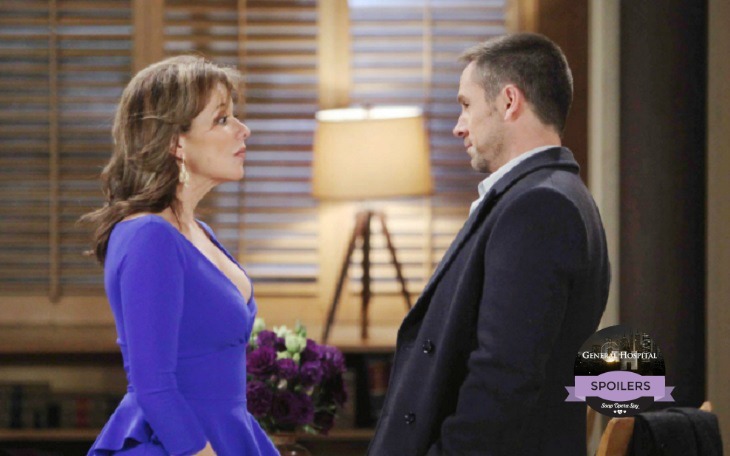 When Alexis Davis (Nancy Lee Grahn) married mobster, Julian Jerome (William deVry), the fans figured it would be a decision that she’d live to regret. ABC Soaps In Depth reports that not only did he lie to her about putting the mob life behind him, but he also roped her in on a scheme to murder Carlos Rivera (Jeffrey Vincent Parise).

It will be interesting to see where the storyline goes from here, because the writers, Shelley Altman and Jean Passanante have made it clear their vision for “GH” includes the violence on the show having legal or personal consequences.

It seems highly likely that Alexis will have to end her marriage to Julian because his lifestyle compromises everything that is important to her. Alexis appears to have it all together in every aspect of her life except her fascination or the way she’s drawn to one bad boy after another.

If Julian doesn’t face legal ramifications for murdering Carlos, it seems certain that his marriage will fall apart. The writers have made it crystal clear that they plan to make sure all the violence on the show has some sort of consequence.

Alexis will be forced to do some soul -searching in much the same way Carly Corthinos (Laura Wright) had to do. She will have to evaluate what is important to her, and if her love for Julian is worth the violence and pain.

“Alexis loved Julian with all her heart which makes the decision she is facing, much more challenging. Her action will have consequences not only for herself but professionally, as well,” Jean Passanante reported.

No one knows what the future holds for Julian and Alexis, but their future does not look very bright. If they can somehow get past all the violence and lies, how can they ever trust each other? It seems like everything points to this possibly being the ending of Julexis on “General Hospital.”

‘The Young And The Restless’ News: Michael Roark’s Primetime Gig, Starring On The CW’s ‘Beauty And The Beast’

‘General Hospital’ Spoilers: Are Franco and Liz Destined for Love – Or Will His Past Get in the Way?