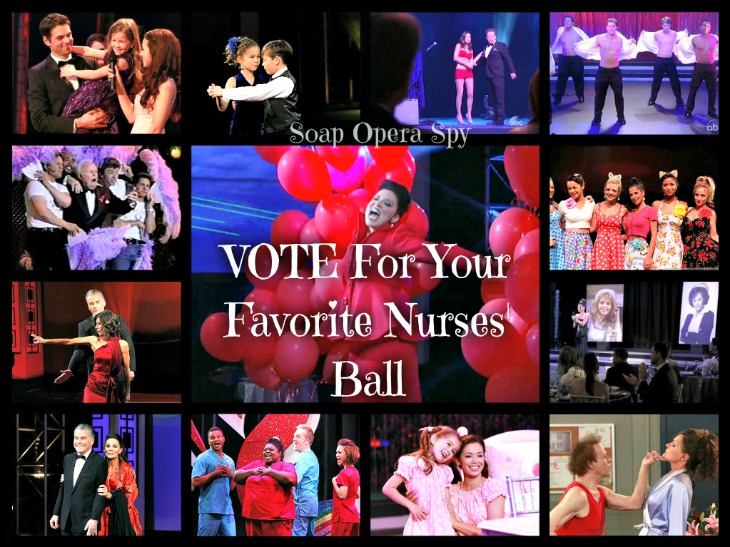 “General Hospital” (GH) has taken on many strong storylines throughout the years including rape, mental illness, and teen pregnancy but many would agree no issue was as scary or controversial as the HIV-AIDS storyline of the ‘90s. In the 12 years of the Nurses Ball, fans have come to expect tears of laughter and sadness, fights, exposed secrets and jaw-dropping confessions. Though it may seem impossible to narrow it down, what year was the best? Let’s take a look back at Port Charles most memorable Nurses Balls:

In 1994, the ball began with many memorable events that included most of Port Charles. Robin (Kimberly McCullough) and Stone (Michael Sutton) reenacted the death scene from Romeo and Juliet and Jason (Steve Burton) and AJ (Sean Kanan) put on an adorable comedy act. Also, an onstage fight between Damian Smith (Leigh McCoskey) and Tony Jones (Brad Maule) pulled the curtain down on Lucy (Lynn Herring), leaving her in her underwear in front of the whole audience, a tradition that would last through most of the Nurses Balls.

By 1995, the ball really began to heat up. The performances got hotter as Ned (Wally Kurth) took the stage as Eddie Main; his sexy, singer alter ego. Also, Luke (Anthony Geary) and Lucky (Jonathan Jackson) performed a father/son hip-hop act and Luke, Lucky, and Justin (Joseph C. Phillips) accompany Mary Mae Ward (Rosalind Cash) to Gladys Knight and the Pips’ MIDNIGHT TRAIN TO GEORGIA. Most notably during this year, when proceeds were not to Lucy’s liking, a reminder from Luke of the 1994 underwear debacle inspires Lucy to take the stage and strip for donations. The money poured in as she danced the stage, even receiving $2500.00 for just one glove!

This Nurses Ball took place after the death of Stone, the GH character that had AIDS and initially inspired the Nurses Ball event. The sadness of the death set the tone for the ball. During this year, Lucy mentioned the real devastation the epidemic was having across the country more than ever. Mac (John J. York) gave a speech about AIDS and presented a tearful Robin a beautiful memory quilt in honor of her beloved Stone. It was also during this ball that Sonny (Maurice Benard) donated 30 million dollars for the Stone Cates Memorial hospital wing of General Hospital, a wing that is still referenced at GH today. The most memorable event, however, during this year and arguably any Nurses Ball’s to date, is when Robin announces she too was infected. After her announcement, she breaks down and can no longer speak, and Jason picks her up and carries her off stage.

The return of the Nurse’s Ball in 2013 was highly anticipated and did NOT disappoint. It was a mix of great entertainment, sassy fights, and tearful tributes. Sabrina (Teresa Castillo) and Emma (Brooklyn Rae Silzer) performed a great version of Call Me Maybe, and Rick Springfield/ Noah Drake performed Jessie’s Girl. The return of Brenda (Vanessa Marcil Giovinazzo) led to a catfight between her and Carly (Laura Wright) adding a little spice to all the fun. The ending remarks, however, stole the show. Patrick (Jason Thompson), Emma and Sabrina took the stage as a family. Sabrina spoke of Robins memory and then the family sang a beautiful version of You’re not alone with a picture of Robin in the background.

Vote below and let us know what Nurses Ball was your Favorite? Do you prefer a Nurses Ball full of memories and tears or do you rather them drama filled and full of strip teases? Share your comments below and come back to CDL often for more “General Hospital” spoilers and news.

‘The Young And The Restless’ Spoilers Week Of May 23-27: Billy Can’t Live Without Phyllis, Hilary Blackmails Lily, Sharon Fears Nick Will Uncover The Truth