‘General Hospital’ POLL: Will Alexis Rat Out Julian to the Cops? VOTE! 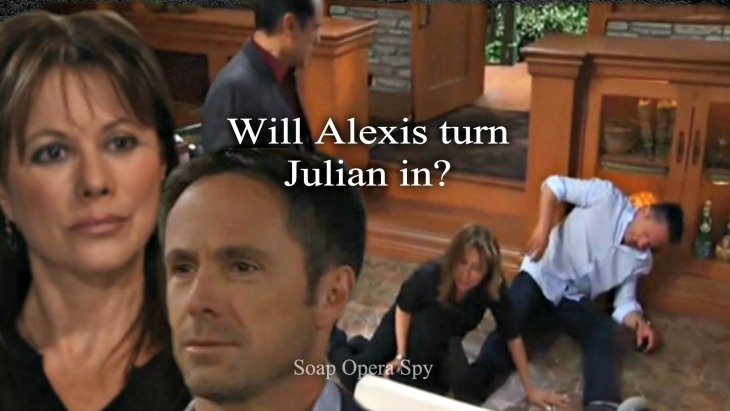 ‘General Hospital’ (GH) spoilers tease that Julian Jerome [William deVry] will be arrested at the Nurse’s Ball. If Jordan Ashford [Vinessa Antoine] slaps cuffs on the Jerome mob boss, will it be Alexis Davis [Nancy Lee Grahn] that gave them the evidence they need? Check this out then vote in the POLL!

Julian was confident that with Carlos Rivera [Jeffrey V Parise] dead and the witness “overdosing” that he was in the clear but then he had to face off with Alexis – and that was almost as bad as facing a day in court. Remember how she freaked out when Julian burned the bloody hankie?

She was horrified that not only did he show her evidence that he killed Carlos but then burned it. As his wife that thought he was out of the mob, the murder was a big deal. As a lawyer, destruction of evidence is unforgivable.

Given her anger at him burning the hankie, why would Julian trust her to burn his bloody shirt? Why did he even bring it home with him? We all saw Alexis take the bloody shirt and hide it away in a cabinet. It’s likely that Alexis hid it away while she considered her options.

Will Alexis use the shirt? She’s got that and the murder weapon in her possession. Will Alexis soon turn on Julian and rat him out to Jordan Ashford [Vinessa Antoine]? GH spoilers tease that early next week Alexis makes a “surprising decision.”

Later in the week an arrest is made and GH spoilers have teased for weeks that Julian would be arrested at the Nurse’s Ball, but will that come to pass? Other spoilers tease that Julian will be devastated by the end result of all his actions because he may lose someone close to him.

Will Julian lose everything? Clearly his marriage to Alexis is on the rocks but will he also lose his freedom if Alexis decides she can’t be on the wrong side of the law and feels she must turn the evidence in the Carlos murder over to the cops?

Julian seems to think this is all done, but for Alexis, her angst is just getting started. Sonny Corinthos [Maurice Benard] planted seeds of doubt when he told Alexis that Julian was using her affection to help cover his crimes then salted the wound by pledging to cut her out of his life.

On top of that, both Sam Morgan [Kelly Monaco] and Molly Lansing [Haley Pullos] have recently confronted Alexis about covering for Julian. Is all this too much for Alexis? Will she crack under the strain and turn the tables on the man she loves?

Vote in the POLL and share your comments below – and be sure to check back with Soap Opera Spy often for more ‘General Hospital’ spoilers and news.