‘General Hospital’ POLL: Which Of Alexis’ Daughters Is Your Favorite? VOTE! 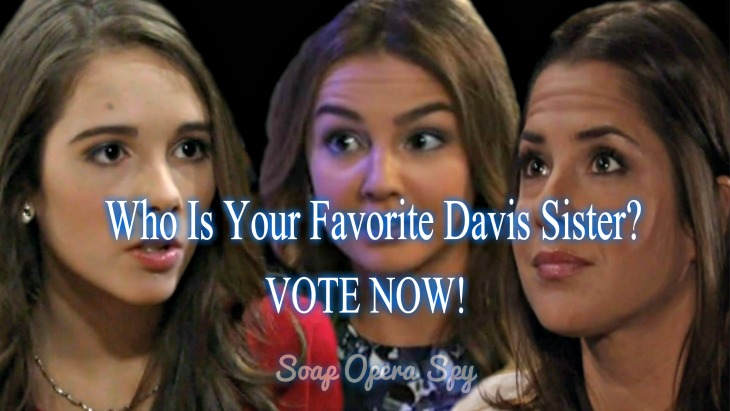 “General Hospital” (GH) fans are in the midst of watching Alexis Davis (Nancy Lee Grahn) juggle yet another man mess with one of her baby daddy’s. Despite her straight-laced attitude and law degree, Alexis cannot seem to keep her hands clean when it comes to the men in her life. On the bright side, each mess did result in a daughter, and her girls seem to be doing alright. The Davis girls stand out as one of Port Charles’s most tight-knit trios; surprising, considering their different dads and diverse upbringings; this begs the question, which Davis girl is your favorite?

Firstborn to Alexis and Julian Jerome (William DeVry). It wasn’t long ago that Sam arrived in Port Charles, a con-artist and looking for trouble. Since then, however, Sam has grown up! She is available for sisterly talks with both of her little sisters and still has time to be a wife and mother. Sam also seems to be Port Charles’s go-to private investigator and problem solver making her trusted by most, at least at the moment. She is equal parts reliable and edgy.

Middle daughter Kristina is still figuring things out. Of all the girls, Kristina should have it all together. At least she feels like she should, after all, Sonny Corinthos (Maurice Benard) is her father. This mob princess status, however, has not made life easier for Kristina, it has actually made it worse. It seems like every attempt to do right guarantees another disaster is looming for the privileged girl. Despite not having it together as of yet, Kristina remains the light-hearted sister. She may be in turmoil inside; however, she is accepting, fun and seemingly carefree towards others. She is by far the most accepting and liberal of all the girls.

The baby of the family defiantly takes the prize for being the most like Alexis. Molly, daughter of Ric Lansing (Rick Hearst), is smart, feisty and completely willing to tell it like it is. Though she seems self-righteous at times, she is usually not wrong. She may be young, but she certainly has a conservative old soul.

Vote below to have your say… which Davis girl is your favorite?

Do you favor Sam’s edgy big sister personality, Kristina’s carefree ways or Molly’s old spirit? What do you think the future holds for your fav? Are things looking bright for the Davis girls or will Alexis take them down with her and Julian? Comment below and let us know. Also, come back to Soap Opera Spy every day for more ‘General Hospital’ spoilers plus interviews, news and more.

‘The Young And The Restless’ News: Greg Rikaart Announces Birth Of His Baby Boy Montgomery