‘General Hospital’ News: Robin and Patrick’s GH Goodbye – A Look Back at the Scrubs Love Story 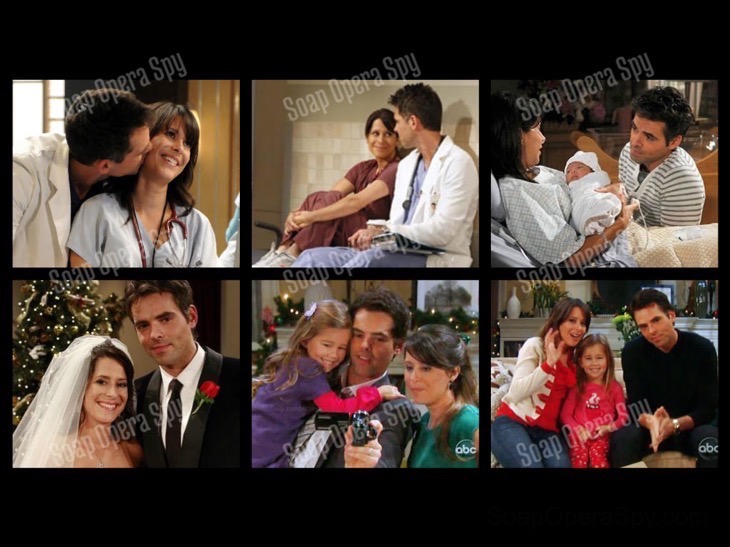 ‘General Hospital’ (GH) screened a landmark episode as Patrick Drake [Jason Thompson] left the show for good. This has been one of the hardest goodbyes of many recent major character departures. We lost Luke Spencer [Anthony Geary] not too long ago and then Silas Clay [Michael Easton].

We saw Patrick, Robin and Emma march off giddily into their new life and new adventure today after their quickie home wedding. This was a tough one to watch – the wedding was so sweet – and Robin and Patrick’s vows to Emma – wow – not a dry eye in the house.

When Anna Devane [Finola Hughes] bid a tearful adieu to the trio, she was channeling our heartbreak as we watched them go, knowing it would never be the same again. As the happy family departs, here’s a look back at some of the magical moments that made the Scrubs love story so endearing to fans…

Think back to when Dr Drake was so young and cocky and Robin shot him down as he tried to ask her out. Since then, there love has grown into an epic legacy story that TV Guide once called one of soaps’ most “unique and touching love stories.”

It’s incredible to think how far they’ve come, particularly since Robin first met him when she found him shagging a nurse in a patient room. Then there was the sweet moment when Robin confirmed her HIV positive status to Patrick when she was hospitalized at GH.

But everything with them has not always been sweetness and light – and that’s what gave depth to their relationship. Robin told Patrick that she wasn’t interested and shut him down at every opportunity – until she was ready. And when she was ready, it wasn’t for love – just lust.

The duo finally broke through at an emotional level when Patrick had his own HIV scare thanks to a surgical accident and her no-nonsense approach to his crisis. Robin and Patrick soon declared love, but even then it was not smooth sailing!

You’ll remember they almost called it quits for good after a pregnancy scare woke Robin up to the fact that Patrick didn’t want the same things in life she did – a home, marriage, and kids. After all they had been through, they split again much to the chagrin of legions of die-hard Scrubs fans.

Robin had to turn her back on Patrick to have the family she wanted – but then as luck would have it, an unreliable condom gave them the daughter they would grow to love beyond belief. You’ll recall he made a jail house proposal when they were at the PCPD lockup.

Robin still wasn’t sure, but after Patrick declared love over the GH PA system, they were a go. Too bad their first wedding was interrupted by the birth of Emma but they soon made it right with another ceremony and finally got their I do’s.

They sang karaoke, loved each other, and planned for their dream home – then events conspired to tear Robin away from the family she always wanted. Patrick thought Robin dead in the Crichton-Clark explosion and the guy who never wanted a family found himself a single dad mourning his wife.

Then Robin came back to Patrick and Emma just as he was moving on – she broke up the new family he was making – but now we see it was all for a grander design at the end.

Then Patrick lost Robin again – and this time thought she left them intentionally. Not long after they renewed their vows – with Emma officiating – and a host of fluffy witnesses – she was lost to them again yet Robin never stopped loving Patrick and Emma – even while they were moving on without her.

But after a rescue that almost turned into a Shakespearean tragedy, Robin was restored to her family and Patrick realized she never meant for a moment to leave them. Now they’re off on their new adventure and GH fans likely won’t see the three again, but at least they got their happy ending!

But at least Scrubs fans were left with a little hope – remember Anna gave Emma a plane ticket and made her promise to use it soon. Hopefully it won’t be too long before Emma comes back to Port Charles to visit, even if it’s a solo excursion.

It’s the end of the Scrubs era and, so often, departure storylines don’t feel quite right – but this one was picture perfect. It was the happy ending everyone deserved – except perhaps for GH fans who don’t want to see the Scorpio-Drakes leave Port Charles.

Tune in to Soap Opera Spy every day for more ‘General Hospital’ spoilers, news and updates!

‘Days Of Our Lives’ Spoilers: Hope Continues To Unravel, In Danger After Stefano Confrontation – Can Rafe Save Her?