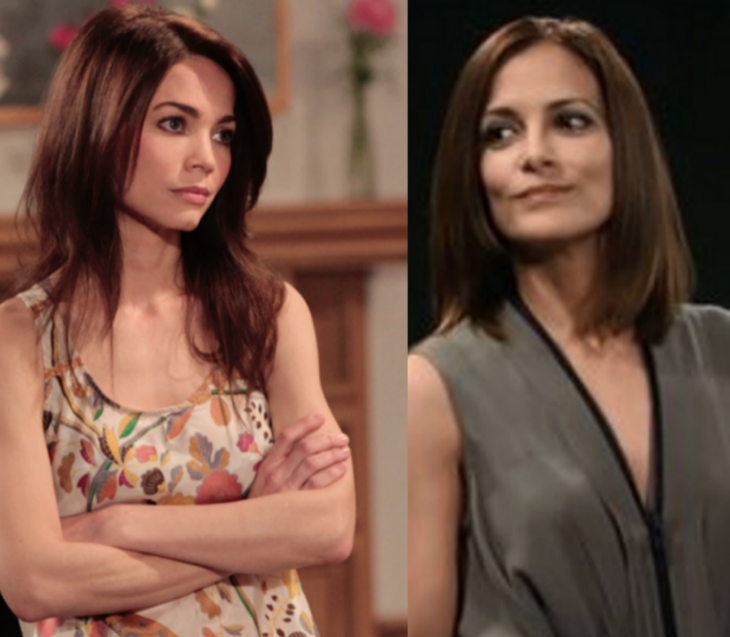 There is little doubt in the mind of any ‘General Hospital’ (GH) fan that Elizabeth Webber (Rebecca “Becky” Herbst) and Hayden Barnes Cassadine (Rebecca Budig) absolutely despise each other. They have been at each other throats, pretty much since the day Hayden Barnes (aka Rachel Berlin) arrived in Port Charles.

First it was Hayden pretending to be Jake Doe’s (Billy Miller) wife, after she was hired by Liz’ ex-husband, Ric Lansing (Rick Hearst) to keep Liz and Jake apart. When that truth was revealed that not only was she not his wife, but Jake Doe was actually Jason Morgan. Hayden latched onto another of Liz’ exes, Nikolas Cassadine (Tyler Christopher).

You Might Also Like —> Laura Vs. Hayden In Custody Battle – Kiki Blasts Ava About Morgan – Lucy Confronts Kevin

At first it was out of blackmail, but then they genuinely cared for each other, until another bomb dropped revealing that Hayden was actually Rachel Berlin, the daughter of Naomi Dreyfus (Robin Riker) and Raymond Berlin, the man who organized a ponzi scheme on Wall Street and swindled people out of millions of dollars.

Their real-life relationship is much different. These General Hospital beauties have been friends for over 15 years. In an interview with Soap Opera Digest Rebecca revealed, “It all began when she was dancing with Becky’s son Ethan at Super Soap in 2004. “How could we not bond after that night?” Becky Herbst laughs. “My kid was attached to her hip!”

When General Hospital announced that Rebecca Budig was joining the show, both women were thrilled. Things became even more exciting when they learned how intertwined their storylines were going to be, and they would have so many scenes together. Both Becky and Rebecca believe that it’s their friendship that makes the on-screen GH rivals’ dynamics so interesting. “We have these intense scenes and I think there is more depth to them because we like each other. But today she almost made me cry and I was like, ‘I can’t cry. My character would not cry in front of her!’” Rebecca Budig said in a recent interview.

Do you like the rivalry between General Hospital’s Liz and Hayden? Or do you think there is far too much bad blood between the two for them to ever be friends on-screen as well? Be sure to tune into ABC’s General Hospital daily and check Soap Opera Spy often for spoilers, updates and news!

‘The Young and The Restless’ News: Jerry Douglas Returning to Genoa City

‘Days Of Our Lives’ News: Dena Higley Back Writing At DOOL