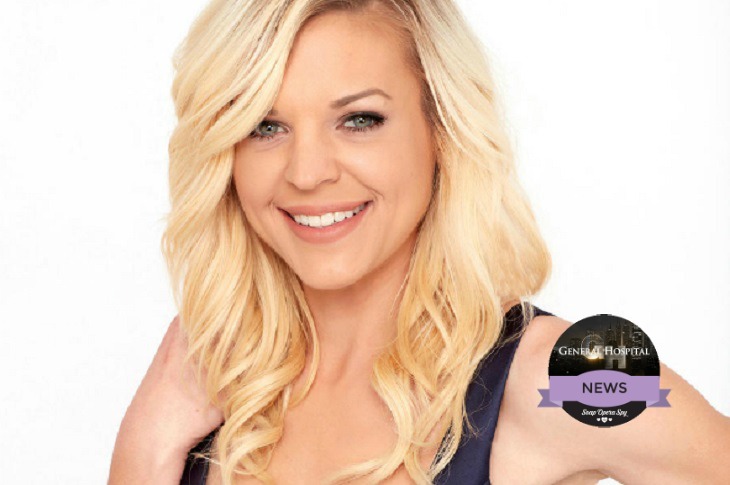 “General Hospital” fans put away the get well cards, Kirsten Storms has returned to the long-running role of Maxie Jones.

ABC has confirmed that Storms will reprise the role of the fast-talking fashionista on August 3. During Storms’ leave Molly Burnett (ex-Melanie Jonas, Days of Our Lives) stepped up to take a temporary walk in Maxie’s high heels.

Burnett first appeared onscreen last week. Storms stopped taping in late May and returned to the set in late June. She checked into GH in 2005.

In May Storms addressed her leave of absence on her Twitter account, thanking fans for their support and attributing her absence to, “some skin issues I’ve been having.” She also inferred that the skin problems may be stress-related.

Some speculated that the taping break was connected to her real-life break-up with husband and GH costar, Brandon Barash (Johnny Zaccara). The two share a 2-year-old daughter, Harper, and are divorcing.

This is the second time Storms has left and returned to her GH role. In 2011 she took almost a year off from GH in order to deal with medical issues, at the time rumored to be a serious case of endometriosis.

Maxie Jones is reeling from the recent appearance of her boyfriend Nathan’s (Ryan Paevy) ex-wife, Claudette (Bree Williamson). Complicating matters, Maxie unknowingly hired the minx when she showed up using her initials, C.J. What fresh trouble will Claudette bring to Maxie and Nathan before their nuptials?

With the blonde and flirty Claudette in town, should Maxie be worried about her relationship with GH’s handsome detective? During the first lunch together, the exes recalled their past, including their oh-so-romantic marriage of convenience. Nathan demanded that the woman he married, so she could get a green card, reveal the name of the man he caught her in bed with. Seems that visual caused Nathan to discharge his revolver at the guy, a memory he wants to make amends with.

Claudette wasn’t eager to soothe Nathan’s mind, instead reaching out to soothe his hand. Whatever Claudette’s after, it’s sure to keep GH viewers, and Maxie, busy all summer.

‘General Hospital’ Spoilers: Darby Returns and Hooks Up With Dillon – New Couple In The Works?