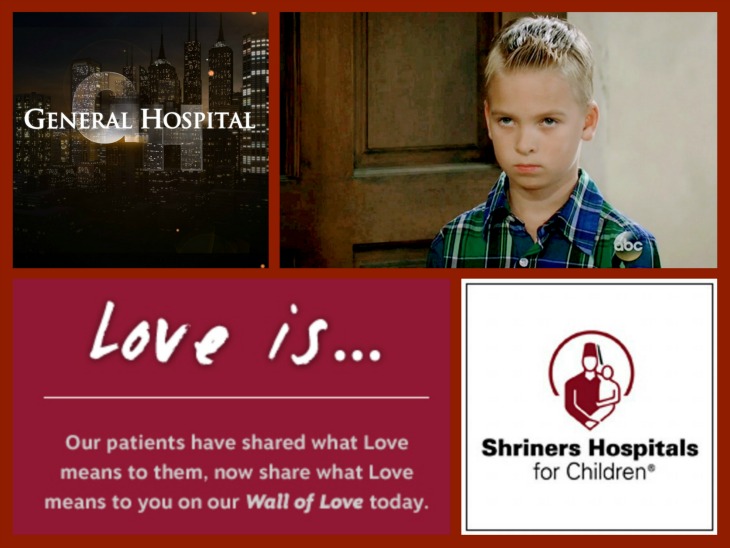 “Shriners Hospital For Children” got major, well-deserved, recognition last year when “General Hospital” (GH) Spencer Cassadine (Nicolas Bechtel) was in the burn unit after the fire at Wyndemere at the end of his birthday party left him badly burned. The hospital is known for treating burn patients and the doctors at GH, then Dr. Patrick Drake (Jason Thompson), suggested it was in Spencer’s best interests to have him transferred to the Boston location.

According to the February 8, 2016 issue of Soap Opera Digest, Shriners Hospital for Children and General Hospital will once again be coming together, this time to help Little Jake (James Nigbor) with his yet unnamed mental condition which, as we saw on Friday’s episode, seems to come to a head when Sam Morgan (Kelly Monaco) falls down the basement stairs at Elizabeth Webber’s (Rebecca Herbst) home.

This incident at Elizabeth’s seems to be the icing on the cake and is set to have a ripple effect. Elizabeth and Jason Morgan (Billy Miller) were made aware of Jake’s drawings and their dark and disturbing nature while talking with Franco Baldwin (Roger Howarth) when Jason brought in Jake’s drawing of Sam. Jason became a bit alarmed when he recognized the “woman in black”… whom Jake described as, “an evil woman from one of my video games”, and when pressed further by Jason about which game, Jake closed his eyes and lied, saying he didn’t know which one. Once the babysitter arrived, Jason took the drawing and headed off to alert Elizabeth.

“Shriners Hospital for Children” has 20 locations throughout the United States and joins ABC for its “Love to the Rescue” campaign once again. Port Charles, a fictitious city in New York, will once again be at the Boston-based Shriners as it is the closest location to NY.

Be sure to continue to watch the episode around Sam’s fall unfolds on Monday and the drama escalates. Will Jake leave Sam on the basement floor? Will he run upstairs calling out for the baby-sitter? Will Jason find Sam in time?

This reporter will most definitely be watching!!