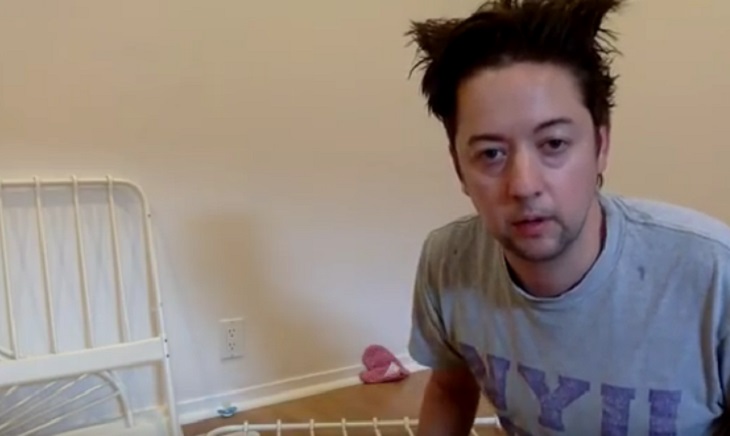 If you’ve ever had a DIY project get the best of you, then you’ll commiserate with Anderson as he struggles to whip a harmless pile of metal parts into a sleek and modern Ikea bed. What could be simpler, right?

Anderson captioned his Instagram post, “THE FEEL GOOD MOVIE OF THE…day,” but that’s a scandalous understatement! Anderson’s video is laugh out loud funny, and even has a sneaky little twist at the end that I promise you won’t see coming!

Like millions of DIY’ers everywhere, Anderson starts out fresh and hopeful: He’s sitting on the floor surrounded by the steely white parts and pieces, master of his universe!

Hope is his friend as he stares at the camera and claims that the assembly will be, “Pretty simple, not too many pieces.”

The happy train keeps rolling when he notices that the instruction manual has just a few pages!

Next up is the image of a clock, set at 6:02. Tick, tock, the time goes by until…time starts racing! More than an hour flies by and Anderson is back in the frame, sweaty and frazzled.

Related: Alexis Breaks Down In Court – Carly Introduces Nelle to Nina – Will Julian be Freed On Technicality?

His hair looks like it lost a fight with a blow dryer, but he’s still in control, kind of: “I assure you, I’m making good progress….I’ve misplaced a piece of …”

What happens next is not for the squeamish, hint-hint, wink-wink! I won’t spoil the surprise, you’ll just have to check out the film noir for yourself!

Of course, Anderson got lots of sympathy and support from his loyal fans! “Awww…Once u get it put together, u’ll always look at that bed with such pride; self satisfaction…or cuss at it!” “I know the so called instruction manual is ridiculous,” “I feel your pain. I have a dresser that still needs drawers,” “You poor thing!!!!,” were a few of the condolences.

But, in addition to feeling his pain, Anderson’s fans also gave him a little good-natured ribbing: “looks like someone slept on the floor that night,” wrote one joker.

How long will Anderson’s current stint on GH last? Be sure to read all the updates on Soap Opera Spy to find out!