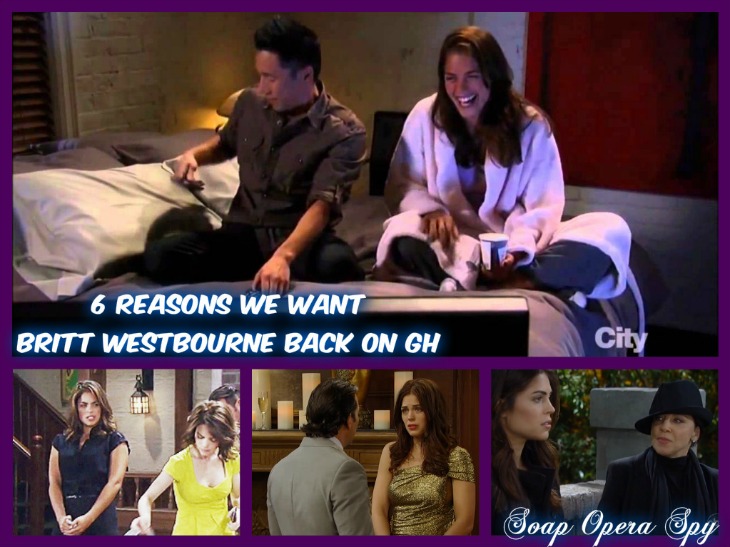 ‘General Hospital’ (GH) recently saw the exit of Patrick Drake [Jason Thompson] and other characters have left – Luke and Shawn – plus some are rarely seen such as Ric Lansing [Rick Hearst]. It would be nice if showrunners reversed this trend and brought back a favorite like Britt Westbourne [Kelly Thiebaud].

#1 Britt and her evil mom are magic

One of the best things about Britt is watching her interact with her murderous mom Dr Liesl Obrecht [Kathleen Gati]. Britt always wants her mom’s approval and Liesl is always planning some scheme to get her daughter where she thinks she should be. More of that please! Liesl doesn’t have a foil right now since Franco [Roger Howarth] is busy and the other baddies are gone – so her daughter is needed.

Nathan West [Ryan Paevey] is rumored to be the son of someone who is ultimately evil. Britt knows what it’s like to be the spawn of Liesl and a bad man since Cesar Faison (Anders Hove) is her pops. When Nathan’s dad finally shows up, Britt can be there to help him cope. Plus, Nathan and Britt haven’t had the chance to really hang out – they need to do some sibling bonding stat!

#3 Nikolas may need her

Sure Nikolas Cassadine [Tyler Christopher] broke it off with Britt, but she was another bad girl that he loved. Now he’s got Hayden Barnes [Rebecca Budig] in his life and Britt and Hayden would be wicked rivals. Just imagine the cat fights over the prince – that would be amazing. Plus with Nikolas trying to be Port Charles’ new villain, Britt could help him – we know she knows how to scheme.

Spencer Cassadine [Nicolas Bechtel] likes Hayden okay, but he and Britt really bonded. Spencer and Britt were partners in crime, companions and playmates. Spencer would love to have Britt back in his life – and his dad’s – that would be a sweet reunion. Plus, Spencer needs to know that Britt would come back for him, even if things didn’t work out with his dad.

Britt’s BFF Brad Cooper [Parry Shen] has been dealing with his marriage crisis with Rosalie Martinez [Linda Elena Tovar] and Lucas Jones [Ryan Carnes]. Britt could be a source of comfort and once he gets a divorce, she can be the best woman at his wedding and help plan the whole shindig. Anytime Brad and the Britch are together, it’s an episode worth watching!

#6 Morgan and Britt could be great

Even if Hayden has her hooks solidly into Nik, there’s another romantic pairing that would work for Britt. How great would it be to see Britt with Morgan Corinthos [Bryan Craig] – her real life honey bunny? We know they have killer chemistry off-screen, so why not try them on-screen as a couple as well. And since Britt is a doc, she can help Morgan manage his meds and medical issues.

Britt’s redeeming qualities are that she’s relatable. She just wants to be loved but sometimes goes overboard to make it happen. That’s why Liesl is able to manipulate her so easily. Britt wants to be good – but she’s oh-so-good at being bad. And we need more of that in Port Charles.

What do you think GH fans? Would you like to see more of Britt Westbourne? Share your thoughts in the comments below and be sure to check back with Soap Opera Spy often for daily ‘General Hospital’ spoilers, news and more.

‘Days of Our Lives’ POLL: Which Lady Will Catch Deimos Kiriakis’ Eye? A Good Girl Or A Bad Girl – VOTE!