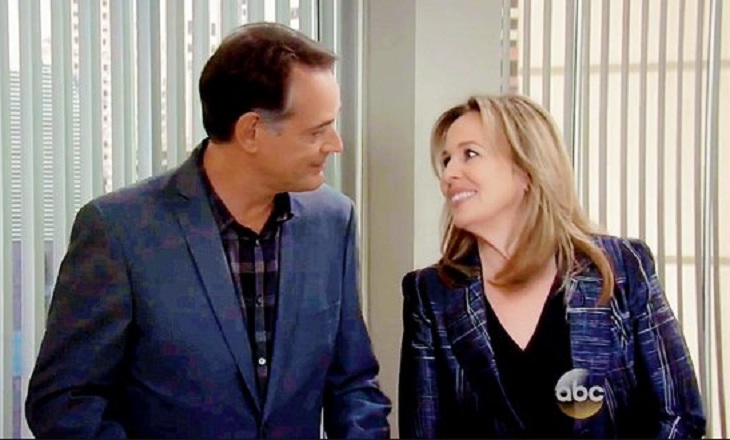 We have recently witnessed on General Hospital a relationship beginning to blossom between Kevin Collins (Jon Lindstrom) and Laura Spencer (Genie Francis). It was a rumor for a long time now that soap icon Genie Francis would have a new love interest on the show after years of being in a romantic entanglement with Luke Spencer (Tony Geary) or Scott Baldwin (Kin Shriner) and it has finally happened.

On-Air On-Soaps recently got a few comments from Jon Lindstrom while at the GHFCW event and this is what he had to say about being teamed up in a romantic story with Genie Francis “Working with Genie is awesome. When I found out I was going to be working with her I was like ‘what? Me!? But Genie wanted a storyline and somebody to work with, and I have known Genie on and off for 20 years.”

When asked if he would like to see Kevin and Laura be a lasting long-term duo on GH he replys with “You know, at my age, if you’re not Kevin Costner or Bill Paxton, your happy to have a gig. This is a gig that I have always liked, So I will probably take whatever they throw at me. If they pitch, I will catch.” So GH fans would you like Kevin and Laura in a long term relationship? It would be refreshing to have a new couple.

Related: Emme Rylan Dishes On ‘GH’ Baby Drama – Do Lulu And Stavros Have A Secret Baby?

Do you think Kevin and Laura has what it takes to become GH’s next supercouple? Are you ready to see what’s in store for them?  Or is it hard to imagine Laura Spencer with anyone other than Luke Spencer? Hopefully things will go far with the two but we will just have to wait and see what the writers are gonna do with this storyline!  Let us know what you think in the comments below and don’t forget to check Soap Opera Spy daily for all of your ‘General Hospital’ spoilers and news!

‘The Young And The Restless’ Spoilers: Victor Confesses To Nikki He’s Responsible For Adam’s Situation, Promises To Fix It – Can Victor Get His Son Freed?

‘The Young And The Restless’ Spoilers: Hilary Lashes Out Against Neil, Declares Ex Her Next Victim – Will Devon Side With His Father Or Wife?