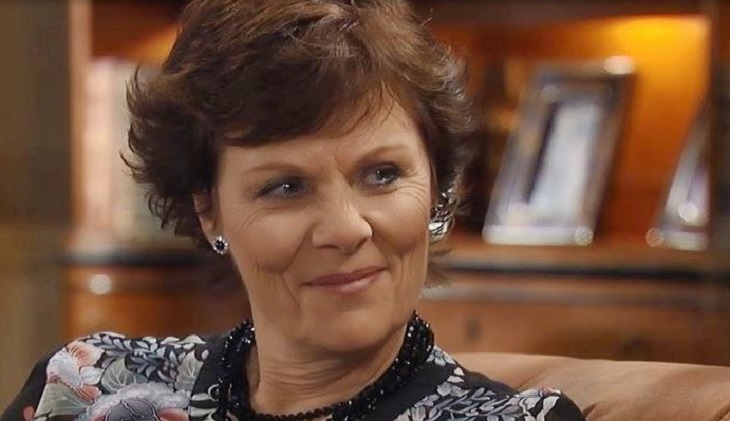 Despite Jane Elliott’s love for her friend, Tony Geary, and Tracy Quartermaine’s love of Luke Spencer, had Luke’s larger-than-life shadow not retreated from the General Hospital (GH) canvas, Tracy would not be getting the rich storylines she is now on the show, said Elliott to Michael Logan in an interview published in next week’s TV Guide.

After all, said Elliott, “Tracy is an addict and Luke was her drug.” With Luke constantly drawing her in, Tracy would not have the wherewithal to battle Nikolas for ELQ nor the spontaneity go on a tropical vacation retreat on a whim.  Logan’s article declares that Elliott stands alone in daytime as a once wonderfully familiar sight in: strong, rich, commanding divas who led their families and took no prisoners in their personal or professional lives.

Related: Who Will Win The 2016 Emmy For Outstanding Actor & Actress? VOTE!

Elliott’s answers to Logan’s questions dripped with Tracy’s inimitable brash, lovable battle-ax attitude. For instance, Logan pointed out how “harrowing” Tracy’s seizures were to see for us viewers. Elliott responded that she was lucky to have “young, buff actors” to catch her every time she dove toward the floor, convulsing. “I’m not some 95-pound ingénue. I’m a substantial, almost 70-year-old woman, and they were terrified of dropping me. I’m like, ‘Good luck to ya’ boys!’”

In an industry in which actresses of all ages plump, fill, and paralyze their faces to remain cast-able, Elliott looks refreshingly unaltered—and beautiful. And when was the last time an actress over 30 casually mentioned her age in passing to an interviewer?

The most titillating part of the full-page story on Elliott came in a sidebar about her 51 years in showbiz. She starred in a film with Elvis Presley, “Change of Habit.” Given Presley’s well-known penchant for womanizing, Logan asked if Elliott succumbed to his charms during the filming of the movie. “I’m not going to tell you that we didn’t sleep together,” said Elliott. One can almost see Elliott throwing her head back in a Tracy-like, brazen laugh.

In addition to GH, Elliott has appeared on Guiding Light, All My Children, Days of Our Lives, and Knots Landing.

Who Will Win The 2016 Emmy For Outstanding Actor & Actress? VOTE!

‘The Young and the Restless’ Spoilers Thursday March 31: Sage and Nick Stunned When Shawn Goes Into Labor – Mariah Jealous of Natalie’s Bond with Kevin