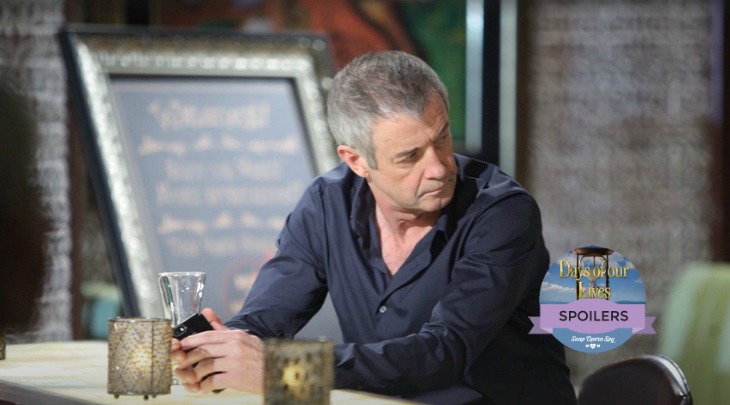 “Days of Our Lives” spoilers for Friday, September 16, tease that Kate (Lauren Koslow) will face some tormenting. Clyde (James Read) didn’t appreciate being dumped and he’s back to show Kate who’s boss. As he points a gun in Kate’s direction, he’ll taunt her about the situation. Kate thought Clyde had a big ego before, but she hasn’t seen anything yet.

Fortunately, Chad (Billy Flynn) just arrived and he’ll be looking for an opportunity to rescue Kate from this monster. Clyde is extremely dangerous, but Chad will try to outsmart him. He’ll need to wait for the right moment. If Chad doesn’t plan this carefully, Clyde could end up with two victims instead of one.

“Days of Our Lives” spoilers suggest that Chad will manage to save the day. However, the dramatic rescue will probably just make Clyde even angrier. DOOL fans know that Clyde already has a major grudge. He blames Chad for Ben’s (Robert Scott Wilson) issues and he intends on making this DiMera pay the price.

Of course, Clyde is part of a vengeful team and they’ll all need to meet up soon. “Days of Our Lives” spoilers indicate that Xander (Paul Telfer), Orpheus (George DelHoyo) and Clyde will pick a secret location where they can plot. This home base could prove useful as they continue to wreak havoc in Salem.

At the police station, Theresa (Jen Lilley) will worry that Nicole (Arianne Zucker) could be the next stop on Xander’s revenge tour. “Days” spoilers say Theresa will offer a warning about Xander’s plans. He wants to cross everyone off his hit list and Nicole is certainly on it.

Still, Xander’s previous feelings for Nicole could help slightly. It’s possible that Nicole could prey on any lingering lust Xander might have. We’ll give you updates as other news comes in.

Meanwhile, things will be a bit calmer at the hospital. Steve (Stephen Nichols) and Kayla (Mary Beth Evans) will have a deep conversation as she recovers from her surgery. These two are inching toward a reunion, but the prison escape poses a risk to their happiness.

There’ll be a little more conflict for Kayla and Steve, but they’ll work it out eventually. They need to stick together, especially when three convicts are on the loose. “Days” rumors hint that some shockers are on the way. Stay tuned to DOOL and don’t forget to check Soap Opera Spy often for the latest “Days of Our Lives” spoilers, rumors, updates and news.