‘Days Of Our Lives’ Spoilers: Steve Gets An Eyeful When He Sees Fynn With Kayla 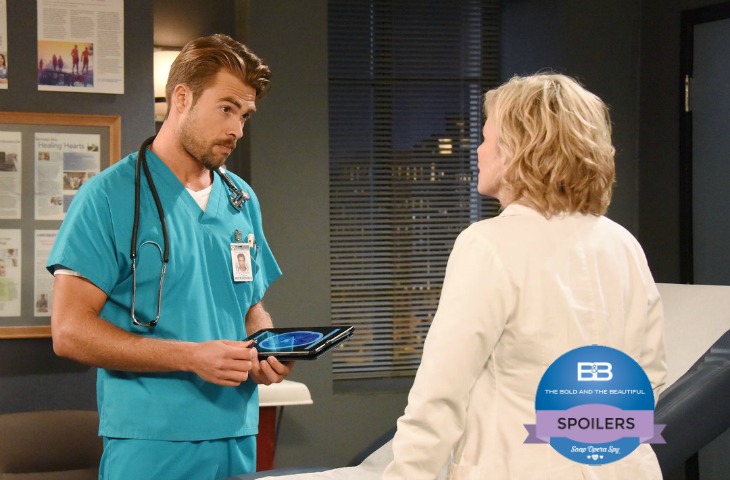 The week “Days of Our Lives” starts off with Steve (Stephen Nichols) and Eduardo (A Martinez) talking about how their dangerous lifestyles were responsible for how they lost the women that they love. In addition to the women that they lost, they also lost time with their children. Steve asked Eduardo for a favor. Steve wants the former hitman to help him get Kayla back in his life. What Steve doesn’t know is that Fynn (Alexander Bruszt) has other plans in mind for Kayla (Mary Beth Evans). Fynn is tired of just being Kayla’s friend and wants her for himself.

You Might Also Like —> Claire Makes Choice About Future, Shawn, and Belle Bicker – Nicole Bonds with Dario, Deimos Wants Her Back

Kayla gets a shock when Fynn decides to move things forward with her. He pulls her into a passionate kiss. They have an unexpected witness to their kiss…it is Steve. Steve is upset by what he saw, but he keeps his feelings to himself. He doesn’t let on to Kayla that watching them kiss upset him. Steve doesn’t confront Kayla about her feelings for Fynn.

Kayla talks to Fynn about the kiss that they shared. She lets him know that she isn’t ready to move on with her life just yet. Fynn has strong feelings for her and doesn’t see a problem with them being together. Kayla isn’t over Steve and they are dealing with their issues. She also has to deal with all of the trouble that Joey is getting into lately. She doesn’t feel that she has time to start a new relationship with Fynn.

Steve decides to let Kayla know that he will no longer be working with John. Steve wants to take a job that will keep him from living a dangerous life. The news doesn’t go the way he planned. Kayla doesn’t rush back into his arms the way he thought she would after hearing his news. She still wants to remain friends instead of getting back together. Will Steve be able to win the love of his life back? Will Fynn be able to persuade Kayla to give him a chance?