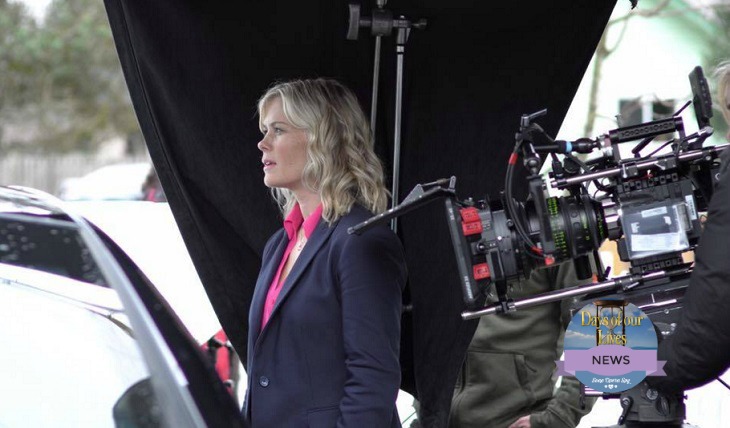 For those who are missing Alison Sweeney in her role as Sami Brady on ‘Days of Our Lives’ – gear up to see more of her on a new Murder She Baked. Sweeney took to Facebook and Twitter yesterday to share the news that she is getting started on a new installment of Murder She Baked. She released a photograph of her on the set filming and shared “Getting started on a new #MurderSheBaked Cameron Mathison, Barbara Niven & the cast are going to be answering your questions behind the scenes. Post here what you want to know! Hallmark Movies & Mysteries”.

Sweeney plays the lead role of Hannah Swensen in the Hallmark TV Movie. She acts alongside former soap star Cameron Mathison who plays Mike Kingston. Hannah is a baker located in a small town. She turns amateur sleuth after discovering her friend has been shot to death. This will be another exciting film to watch when it premieres on The Hallmark Channel.

Sweeney played the popular role of Sami on Days for almost two decades leaving many fans disappointed when she exited the series. Sweeney is also popularly known for hosting ‘The Biggest Loser’ since 2007 and since then exiting at the end of 16th season in 2015. Since her exit from Days, she has appeared in the three installments of Murder She Bake:  A Chocolate Chip Cookie Murder (2015), A Plum Pudding Murder Mystery (2015) and A Peach Cobbler Mystery in 2016. A part from her acting, Sweeney also spends time directing and producing when she can. She has directed a couple episodes of ‘General Hospital’ in recent times.

So Days and Sweeney fans, how have you been enjoying the previous installments of Murder She Baked? Are you anticipating this one Sweeney teased about? What are you hoping to see in this all new Hallmark movie?  Share your thoughts in the comments below!

‘The Young And The Restless’ News: Watch Jason Thompson’s Hallmark Channel Interview On ‘Home And Family’