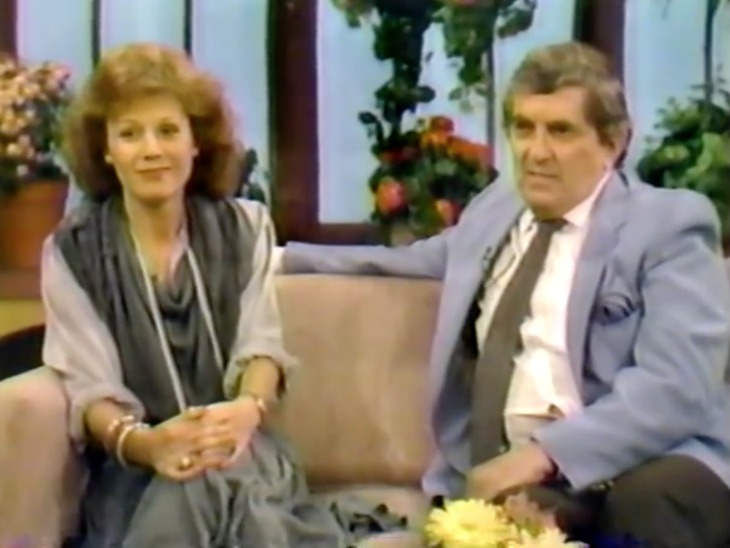 Thirty years later the interview can be found on YouTube. Jonathan Frid, an actor who fiercely guarded his personal life, opened up and revealed fond memories of his time on the daytime drama. It may be a little-known fact, but Jonathan’s vampire fangs were specially designed for him by a dentist. At the time of the interview in 1986 Jonathan still had his original vampire fangs.

According to Jonathan it was very difficult to speak with the fangs in and he would wait to the very last moment, while the camera was turned on the person who was to be frightened by the vampire. Jonathan revealed he would very quickly pop them in.

Late in the interview Jonathan praised Kathryn Leigh Scott’s book ‘My Scrapbook Memories of Dark Shadows.’ The book contains many behind the scenes stories, bloopers and the funny things that happened.

Jonathan Frid commented that Kathryn Leigh Scott’s book reads almost like a documentary. “She’s got in the back of the book, which is my most favorite part of the book. It’s has every actor who’s ever in it and the parts they played.”

The list in the back of ‘My Scrapbook Memories of Dark Shadows’ also list all the technicians and behind the scenes crew that put together the gothic soap opera that went life Monday through Friday for four-and-a-half years.

At the time of the interview with Gary Collins for ‘Hour Magazine’ Jonathan was putting together a one-man show called ‘Jonathan Frid: Fools and Scenes,’ a compilation of short stories and poetry.

‘The Young and the Restless’ Spoilers: Jack Keeps Phyllis In The Game – Phack Isn’t Dead