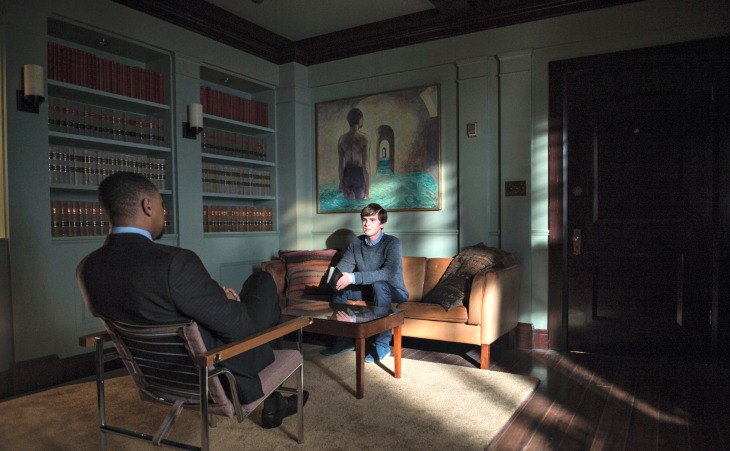 Bates Motel Season 4 deleted scene from the finale left fans scratching their heads wondering if Dr. Edwards (Damon Gupton) will return next season. Norman Bates (Freddie Highmore) promised his therapist that he’d meet with him several times a week to continue his quest to overcome his mental illness. Something tells us that Norman may go back on his word.

What could have given us that impression? Maybe it was when Norman descended into FULL on Psycho mode and tossed his pills in the toilet. He tries to pull off a murder/suicide plan with his mother, Norman (Vera Farmiga) and failed on the suicide part.

Norman decides he cannot live without Norma in his life, he digs up her body from her grave and glues her eyelids open. To make matters worse for Norman, he lied to his brother, Dylan (Max Theriot) and avoided giving him the news that Norma passed away.

The fans felt for Norman as he seemed to feel like he was alone, and most of all, scared about the future. Then, all the sudden, Norma appeared along with Norman’s dog that died in Season 2—at least that’s how it looked. It is all in Norman’s mind, and will tie into the Psycho movie.

TV line reported that initially Dr. Edwards was supposed to appear on the Season 4 finale, but for some reason, his scenes were cut. And, that’s not all—it looks like his future on the show is not yet known, so we may never see him again.

Movie News Guide reported the scene was Dr. Edwards visiting Norman and found out the truth about Norman. It looks instead of Chick (Kevin Rahn) appearing to Norman, in the end; it was supposed to be his doctor. The writers decided to go another way and let’s hope it is addressed in Season 5.

When you think about it, there is no use for the shrink in the storyline anymore. He served his purpose of diagnosing Norman as multiple personalities and helping Norman work out some of his issues regarding his father, Sam.

The showrunner revealed that Dr. Edwards involvement in Norman’s life is no longer needed because if he knew that Norman killed his mother, it would kill the mystery in the series. They needed him to disappear, and Norman to descend into madness, giving the viewers a front row seat to his crazy train and not know when Alex (Nester Carbonell) would bust in and read Norman the riot act.