‘Young and the Restless’ Quiz: Tracey E Bregman vs Christian LeBlanc Face Off 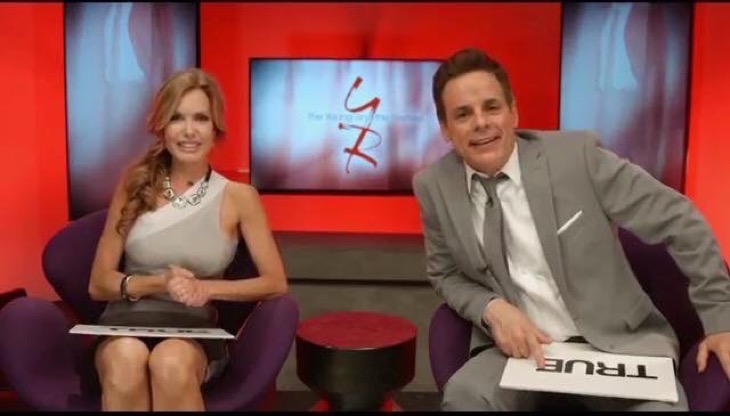 On a recent Y&R Co-Star Quiz, “The Young and the Restless” stars Tracey E Bregman [Lauren Fenmore] faced off against Christian LeBlanc [Michael Baldwin]. Here’s a look at the questions so you can test your character knowledge as well…

False – she was on Love Boat. Christian got it right.

True or False? Lauren was once involved with Jack Abbott

True – they “did it” in her dorm room bed. Christian got that one wrong.

True or False? Tracey was born in London, England

False – she was born in Munich, Germany. Christian got it right and knew her real birthplace.

True – Tracey says this question was too easy. Christian also got this one right.

True or False? Lauren was the first Y&R character to cross over to Bold and the Beautiful

False – it was Sheila Carter. Christian missed that one.

True – Christian missed this one and says she has a herd of dogs and one large one that hates him.

False – he performed at the wedding. Christian got that one right.

Christian ends up with a score of four – he missed three of the seven questions.

True or False? Christian has appeared as Michael on two CBS soaps

True – he was on As the World Turns as well as Y&R. Tracey got it right.

True or False? Christian was born in New Orleans

False – he was born in Fort Bragg, NC at the Army base. Tracey missed this one.

True or False? Christian’s mother was a dancer with the famous Bolshoi ballet

False – he says his mother would be so proud that she knew that. Tracey got it right.

True or False? Michael and Grace Turner were once in love

True – it was one of Jennifer Gareis’ first scenes on Y&R. Tracey got it wrong.

True or False? Michael has been married two times

True – he was married to Lauren and to Hilary Lancaster. Tracey got that one right.

True or False? Lauren and Michael’s wedding was at the Genoa City Athletic Club

False – they got married at the Colonnade Room. Tracey got this one right also.

False – she says he loved her and was obsessed with her. Tracey got that one correct.

True – Jeffrey is Missy’s father and her father is married to Michael’s mother. She got it right.

False – he speaks English and French. Tracey got that one correct.

True or False? Christian is a natural red head

True – they’re both lying and pledge to go to their graves with that one. It counts as correct.

True or False? Michael proposed to Lauren in Las Vegas

False – Elvis was available to sing and they did a whole Vegas thing. Tracey says she won this.

Tracey ended up with nine out of 11 correct. But that seems unfair since she was asked more questions.

How did you do on the quiz? Did you know all the answers or did you fall short on a few? Share your comments below and be sure to sign up for the Soap Opera Spy newsletter for weekly updates on The Young and the Restless and all your favorite soaps.

‘General Hospital’ Poll: Nina Clay Going Crazy for Real, Can Franco Save Her?

‘The Young and the Restless’ Fashion: Get Sharon Newman’s Joie Blouse For Less – Sharon Case’s Style For Less!