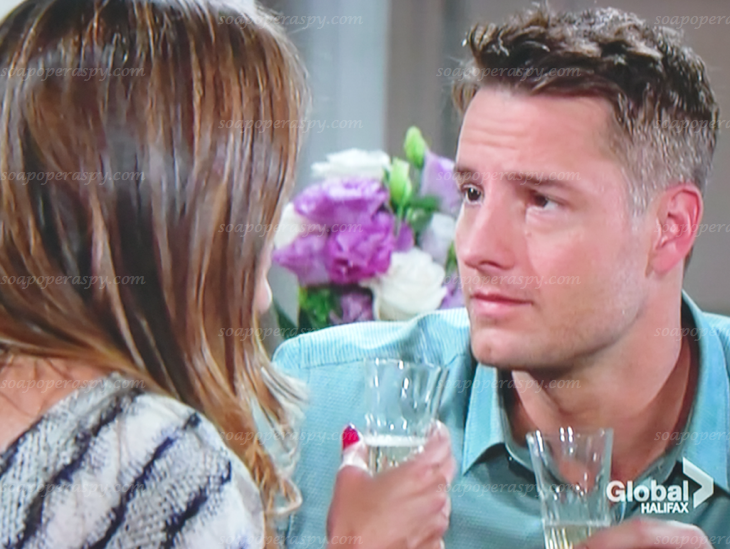 “The Young and the Restless” spoilers for Wednesday August 26, 2015 reveal that Victor and Jack have gathered the Abbotts and the Newmans for the final meeting to dissolve Newman Jabot.  As Jack makes the announcement that both companies will take what they brought into the merger Victor puts two exceptions.  Meanwhile, Adam and Chelsea celebrate their decision to stay in Paris and buy a house. 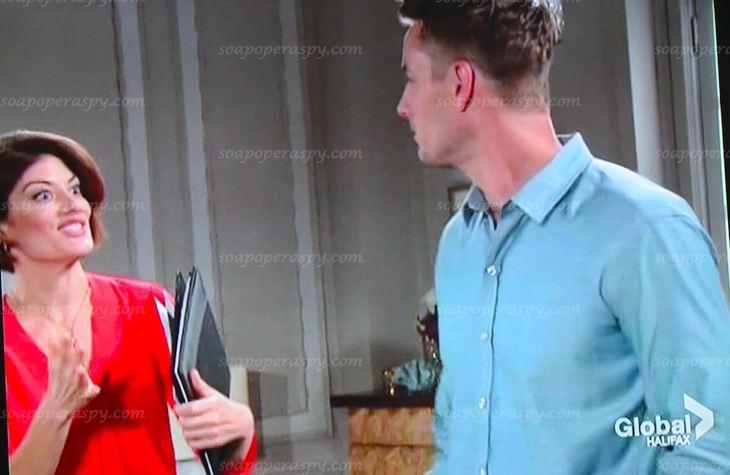 The Wednesday August 26, 2015 episode of “Y&R” opens with Adam (Justin Harley) telling the real estate agent to tell him where to sign. Chelsea (Melissa Claire Egan) comes in and realizes he is buying a house without consulting her and she is not thrilled about it. Adam gets the Real Estate agent to leave and tries to calm Chelsea down she wants to know what he was thinking buying them a house.

Summer (Hunter King) is still wondering why Harding killed three people and asks Phyllis (Gina Tognoni) what she thinks Marco (Peter Bergman) had to do with everything. Phyllis tries to distract her. 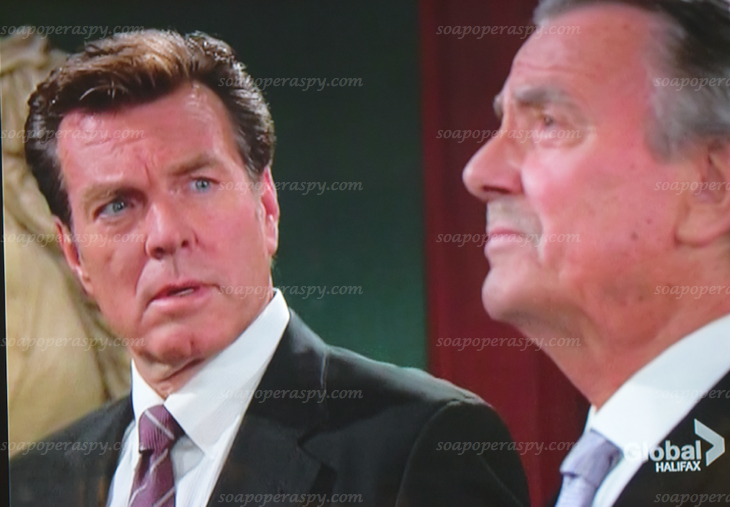 Jack (Peter Bergman) comes to Victor’s (Victor Newman) office and says, “Lets do this.” Victor and Jack called everyone to officially dissolve Newman Jabot and Jack tells Victoria, (Amelia Heinle) Billy, (Burgess Jenkins) Abby (Melissa Ordway) and Ashley (Eileen Davidson) that each company will officially be separate and walk saway with what they had before the merger. Victor says, “Not quite everything.” Jack looks shocked.

At Crimson Lights Sharon (Sharon Case) calls her doctor. She wants to know how soon she can try to get pregnant again. Sharon is not thrilled at the Doctors answer. Dylan (Steve Burton) walks in and asks if everything is okay with the baby. Dylan tells her, “I don’t know what I would do if anything happened to you and the baby.” 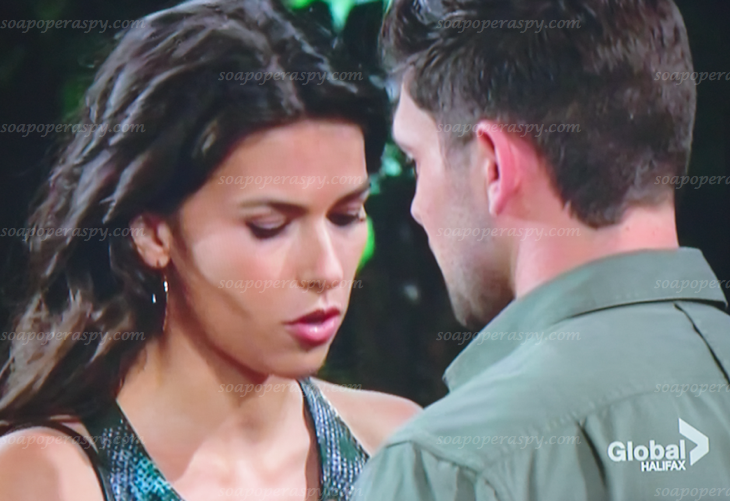 At The Underground, Noah (Robert Adamson) tells Marisa (Sofia Pernas) he is worried about his Mom he found her crying in the park. Noah is worried Sharon is upset Nick (Joshua Morrow) is having a baby with someone else. Nick and Sage (Kelly Sullivan) are at The Underground to and Nick tells her he has to go to a mandatory family meeting. Sage tells Nick his family went all out for the baby shower and she wonders what they are going to do for their wedding. Nick suggests they don’t give them a chance. Nick suggests they keep it simple: Sage, the kids and that is it. Sage agrees. Nick suggests they do it that night. Sage agrees.

Related: ‘The Young and the Restless’ (Y&R) RUMORS: Did A Jealous Gwen Push Hilary Down The Cliff?

Noah comes over and Nick tells him Sage and him and getting married at Sunset at Chancellor Park. Nick is going to tell the rest of the family. Noah offers to help with the arrangements and to tell Sharon. Sage and Nick leave.

Summer gets a text telling her Nick and Sage are getting married at sunset. Phyllis says, “I am sure she is the one Nick knows her for 10 minutes, right. But I guess if you have the chance at happiness you should grab it.” 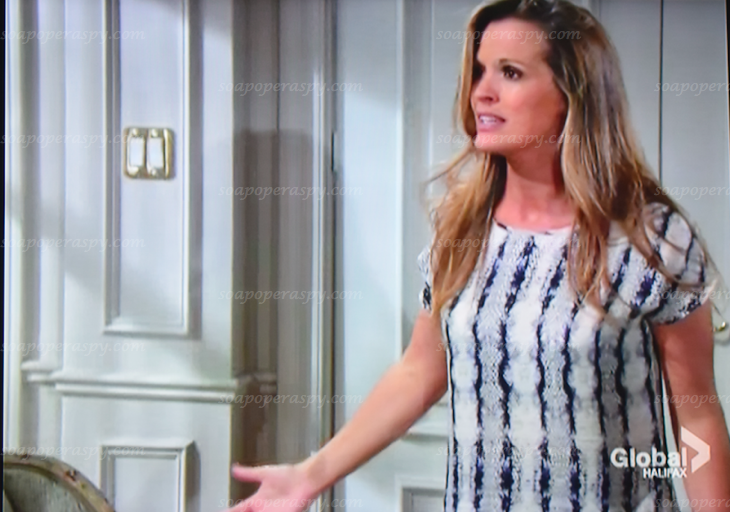 Adam tells Chelsea he did not tell her Jack called because he did not want to lose the moment of their happiness. Chelsea tells him it does not justify lying. Adam tells him words were not working so he wanted the house to show her he is serious. Adam promises to be a wonderful husband and father. Chelsea finally agrees and tells him to call the real estate agent back and tell her yes. 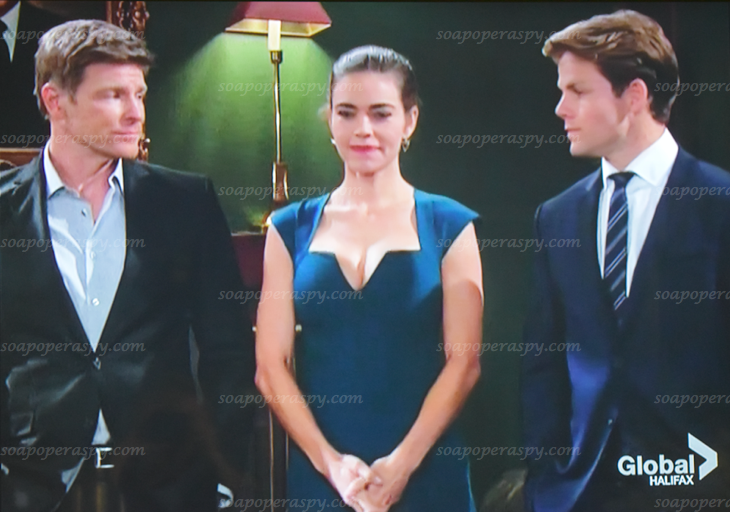 Jack wants to know what Victor is trying to pull. Victor tells them he wants Abby to stay with Newman because she is a Newman. The Abbotts and the Newmans try to convince Abby to go to their companies. Abby thinks and then decides to stay at Newman. Billy is not pleased. Victor then says there is one more thing he wants. He wants to keep Chelsea’s line at Newman. Billy and Jack argue and Nick finally says, “Let wait to see what Chelsea wants.”  Victor says, “I want Chelsea’s line to stay at Newman.”

The owner of the house in Paris interviews Adam and Chelsea and finally agree they can buy her house.

Sage goes to the Athletic Club where Summer and Phyllis are and tell them her and Nick are getting married at sunset. Sage is worried the Newman’s are going to be upset but Phyllis tells her to make herself happy.

Noah arrives at Crimson Lights he tells Sharon Nick is getting married at Sunset. Sharon asks Noah if he came to invite her. Noah tells her no and Sharon gets upset and asks Noah why he thought he had to tell her. Noah says, “You thought my head would explode and I would get upset. I told you I am fine, I have moved on. I am taking my meds and I am fine. I am not crazy.” Sharon storms out. 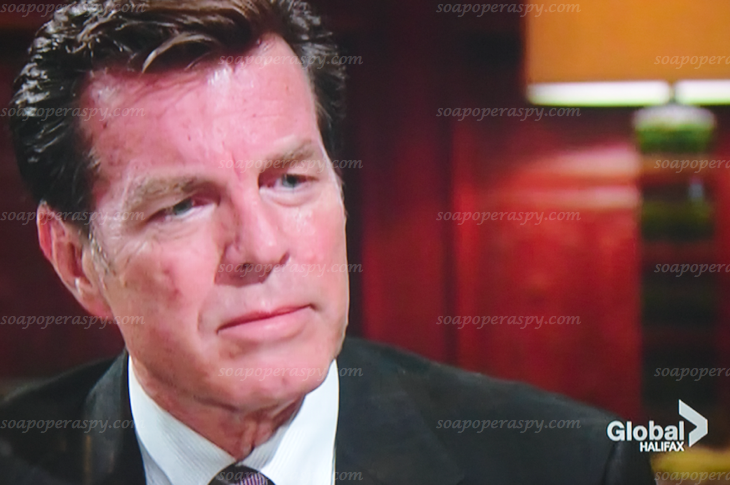 Jack asks Victor if he thinks it is what Victor wants Victor gets he is wrong. Victor tells Jack that Chelsea is a Newman and Connor is a Newman and he wants Connor’s legacy at Newmans. Billy says Connor thinks of him as a father and Victor replies, “He will always be a Adam’s son.” Ashley and Victoria suggest they table the discussion. Jack looks at Victor and says, “Spin this any way you want but if Adam was here the last thing he would want is you to be part of his son’s life.” Jack storms out.

Adam and Chelsea are thrilled and the owner tells them they purchased a wonderful house.

Victor wants to celebrate Newman is back and Nick tells Victor he cannot celebrate because he is getting married at sunset. Abby and Victoria are shocked and says they have to get ready. Nick tells her she does not need time because only he, Sage and his kids will be there. Nick asks Victor to tell Nikki. Victor wishes him the best.

Dylan brings Noah a coffee and Noah tells Dylan he did not mean to upset his Mom but Nick moving on has brought the worse things out in his Mom. Dylan tells Noah the pregnancy is making her sick.

Sharon comes to Marisa and tells her she hopes her sickness does not scare her off. Marisa tells her she is the last person to judge. Marisa tells Sharon she focuses on the fact that Sharon made Noah the amazing man he is. Noah comes over and Sharon tells him she has not been feeling well. Noah leaves. 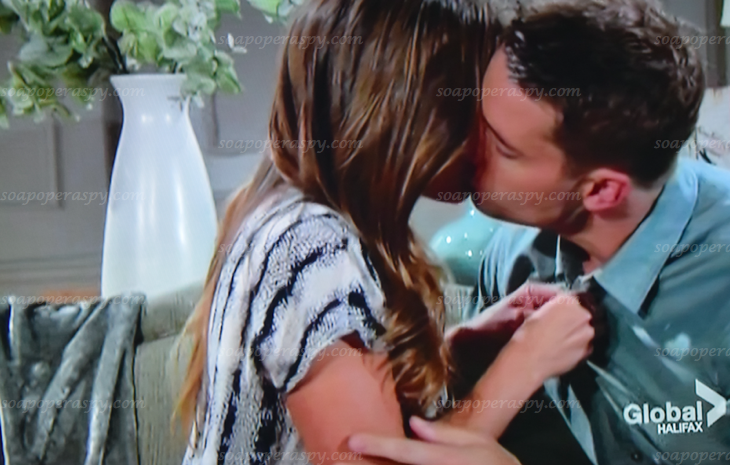 Adam and Chelsea are celebrating and Adam toasts to Chelsea. Adam says there are no words to describe how he feels. They start kissing.

Sharon asks Dylan how he knows the right words to say to make her feel better he tells her it is easy he loves her. He kisses her and she pulls away and tells him she is tired.

Noah is upset and Marisa tells him Sharon will be okay and she has Dylan and Noah should focus on his father.

Sage shows Summer he wedding dress and Summer tells Sage it is perfect. Kyle (Lachlan Buchanan) walks in and apologizes he is late they had a family meeting. Kyle tells Summer it was the usual thing Victor trying to screw his Dad.

Nick tells them they need someone to perform the wedding ceremony. Kyle says he is able to perform marriages in Wisconsin. Nick and Sage agree Kyle will marry them.

Phyllis is happy Jack has Jabot back – Jack is happy to he is just upset about Chelsea. Jack tells Phyllis he thinks it is time to back off of Jabot for a while.

Abby asks Ashley if she thinks she made a bad choice. Ashley tells her it does not matter what she thinks but she thinks she would be treated better at Jabot. Ashley asks Abby to be careful. Abby tells Ashley Ben is moving in with her. 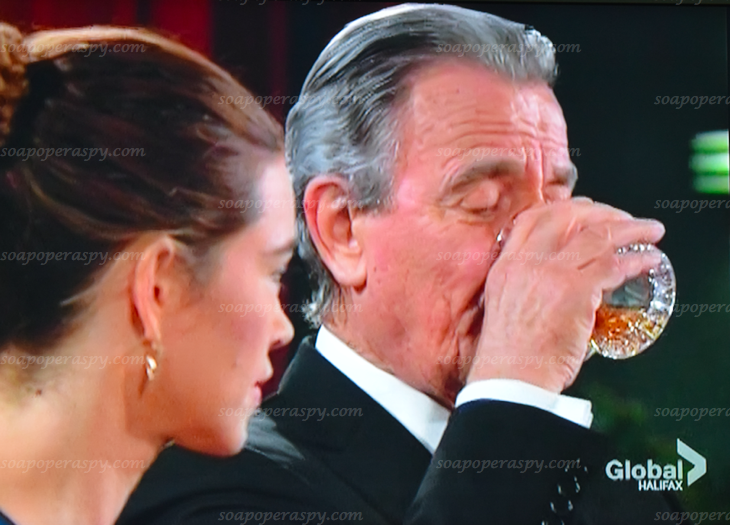 Phyllis asks Jack if he means not run Jabot. Jack tells her he was thinking of letting Ashley run Jabot because he and Phyllis lost months. Phyllis tells Jack she does not have to give up his life for her. Jack tells her he wants to do it for them. Phyllis suggests he make Ashley co-CEO. Jack agrees to try it but Phyllis is his priority. 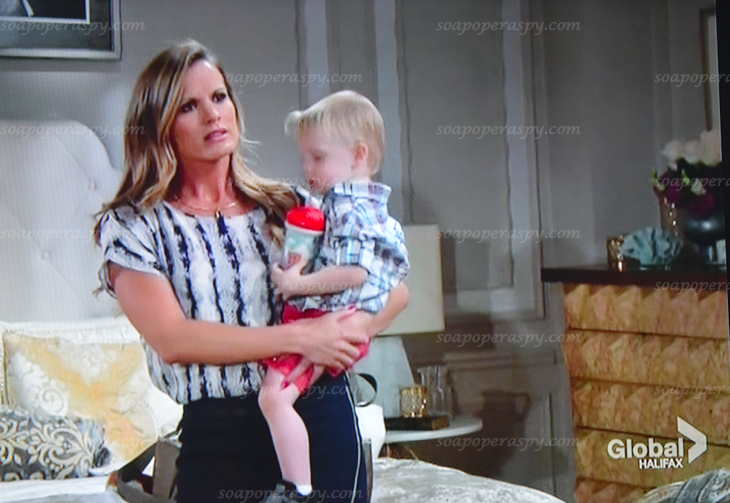 Chelsea is freaking she cannot believe this is happening now. Adam tells him it is her label, it is her and tells her she cannot hand it to Victor.

Nick is doing the checklist for the wedding and Sage tells him she wants a photographer at the wedding. Nick tells her Noah will take them. 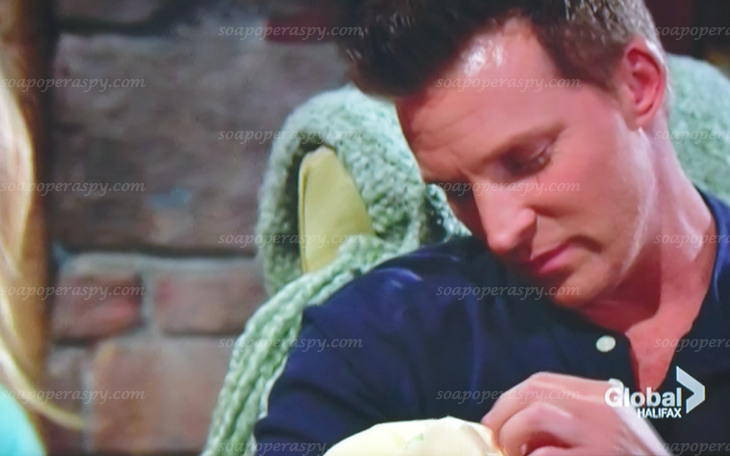 Sharon is sleeping and dreaming of her and Dylan’s baby and baby holding the baby and then the baby is gone and Dylan says, “Where is the baby? What happened to the baby?” Sharon wakes up and Dylan tells her it is just a bad dream.

That is it “The Young and the Restless” fans! Do you think Chelsea is going to head back to Genoa City to fight Victor?  Is this just a ploy by Victor to get Connor back in town?  What do you think of Jack making Ashley Co-CEO?

‘The Young and the Restless’ (Y&R) RUMORS: Did A Jealous Gwen Push Hilary Down The Cliff?

‘The Bold and the Beautiful’ Spoilers: Watch The B&B Video Preview For Wednesday August 26 – SEE IT HERE!