‘The Young and the Restless’ (Y&R) Rumors: Adam Returns To Genoa City To Help Jack Take Victor Down 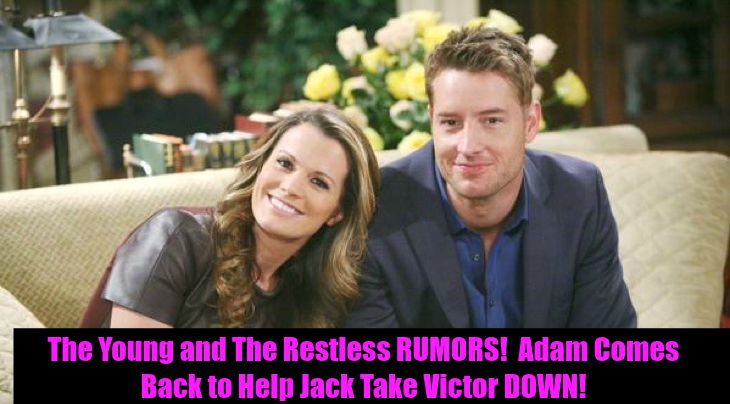 “Young and the Restless” spoilers are in for November sweeps, and they are explosive. Gabriel (Justin Hartley) told his wife, Chelsea (Melissa Claire Egan) his true identity and turned her world upside down, again. At the time of his death, Chelsea couldn’t see past her grief. He was not just her husband, they understood each other. When Connor was born, she thought she finally would have her happy ending. That was until Adam allegedly ran over Delia (Sophia Pollono), Billy Abbott’s (Burgess Jenkins) daughter, and killed her. Fans have debated for two years if Adam really killed Delia. Many fans believe it might have been another driver, but one fact remains: Adam believed he hit her so in his mind he was guilty.

Last week, Adam rocked Chelsea’s world again and told her his true identity. For over a year, she believed he was Gabriel Bingham (Justin Hartley) and couldn’t understand the connection she felt to him. Imagine her shock to learn he was her dead husband. He asked her to give him another chance and live as a family again. She wanted to give in and give him another chance, but how could she after all the deception? She loved him with every fiber of her being, but can she trust him again?

The fall previews teased that Adam and Chelsea want to live life in Paris, but may have to go back to Genoa City. The speculation is that Adam will return to GC to team up with Jack to take down his father, Victor (Eric Braeden).

Adam and Victor have not seen eye to eye in a very long time, if ever. He longed for his father to accept him as his son and treat him as an equal to his half siblings, Nick (Joshua Morrow) and Victoria (Amelia Heinle).

‘The Bold and the Beautiful’ Spoilers: Watch The B&B Video Preview For Thursday August 20 – SEE IT HERE!

‘The Young and the Restless’ (Y&R) Spoilers: Does Neil Kidnaps Hilary After Video Fails To Convince?