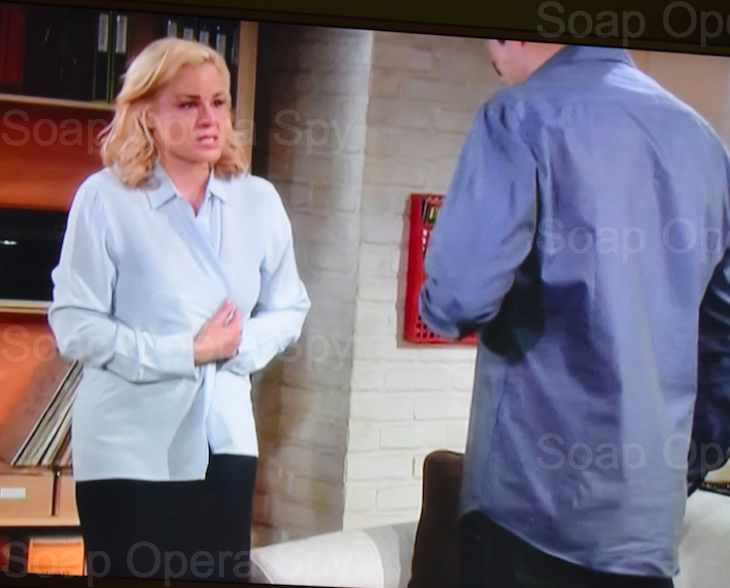 “The Young and the Restless” spoilers for Monday June 8, 2015 reveal that although Joe paints himself as the man who has never stopped loving Avery he was really an abusive husband.  Lauren and Cane shared an illicit kiss and although they thought they could forget about it a loved one saw them kissing.  Paul releases fake information to the press to draw the real killer out. 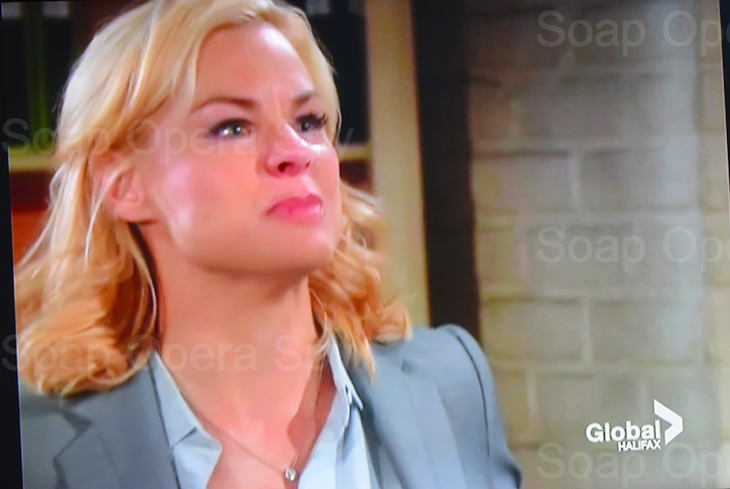 Monday’s episode of Y& R opens with Avery [Jessica Collins] & Joe [Scott Elrod] still fighting. Joe tells Avery she has to make love to him. Avery is pissed. Joe is delusional he wants a chance. Nothing says I love you like blackmail right?? 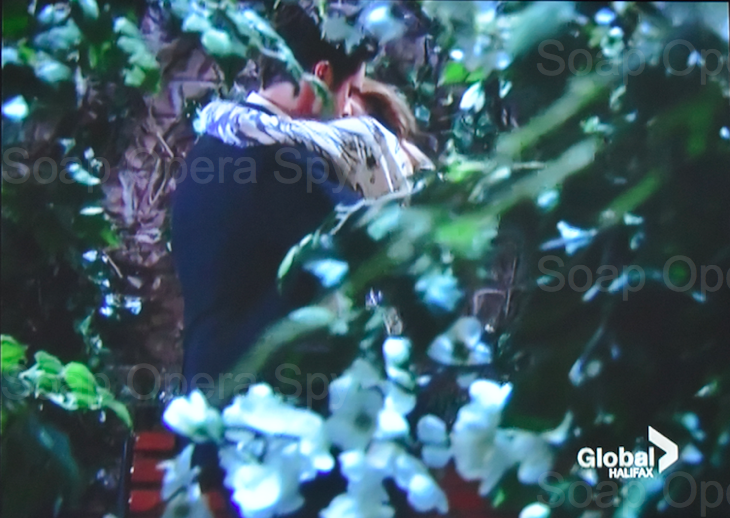 Lily [Cristal Khalil] is calling Cane [Daniel Goddard] again she wants to apologize – says she knows nothing is going on with him and Lauren [Tracy E. Bregman] Meanwhile Lauren and Cane are kissing each other’s faces off.

Over at the Police Station the FBI is going to help them find out who posted the message to GC Buzz. Paul [Doug Davidson] thinks the message is a hoax. 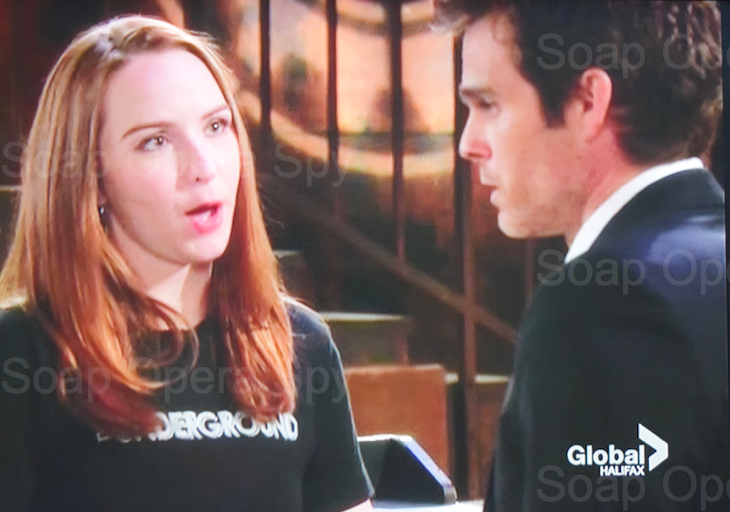 Mariah [Camryn Grimes] is freaking out about sending the message. Stitch [Sean Carrigan] is pissed that Kevin [Gregg Rikaart] wants to do the documentary. He says no way Abby [Melissa Ordway] is doing it. The Scooby Gang starts bickering with each other….

Paul says Kevin would have been able to find the source of the posting on GC buzz. Harding [Chris McKenna] says he is probably already doing it. Harding tells Paul that the kids were contacted to do interviews and they said no.

Harding is complaining they have NO leads on the killers and Paul responds, “Why is that? How does the killer stay one step ahead of us?”

The gang wants Kevin to hack and find out who left the message on GC Buzz he refuses. Kevin tells them he is suspended. Everyone leaves and Mariah asks Kevin if he is going to help her cover her tracks. He says NO he cannot do that!

Cane and Lauren are agreeing what they did (the kiss) should not have happened and it is not going to happen again. 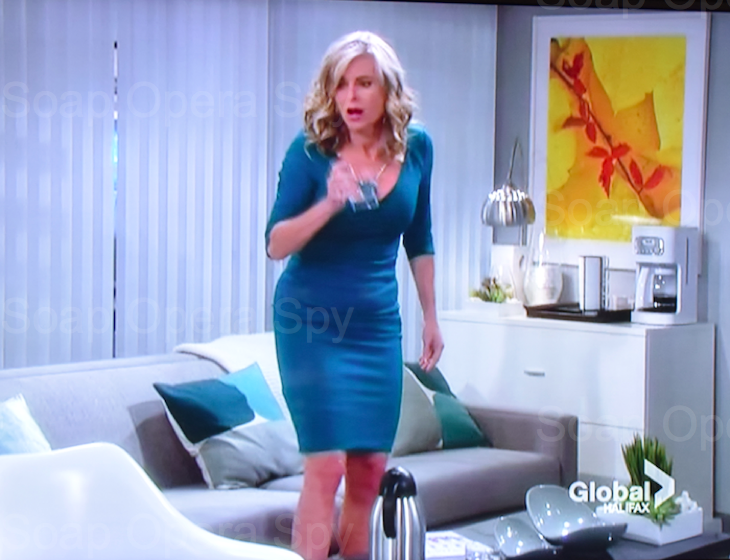 Michael [Christian Le Blanc] comes to see Ashley [Eileen Davidson] at the office she has questions about her will – she wants to revise her estate and revise her will. Michael tells her to call his assistant. Michael leaves and she takes another pill.

Abby & Stitch get to the office Abby is worried Kevin is holding back. Ashley is surprised that the killer is still loose. Ashley looks at the message on GC buzz she is pissed no one told her. All of a sudden something happens to Ashley she is not talking properly Abby Screams, “Mom are you okay?”

Michael is at Crimsons Lights and he looks upset – he has a memory of watching Cane and Lauren in the park kissing. (Oh NO HE SAW THEM) Lauren walks in and says, “Michael?” 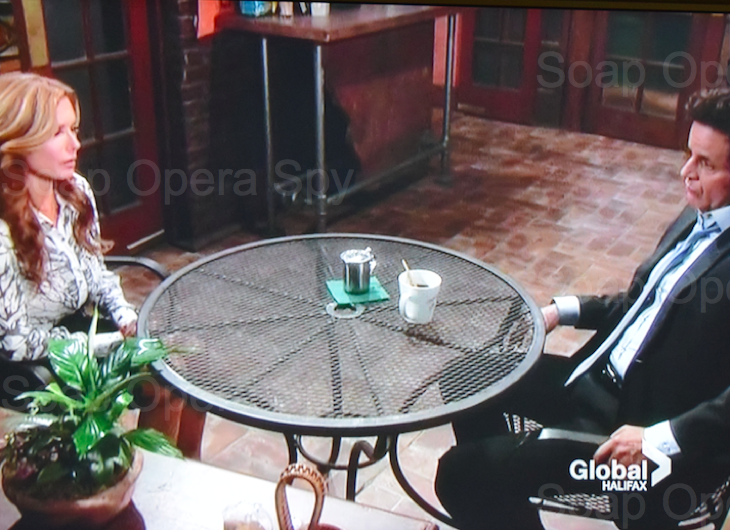 Michael tells Lauren he was thinking about her and hopes she signed the divorce papers. Lauren says she is NOT signing them she will contest the divorce, she is not running. Michael says, “Maybe we should take a look at what you HAVE done!” She says she has no idea what he is talking about and he responds, “DON’T YOU??”

Cane comes into the Athletic Club and he looks upset. Lily wants to know if he got her messages – she tells him she wants to apologize and she is embarrassed. She tells him she loves him and trusts him. 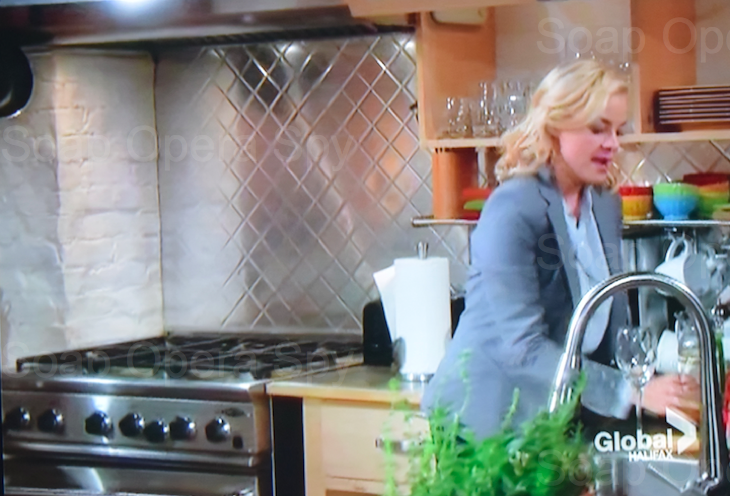 Joe wants one night to prove to Avery how they love each other. Joe thinks if they have SEX all the reasons they belong together will come back to her. Avery says, “OKAY JOE LETS MAKE LOVE.” 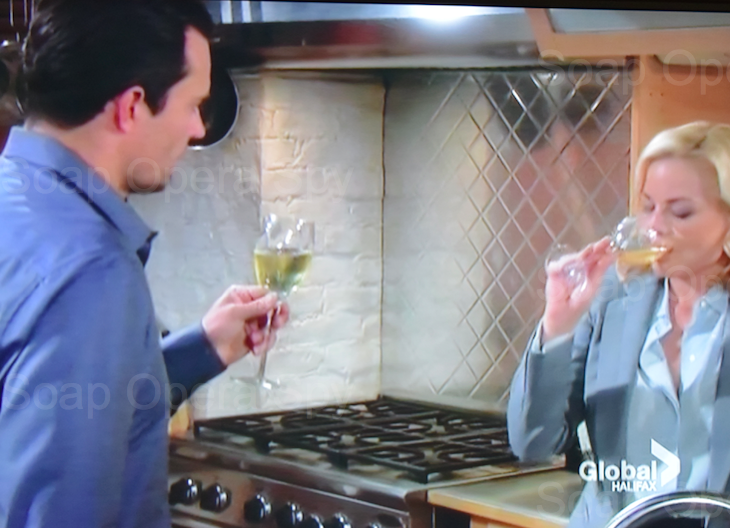 Joe asks Avery if she is sure and she says, “Absolutely, ONE NIGHT OF SEX COMING UP!! Oh wait it is suppose to be making love, not sex.” Avery starts mocking him… Avery jugs a full glass of wine, she is hysterical she takes another glass and chugs it and says, “To a night neither one of us will forget!”

Abby wants to know if she is okay she is talking funny. Ashley claims migraines. Stitch says he has to go. Ashley says it is stress from the merger. 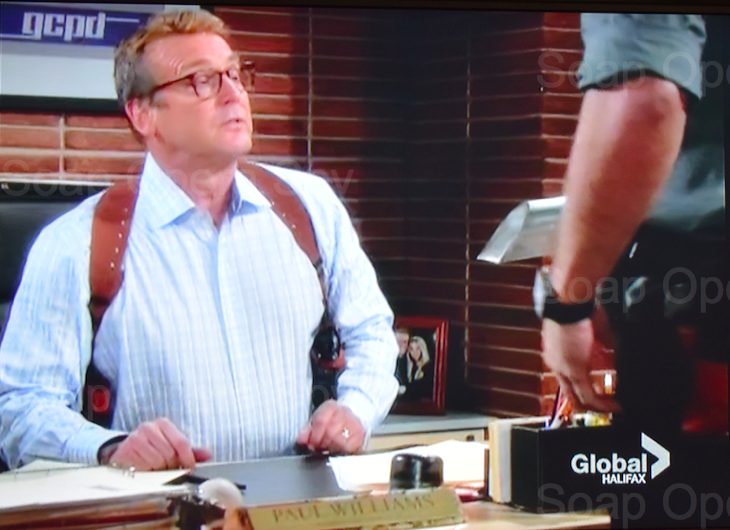 Paul tells Harding come with him he has lead on the, “Catch me if you can message.” Meanwhile Mariah cannot believe Kevin will not help her. Kevin tells her it is too late. Kevin tells her to come clean. Mariah says she cannot confess she wants to run.

Kevin tells Mariah if they run the police and Feds would be looking for them. Mariah says she cannot afford to be in trouble again. Harding walks in and says, “Mariah Copeland you are under arrest.”

Abby gushes about how perfect Stitch is for her to Ashley. Ashley tells her she can handle it.

Stitch meets the doctor at the hospital and asks about the migraine medicine he prescribed for Ashley. Stitch tells the doctor her symptoms say he should test more. The doctor tells him off and tells him it is none of his business. 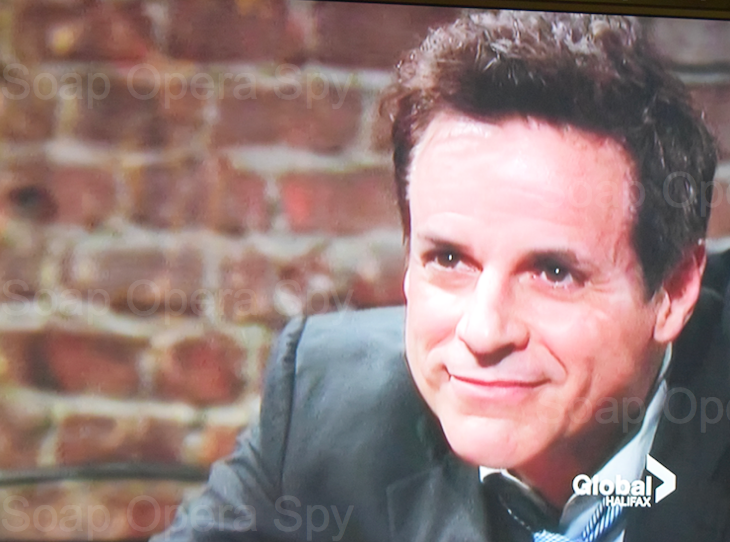 Lauren is confused what Michael thinks she has done. She keeps saying she loves him Michael tells her “I SAW YOU KISSING CANE” !

Ashley gets a call from the doctor and he tells her Stitch was asking questions about her. The doctor wants her in to do more tests. Ashley comes out and is furious at Stitch. 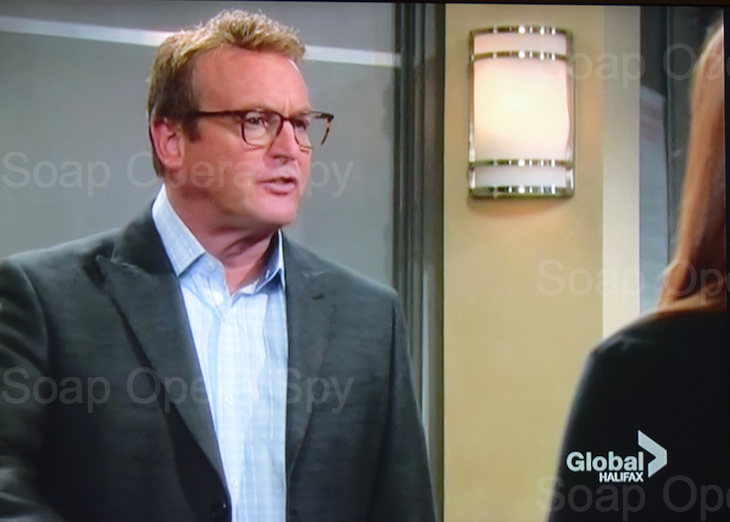 Paul asks Mariah what she was thinking. He tells Kevin and Mariah thanks to them their plan to draw the killer out has failed. Harding goes to handcuff Mariah and Paul says wait come speak to me Harding.

Paul tells Harding if they play it right the killer might walk into their trap. Paul comes out and tells Mariah and Kevin they are both free to go BUT they must stay out of the case. If they do mess around in it the charges will come back. 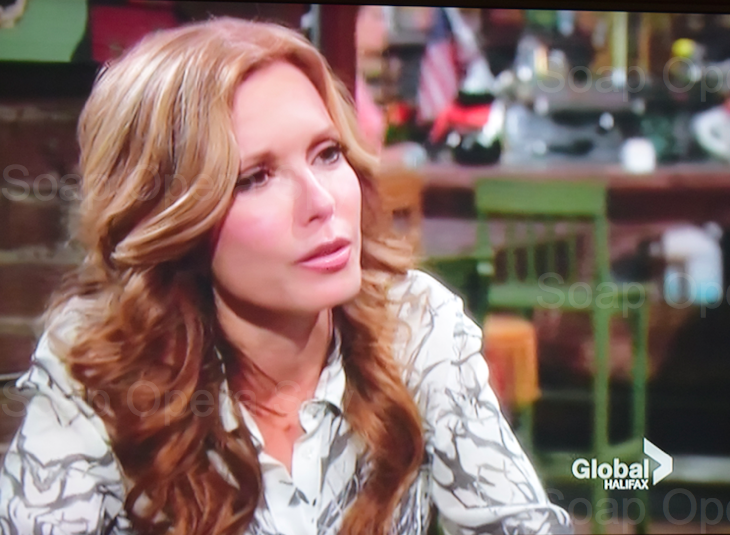 Lauren tries to explain to Michael. Lauren tells Michael he did this – he took it all from her, the holding of her hand, the stroking of her hair, his footsteps. He made her all about what happens in bed. She sobs, “I kissed Cane because I am human and I am dying of loneliness.” She gets up and he screams, “DIVORCE ME!” 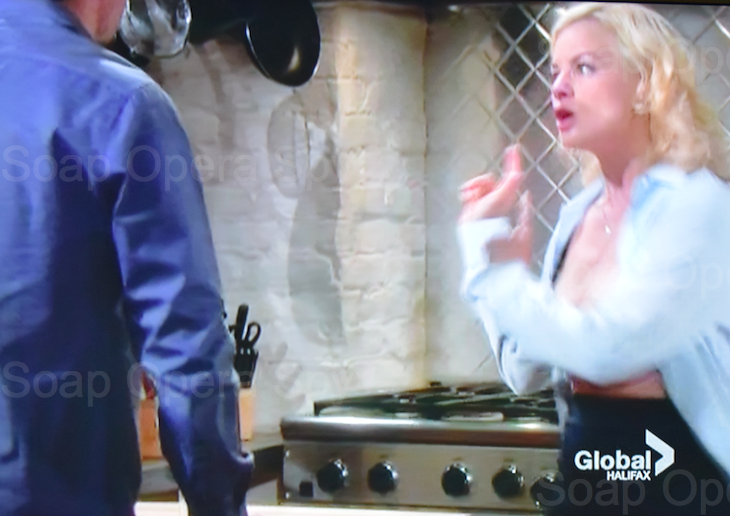 Avery is still going nuts; she starts ripping her clothes off and asks Joe if he is enjoying it. He grabs her she starts having memories of him hitting her. He says he wants her to want him. She backs off and screams, “GET OUT NOW!!” Joe leaves and his parting words are, “I may have made a mistake Avery, but I was not the only one!” She breaks down and cries!

Lauren comes in to the bar where Cane is – Cane does not want to talk to her but she tells him Michael saw them kiss. Cane is going to tells Lily before Michael does. 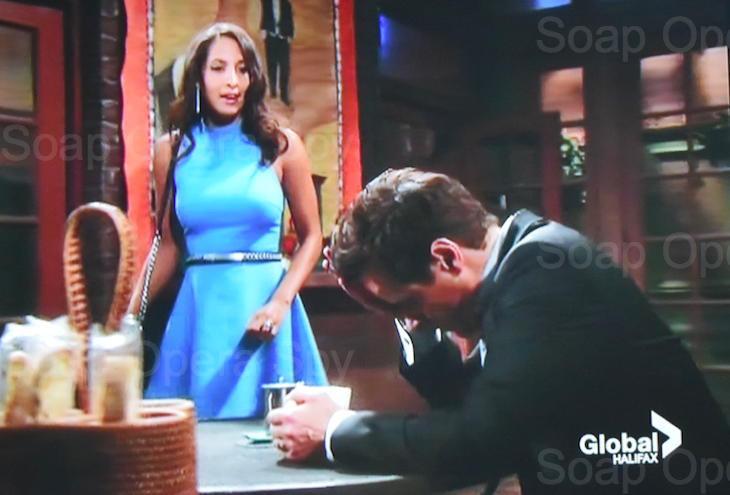 Meanwhile BIG SURPRISE, guess who walks into Crimson Lights where Michael is sitting? Yep, Lily… She sits down with Michael – she tells him he should reconsider the divorce with Lauren. Michael tells her it is none of her business just like her problems with Cane are none of his business. Lily is surprised and says, “What problems with Cane.” Michael leaves…

Kevin wants to know if Mariah would have left without him. She tells him she would have missed him. Mariah and Kevin get a text message, “Paul is holding a press conference.” 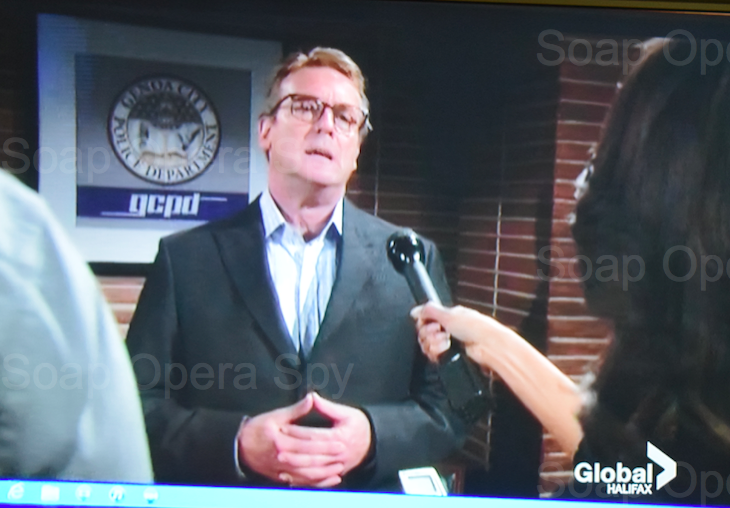 At the press conference – Paul announces that the murder case is reopened and Tobias Grey [Jeffrey Christopher] is considered a third victim and the killer is adept at framing other people BUT they have recovered a tablet belonging to Austin Travers [Mathew Atkinson] where he recorded backups of all his computer files and the tablet is at an undisclosed location being analyzed.

Kevin realizes Paul is using the power of the press because he knows there is no Tablet; Paul is lying and trying to draw the killer out. 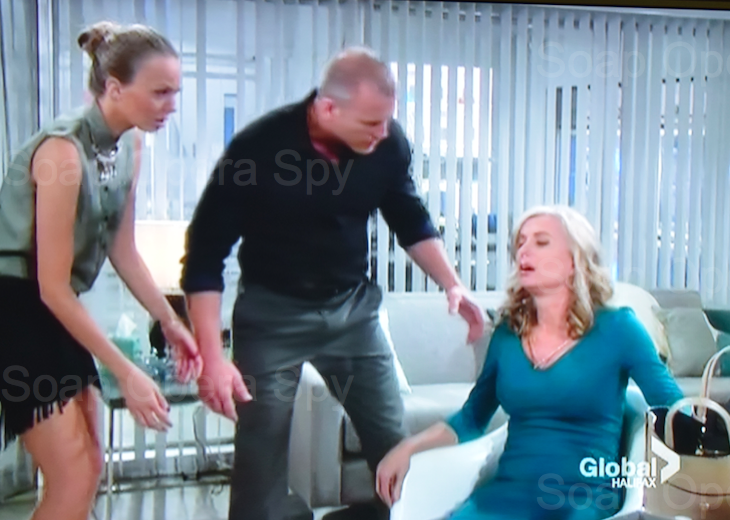 Abby is bashing Ashley, asking why she was screaming at Stitch – Stitch tells her to stop and Ashley falls into the chair, eyes open and not saying anything, she is having a seizure. Stitch says, “Ashley!!”