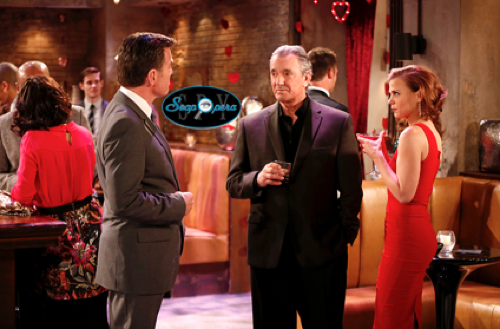 CBS’s The Young and the Restless is must see TV for Friday February 13th, 2015. Spoilers have shown a massive catastrophe hitting Genoa City residents, their lives will be changed forever! It’ is Valentines day and the residents of Genoa City are not feeling the love, there is disaster in the air.

The weather in Genoa City is suppose to be atrocious on this Valentines Day but that does not stop the residents of the town from making plans. Nick [Joshua Morrow] gave Sage [Kelly Sullivan] a job at The Underground since Austin [Mathew Atkinson] quit. Austin who is married to Nick’s daughter Summer has been harbouring a lot of resentment for quite awhile and it finally came to a head. When Nick reprimanded Austin for not giving him important messages from the building inspector about The Underground being a structural hazard, Austin had it, quit and stomped off.

Jill [Jess Walton], Colin [Tristan Rogers], Cane [Daniel Goddard], Lily [Christel Khalil], Neil [Kristoff St John], and Devon [Bryton James] are on the private jet on their way to finalize and celebrate the Chancellor Industries deal. Neil is still pretending he cannot see and no one is the wiser.

Chelsea [Melissa Claire Egan] is spending Valentines with Billy [Burgess Jenkins] and Conner at the condo.

Niki [Melody Thomas],Victor [Eric Braeden],Phyllis [Gina Tognoni ], Avery [Jessica Collins] and Dylan [Steve Burton] are heading to the Underground for the big Valentine’s Day bash being held there. Jack Abbott [Peter Bergman] shows up unexpectantly to tries to woo Phyllis, she is not happy to see him and tells him to leave, he won’t leave, it’s Valentines Day and he loves his Red [Phyllis]! Mr. Tall, dark and handsome Joe Clark [Scott Elrod] also shows up uninvited and sees his ex-wife Avery. It seems that Avery is warming up to him, the hostility she once had is not there..is Avery falling back in love with Joe?  What does that mean for Dylan?

Mariah and Summer get an anonymous invite to a mystery Valentine party at the Abbott Cabin, they have no idea who is throwing it but the curiosity is killing them. Summer and Mariah set their differences aside to go to the party, they bring Kevin and Austin.

When the two couples get to the cabin they find out it’s Fenmore and Kyle Abbott throwing the party. Austin and Kevin are not thrilled about this. This causes friction with Austin and Summer’s already bumpy relationship.

Meanwhile on the jet the turbulence is becoming really bad and it’s a white out, Jill, Colin, Lily, Neil and Devon start fastening their seat belts, Cane is standing in the aisle as the jet starts jolting. Cane gets thrown to the ground. The jet seems to be going down May Day! May Day! Panic hits, they all realize they are going down!!!!

Back at The Underground Nick and Sage are in the stock room grabbing more Champagne for the guests, all of a sudden there is a loud sonic boom noise ripping through the roof , Nick jumps on top of Sage to protect her from the rubble falling from the roof, all the guests are screaming with fear, the lights go out and the whole roof collapses! People are buried alive!  Does this have to do with the structural damage the inspector was concerned with?

Will Neil ,Lily, Devon, Jill, Colin, or Cane survive the fiery crash? Which guests at The Underground will get out alive? Please share your thoughts in the Soap Opera Spy comments below.

Abi Ong has a degree in Communication Arts and has worked as a writer and producer for TV. As a freelance writer, Abi enjoys writing about celebrity and entertainment news. In her spare time, she loves cooking, baking, and playing with her three rescued cats.