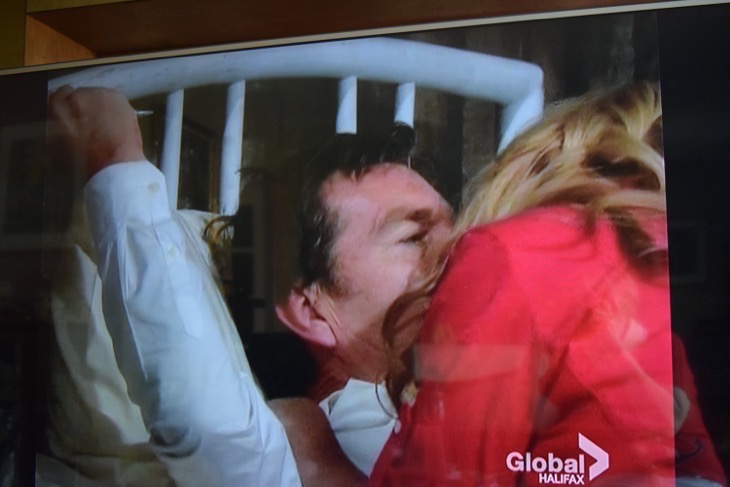 “The Young and the Restless” spoilers for May 5, 2015 reveal that Kelly has fallen deeper down the bunny hole and actually believes that Jack loves her.  Meanwhile, when Jack realizes the degree of her insanity he plays along and gets to deliver a life threatening blow.  The residents of Genoa City are celebrating the re-openning of the Underground and one attendee will shock everyone who is at the party.  A car accident will have long lasting effects for many of the GC residents 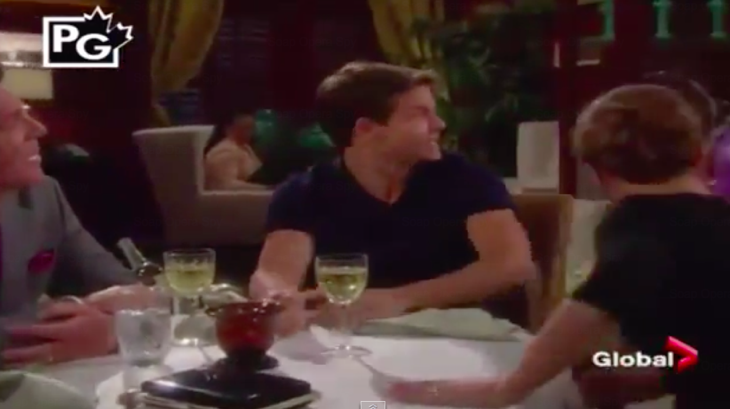 Tuesday May 5th, 2015 episode of Y&R opens with Kyle [Lachlan Buchanan] sitting at the Club with Flack and Phyllis recounting a story of driving the Ferrari with Flack [Peter Bergman] Phyllis. Summer [Hunter King] walks in and Phyllis [Gina Tognoni] asks her to come over and sit with them, she refuses.

Phyllis is surprised but Kyle tells Phyllis Summer has been acting like this for a while and tells them about their disasterous date.

Kelly [Cady McClain] is back and Real Jack is upset it has been two days since she has been there. She offers him water if he apologizes. He does and she gives it to him she demands a thank you.

Sharon [Sharon Case] offers Michael [Christian LeBlanc] food he looks worn out and she wants him to take a break. Sharon tries to distract him – she asks Michael to take Lauren [Tracy E. Bregman] to The Underground that is opening that night.

Noah [Robert Adamson] comes over, he has news about Sharon’s case

Phyllis is not thrilled going to The Underground reopening. Flack tells her to have a few drinks and she will feel better. Flack then says, “Anyway it was not that bad!” Phyllis is shocked and asks if he forgot what it was like to be buried under the rubble. He does not answer, looks up and Victor [Eric Braeden] is there.

Noah tells Summer Paul [Doug Davidson] is close to dropping the charges against her because Kevin found out something else. When they tell Sharon about the photo she gets upset but Noah tells her the photo was doctored so she has nothing to worry about.

Sharon is excited and thinks she could be cleared before she goes to trial but Michael tells her to calm herself it is not a done deal, Paul is only looking at evidence. 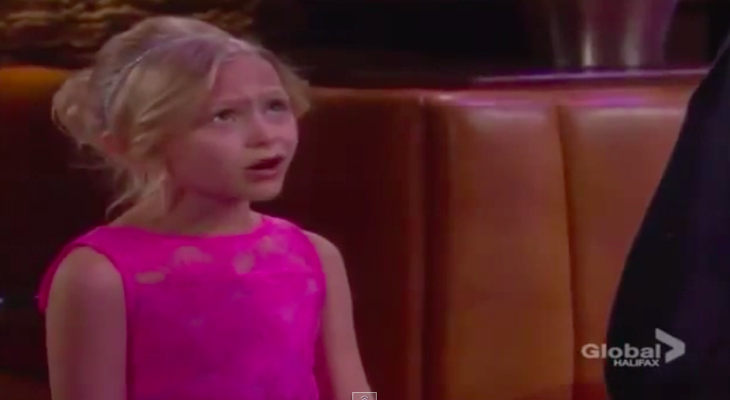 Faith asks why, “SHE is there?” Meaning Sage. Nick tells Faith it is not nice to be rude. Nick makes her apologize. Faith asks if she can leave and turns down a milk shake. Faith asks Sage why she is there and says to Nick, “I thought you were not going to see her anymore.” Nick tells her Sage is an employee now like Mariah [Camryn Grimes] Sage does not look happy.

Abby and Stitch are going back and forth Stitch tells her he cares she says that is a pity declaration. She says I am a slut!

Kelly has a plate of grapes and tells Real Jack it is yummy she tells him if he asks please she will give him one. He says please and she puts a grape in his mouth he spits it out and tells Kelly she won’t break him.

Kelly is upset and she professes her love for him he tells her she is demented. Then she tells him she is leaving him alone with no food, no water. Jack apologizes. 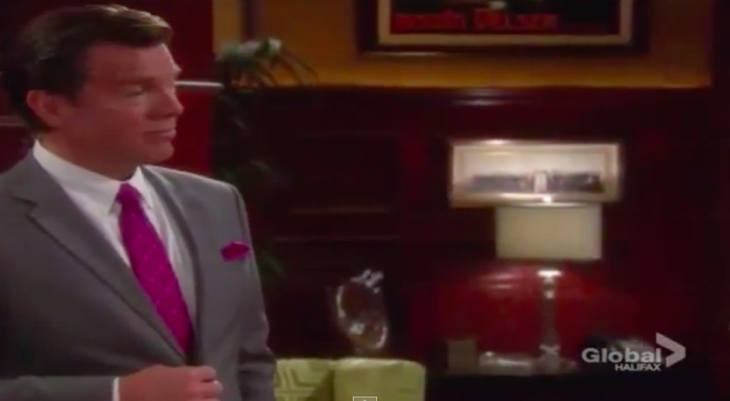 Victor sits down and asks Flack why he isn’t at work. Flack says, “All work and no play.” Victor responds, “YOU GET BACK TO THE OFFICE, YOU ACT LIKE JACK ABBOTT, YOU GOT THAT!!!!” Flack says carelessly, “Don’t worry Vic I got this handled.” Victor interrupts, “You arrogant Jackass you do not undo what I have worked so hard to build up. You start doing exactly what I tell you to do.” Kyle overhears and says to Victor, “Where do you get off talking to my Dad like that Victor?”

Flack makes an excuse and says he and Victor are working through the kinks. Kyle is not buying it and is still upset. 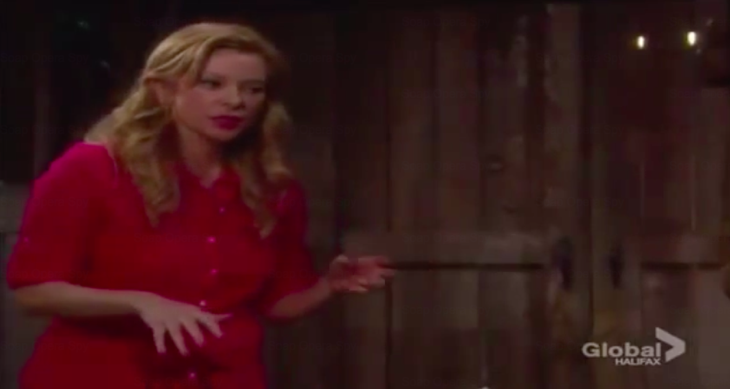 Real Jack agrees to do whatever Kelly wants, he just does not want her to go. Kelly thinks and then tells Jack she wants him to write her a love letter she needs to know he loves her. 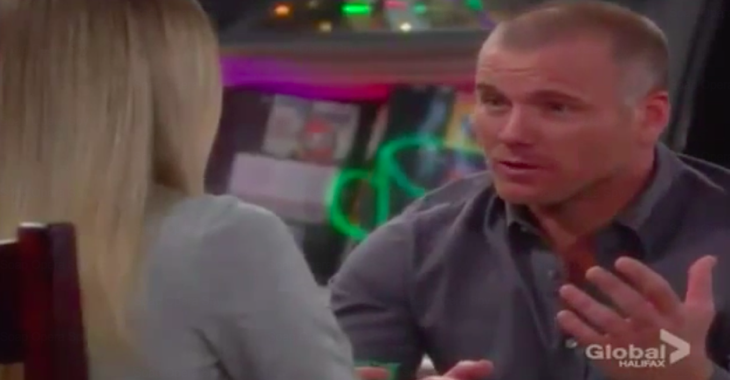 Stitch tells Abby all the reasons he is not a saint. Abby starts listing his great qualities. They finally agree after much talking she is a slut and he is a man whore.

Faith is having her milkshake and watching Sage she really does not like her. Nick comes to to talk to her, Mariah interrupts she can see Faith is miserable and offers to take Faith to her car.

Kevin asks Nick if he has heard the latest news about Sharon.

Noah tells Sharon and Michael that the police computer system and Austin’s [Mathew Atkinson] laptop was stolen – Sharon is thrilled she was under house arrest and clearly she could not have stolen the laptop. 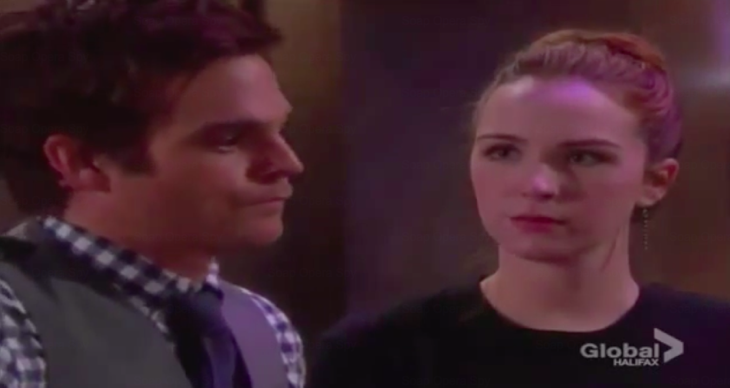 Kevin [Gregg Rikaart] tells Nick that Paul is thinking of dropped the charges against Sharon. Nick is surprised and Mariah walks up and tells Nick not to sound so surprised because people might think he is disappointed

Mariah keeps going on at Nick about how he and his father would prefer Sharon was locked up. Then they could pretend Faith came from fairy dust and not Sharon.

Real Jack tells Kelly he is done with her love letter and he wrote from his heart.  Kelly starts reading and she is so excited while she reads it he hides the pen. Kelly tells him it is the most beautiful thing she has ever heard. Jack tells her he really is in love – she comes over and kisses him and he lifts the pen stabs her in the neck she backs away holds her neck, she is bleeding

Kelly cries, “You liar, you lied.” Jack says I told you I was in love with Phyllis and you are insane to think it was you. Kelly laughs hysterically, “You screwed us both, I am the only one who knows where you are. You kill me you kill us both.” Jack looks worried.

Victor tries to reassure Kyle and tells him he knows he has to show Flack respect. Victor assures Kyle he will treat his Dad with respect he apologizes and Flack accepts his apology.

Victor leaves and Kyle is shocked he says Victor Neman apologizes to now one. Flack tells him Victor has changed. Flack asks him to sit down and tell him about Summer. Flack tells him if Summer does not appreciate him there are other women who will be interested in what he has to offer. Flack offers to let Kyle drive his Ferrari again.

Stitch tells Abby he thinks they can have something good – They are going to tell people they are a couple at the Underground reopening party.

Phyllis asks Summer to come to the Underground reopening. Summer does not really want to go because it is going to be weird with Kyle. Phyllis bribes her with a new dress.

Jack tells Kelly to hang on and give him the keys to the handcuffs, she refuses. Blood is pouring down her neck. She passes out Jack tries to reach for her purse which is on the bed.

Sharon is thrilled because she feels good things are happening for their family. Sharon wants to go to the Underground reopening but since she can’t she sends her best wishes for the reopening with Noah.

Noah Leaves and Michael tells Sharon he left a message for Paul. She tells Michael to take a break he looks tired. He agrees and starts to fall asleep. Sharon comes back sees Michael sleeping and she is thinking and you just know Sharon is going to leave.

Sage tells Nick he must be thrilled about Sharon. He says ya…. Sage tells him it is best they stay away from each other – he has to put Faith first. Nick asks her to wait for him. She agrees.

Jack finally got Kelly’s purse… emptied it there are no keys inside but there is a cell phone…he opens it up.

Kyle is driving Flack’s Ferrari with Flack in the passenger seat he tells Flack he is a perfect Dad. Flack tells Kyle they should get Kyle a Ferrari of his own. Kyle is thrilled.

They are opening the Underground – Noah is the first customer – Mariah comes in and sees Abby and Stitch walk in Mariah starts on her about Abby being the town slut and everyone should hold on to their men. Nick tells then NO fighting and Victor walks in and says yep no fighting it is a celebration.

Michael wakes up and big surprise Sharon is gone!

Phyllis walks into The Underground and tells Nick Jack is on his way with Kyle.

All of a sudden Sharon walks into The Underground dressed to the nines and Nick says, “WHAT IS SHE DOING HERE????” Sharon is smiling clueless and everyone looks at her surprised. 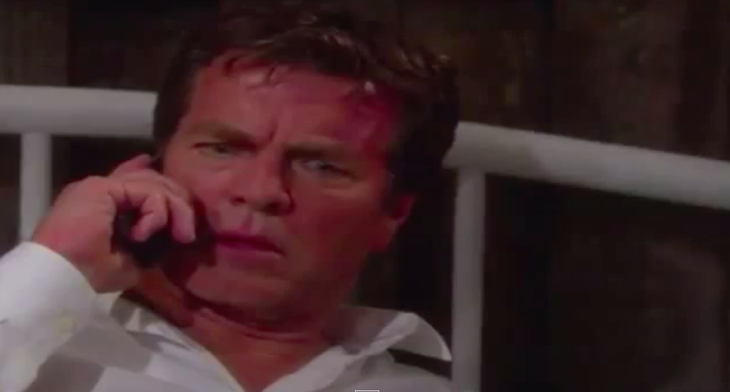 Real Jack asks Flack where is his son. Kyle says, “Who is it Dad” and Jack says, “Is that Kyle?” Flack says, “Answer my question first!” Kyle says, “Dad who are you talking too???” Jack says, “THIS IS JACK ABBOT WHO THE HELL IS THIS????”

Kyle says, “Dad who is it??” All of a sudden we hear horns and the squealing of brakes and Flack pulls the wheel. Jack is listening and hears a crash and Jack screams, “KYLE, KYLE??”

That is it SOSers!  What an action packed episode.  Do you think that Flack will be hurt in the accident and will the medical staff realize that Flack is a fake?  Did Kyle overhear Jack talking on the phone?  What is going to happen to Sharon now that she has violated her patrol.

The Young and the Restless Spoilers Week Of May 4: Madness, Mayhem and Disappointment

‘The Young and the Restless’ News: Frank Runyeon To Appear on YR As An Angel