‘The Young and the Restless’ Spoilers May 11: Chelsea and Gabriel Made Love, Neil Punched Billy, Nikki Threatens To Drink, Gwen and Neil Kiss 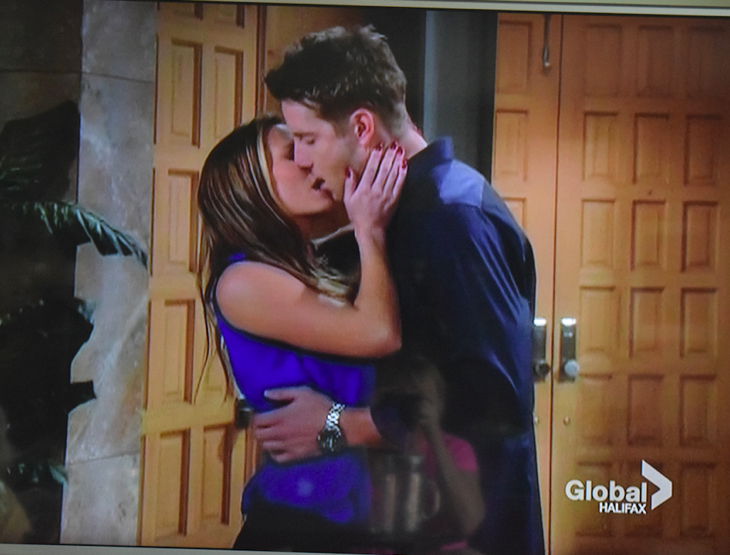 “The Young and the Restless” spoilers for May 11, 2015 reveal that while two couples move ahead in their relationships a new romance begins.  Billy continues to try to find proof that the signature on the merger contract is forged.  Nikki almost falls back in the bottle because she knows that signing the merger document for Victor was wrong.

Monday May 11 episode opens with Chelsea [Melissa Claire Egan] behind her there is a hand going up and down her body – she turns around, there is a naked man it is Gabriel [Justin Hartley] and they are kissing. She wakes up, it was a dream!

Billy [Burgess Jenkins] tells Victoria [Amelia Heinle] and Victor [Eric Braeden] the signature on the contract is a forgery. Victor assures him it is Jack’s [Peter Bergman] signature and Victor does not give a damn what they think. Billy asks Victoria if she is letting him get away with it?

Nikki [Melody Thomas Scott] is at the bar and asks for a club soda – she is thinking of signing the contract, as a witness-she knows it was not right. 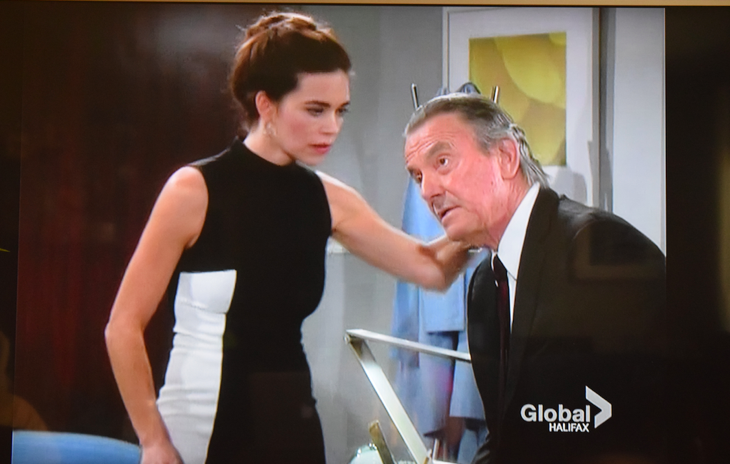 Victoria does not buy that it is not Jack’s signature and Victor says Ashley and Jack are just trying to take Jack’s company while he is in the coma. Victor tells Billy he is an embarrassment. He tears a strip off Billy and starts to get agitated. Victoria tells him to calm down!

Victoria says no one should fight and Billy blames Victor. Ashley [Eileen Davidson] looks at the document… Billy says he is having the signature analyzed by an expert.

Billy and Ashley leave and Victoria says, “Dad please tells me that signature is not a forgery?”

Billy tells Ashley he almost put his fist through Victor’s face. Ashley tells him even if they get a handwriting expert they won’t be able to tell, Victor is too good. Ashley suggests they go ask Nikki if she witnessed Jack signing. 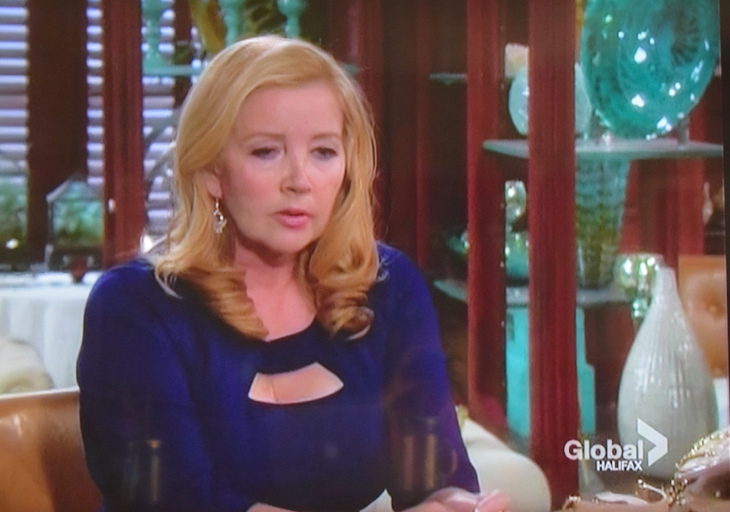 Nikki is still at the bar, she asks for another club soda and then says, “actually make that a VODKA!”

Gwen [Liza Huber] invites Neil [Kristoff St.John] to lunch Neil gets a text and it is Nikki she texts, “I lied, I need help!” 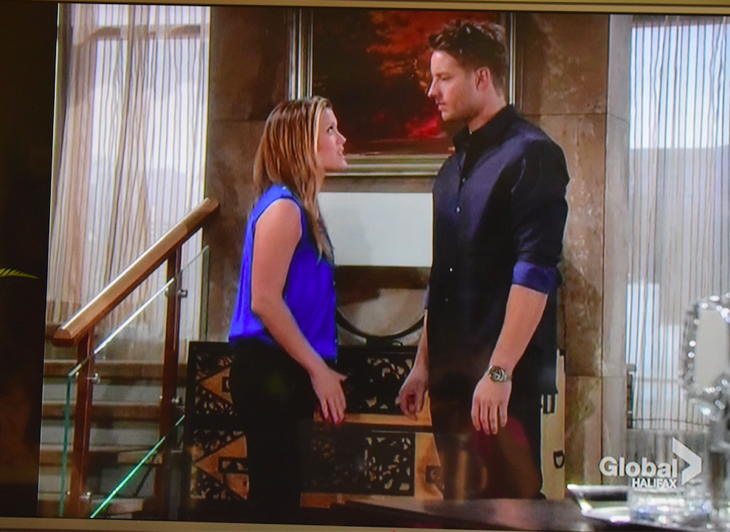 Victoria tells Victor it is a simple question is the signature real. Victor tells Victoria to ask Jack when he wakes up. Victor gets a text message – nothing has changed with Flack. Victor says he really cares about Flack and is worried about him.

Hilary and Devon are still in bed – Devon wants to tell Neil he cannot keep things from him anymore. Ashley sends Hilary an urgent message she needs to see her. Devon assures her Neil will come around. Ashley says she has to leave. 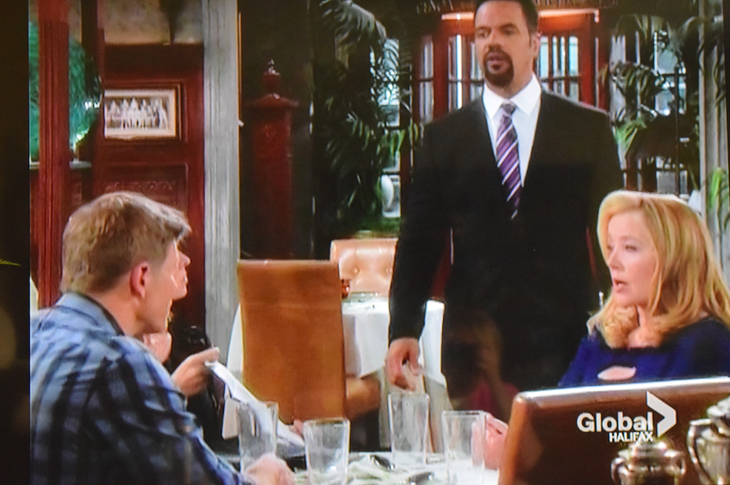 Ashley tells Nikki that Jack is no better, but Victor did tell them Jack signed the contract. Ashley asks Nikki when she saw Jack signed the document. Nikki is hesitant… Billy asks, “DID Jack sign the paper.” Neil walks in and tells them to step off. Billy says, “Geez, don’t tell me you sold out too Neil?”

Neil tells him he is going to be easy on him but Nikki and he did witness the contract being signed. Billy asks Neil, “How did it go down, did he offer you the corner office, what did he offer to make you lie about the signature.” He looks at Nikki and says, “But you, you know full well Jack would never partner up with Victor.”

Billy then says to Nikki, “Did Victor corrupt you so much you would hurt the man you once loved!” Billy can’t stop and turns around to Neil and says, “Neil you don’t know anything, you didn’t even know when you wife was cheating on you with your son!” Neil HITS HIM! 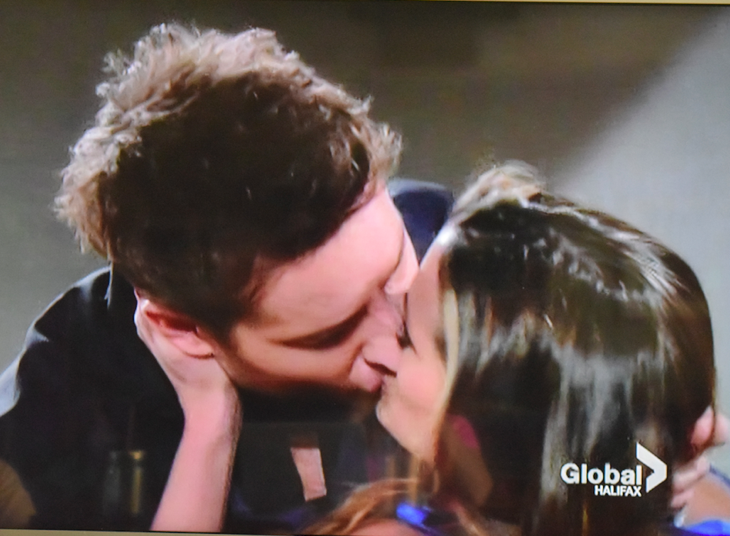 Chelsea tells Gabriel he is deluding himself if he thinks what they had was anything more than sex. Gabriel argues that it was. Chelsea says, “nope I was trying to get even with Billy because of Victoria.” Gabriel responds, “You came to me because you wanted me!” Chelsea says, “You mean nothing to me.” Gabriel says prove it and he leans in and kisses her… The kiss goes on and then Chelsea pulls away. Gabriel says, “Tell me that did not mean anything!”

Neil and Billy are fighting and Devon runs in and breaks them up. Neil tells Billy he needs to learn to accept the truth. Billy’s lip is bleeding. Billy shows the documents to Hilary and asks if she saw Jack sign the papers. Hilary says, “NO!”

Neil assures them Jack signed the papers and tells Billy how can they believe Hilary she is in the business of hurting people. Neil tells Ashley, “Maybe you do not know your brother as well as you think you do.” Nikki screams and tells everyone to STOP – when Jack wakes up he will tell people it is his signature.

Billy tells them all, “We have an appt with our lawyer and when the handwriting expert proves this signature is a fake you have a lot to answer to. SEE YOU IN COURT!!”

Victor walks into the Athletic Club and Billy tells Victor it is not going to work forcing Nikki to lie for him. 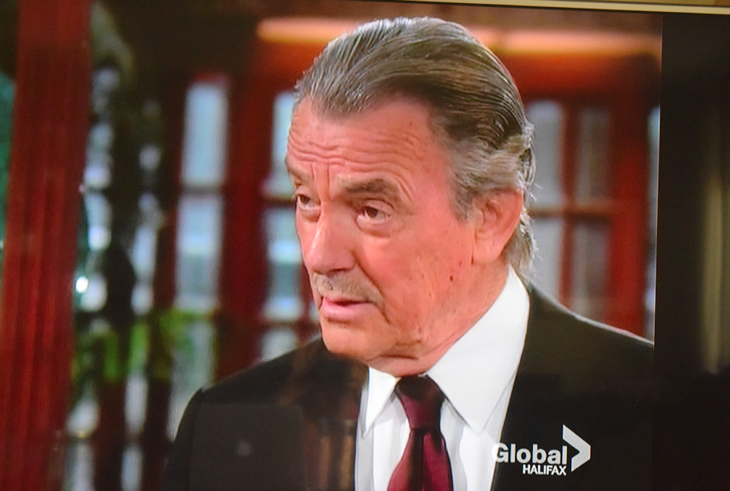 Victor comes over to Nikki and asks Nikki if everything is alright and she replies, “Jack did not sign that contract did he?”

Neil goes to Devon and Hilary and he asks what is up with them. This is the second time he has seen them together. Devon tells him, “Hilary and I are back together!”

Chelsea asks Gabriel, “How arrogant are you, you think no woman can resist you?” Gabriel says, “You are right I am a jerk but my ego tells me you have feelings for me!” Gabriel tells her his closest friend is in a coma and it makes you realize you have to seize the day. What they have is so much more than revenge sex. They have a connection.

Gabriel asks her to tell him she does not want him and to ask him to leave and he will leave. Chelsea looks at him walks over and kisses him. They start to undress…

Neil says he does not believe a single word coming out of either of their mouths, they are both liars. Neil tells Devon he should run for his life. Neil wishes for both of them a lot of pain and a lot of heartbreak. He ends it by saying, “Karma is a bitch!”

Ashley and Billy are at Jabot and Victoria asks who Billy got in a fight with this time. Billy says, “Neil, Victor has taken him over to the dark side.” Ashley says, “Jack’s assistant did not see the signature.” Victoria says it does not mean anything and Billy asks Victoria if she can live with knowing what Victor is doing to Jack. She turns around and says she is going for a medical kit. 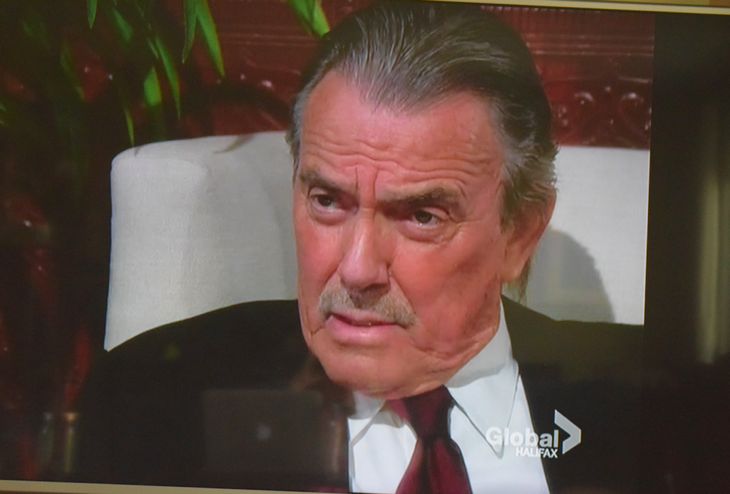 Nikki asks Victor if he is going to answer her question. Nikki tells Victor, “It is a lie Victor I did not see Jack sign the document.” Nikki tells him that Billy and Ashley won’t give up” Victor says he wants Nikki on his side. Nikki says, “then tell me the truth or I will go over to that bar and drink every drop of alcohol there is.” Victor asks if she is serious and she says she is dead serious. Victor looks at Nikki shocked!!

Hilary tells Devon it is not to late to call everything off. Devon does not want it to end and knows telling Neil was the right thing to do. They Hug!

Gwen comes into Neil’s office and says he looks rough – Neil tells her Devon and Hilary are back together. He is surprised they expected him to accept it and move on. Gwen tells him he is human and asks if it felt good when he hit Devon. Neil says, “I did not hit Devon.” Gwen tells him she is sorry he does not deserve to be hurt. They start kissing

Victor asks if Nikki would sacrifice her sobriety just to hurt him. Nikki responds, “Would you let me?” Victor tells Nikki, “If you don’t want to sign for me, sign for the family.” Nikki demands the truth. Victor says, “Alright JACK ABBOTT DID SIGN THAT CONTRACT!!”

Victoria is playing Nurse to Billy…. Victoria tells him she is worried about him he has had to deal with so much. Billy tells her she does not have to worry about him. He says he is Billy 2.0 the new Billy. It is time for him to step up and replay all the things Jack has done for him.

Back with naked Gabriel and Chelsea says, “Well that was surprising! Especially the moment you called out Adam’s name.” Chelsea says, “OMG, that is not okay, you should go, get dressed this should not have happened.” Gabriel tells her it is okay she loved Adam. Chelsea says, “Yes, I fear Adam is the only man I will ever love!” Gabriel says, “it is not like you are cheating on him.” Chelsea says, “It feels like I am please go.” He leaves. Chelsea goes to the door after him and stops.

That is it SOSers!  Chelsea and Gabriel made love again, but once again Chelsea thru Gabriel out.  Why did Gabriel tells Cheslea she called Adam’s name when they were making love?  He had to know it would upset her.  Will Billy find proof that the merger documents are forged?  Gwen and Neil kissed are they going to be a new couple?