‘The Young and the Restless’ (Y&R) RUMOR: Sharon Meets Patty Williams At Fairview – They Plot To Steal Sage’s Baby 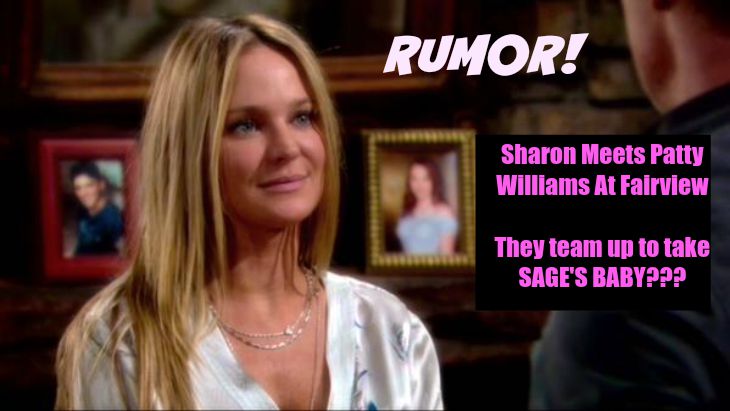 “Young and the Restless” spoilers are in and the show is about to take a crazy turn. Oh brother, if you were hoping TPTB wouldn’t go there with Sharon (Sharon Case), you would be very disappointed. Daytime Confidential reported an exclusive spoiler that Sharon would meet crazy Patty Williams (Stacy Haiduk) in Fairview, and they cook up a wild insane scheme that will not only bring Patty back to Genoa City, but Sharon will have the family she wants.

The only person other than Sharon’s doctor who knows she lost her baby is Mariah (Camryn Grimes). She swore to her that she would keep it a secret, for now. Mariah urged Sharon to be honest with Dylan (Steve Burton), but Sharon truly believes that Dylan would not be able to handle learning that he lost another child. So her plan is simple; she must get pregnant right away- then she will tell him the other baby miscarried. Her plan seems like a solid one right? And, if it fails, her stand by the plan is to get her grubby little paws on Sage’s (Kelly Sullivan) baby. How could it possibly fail?

Sharon has not been taking her bipolar medication, and without a pregnancy- her symptoms are likely to increase in severity. The fact that she ends up in Fairview says much about Sharon’s future storylines. Fans have been vocal lately about Pratt portraying Sharon Newman as a crazy woman. They stated she deserved happiness; however, Sharon Case is a wonderful actress who rocks whatever script they hand her.

Sharon may need a trip to Fairview to get away and healthy again. It is looking like she will run into Patty Williams, who may help her plan out how to steal Sage’s baby. The plan is destined for failure right from the start. Patty will convince her it is a fail-proof way to keep her paws on Dylan forever. It seems baffling to fans whom Sharon seems to pay for all her harebrained shenanigans; however, Victor Newman (Eric Braeden) never seems to face any consequences. Do you think Patty and Sharon will meet in Fairview? What is Patty’s real plan once she returns to Genoa City? Do you think Sharon and Dylan have a prayer of making it passed, say Christmas?