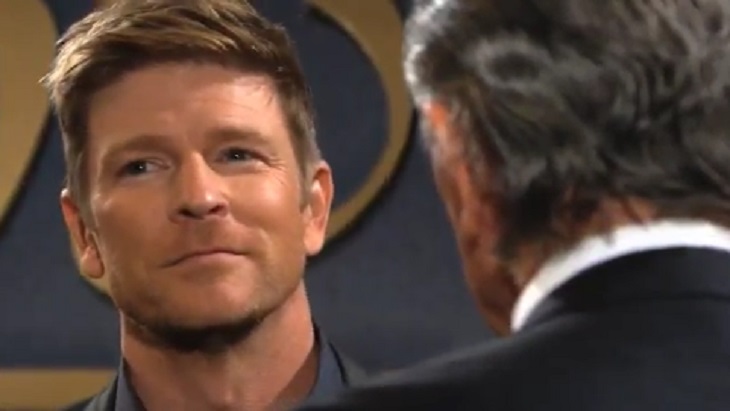 “The Young and the Restless” released an action-packed promo today and teased the Abbotts and Newman’s will again face off- and this time it could lead to someone’s death. The promo teases that Phyllis Summers [Gina Tognoni] and Billy Abbott’s [Burgess Jenkins] form an unlikely alliance based on their joint hatred for Victor Newman [Eric Braeden].

A battle is brewing, and lines have been drawn; the Abbott’s [Billy and Phyllis] have decided to declare war on Victor Newman, according to CBS Soaps in Depth. Phyllis feels like Victor MUST pay for bringing Marco [Peter Bergman] in her life [and bed], and Billy is reeling that Victor will get Adam [Justin Hartley] off with a slap on the wrist for killing his daughter, Delia [Sophie Pollono].

Billy is anxious about launching an attack on Victor because he just reconciled with Victoria [Amelia Heinle], and things are going well for them. He’s been able not to attack her father and even get along with him during Katie’s birthday party.

“The Young And The Restless” spoilers tease that Billy offers Victor office space at Jabot for one reason- to get closer to him to launch a war against him. He feels like Victor is directly responsible for everything that has gone wrong in his life from his marriage to Victoria crumbling to Adam’s behavior that led to Delia’s death.

In the promo, Phyllis tells Billy, “I am going to help you bring Victor to his KNEES!” Jack [Peter Bergman] warns Billy, “He’s out for blood; you better watch your step.” Billy refuses to allow Victor to scare him, and he continues his quest to make him pay for everything he’s done to him and his family over the years. Victor promises his daughter, Victoria, “I am going to end this once and for all!”

No one goes against Victor Newman and wins. Victor always comes out on top, so why would Billy and Phyllis even try? It seems like a clever way to have Billy end up presumed dead or hurt to make the Billy Abbott switch possible. At any rate, it is refreshing to see a plot to move away from Adam and Hilary [Mishael Morgan]. Do you think Phyllis and Billy can bring Victor to his knees?

Hatred runs deep and this time an unlikely alliance could take Victor Newman down! Don't miss #YR this week! #CBSDaytime