‘The Young and The Restless’ POLL: What’s The Big Shocker that will Interrupt Stitch and Abby’s Wedding? (VOTE) 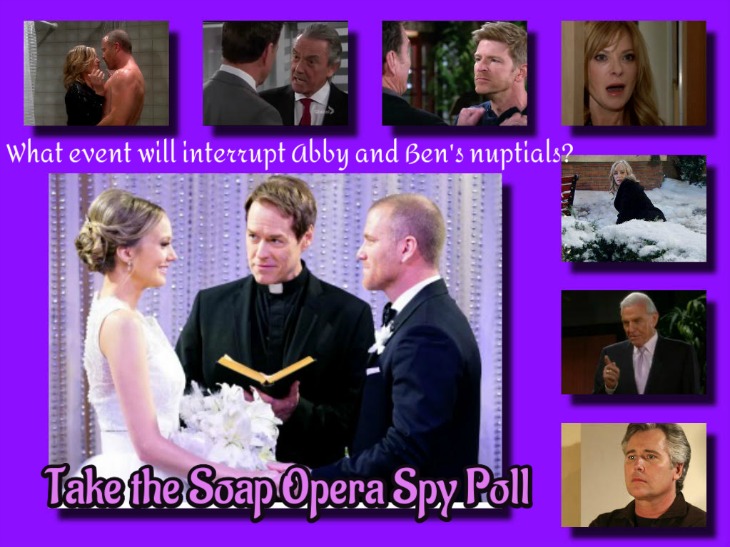 ‘The Young and The Restless’ (Y&R) spoilers reveal that there’s a major shocker coming at Ben ‘Stitch’ Rayburn [Sean Carrigan] and Abby Newman’s [Melissa Ordway] wedding. But what could it be? We’ve got some ideas about what could mess up their matrimony.

Check out these possibilities then vote in the POLL below for what you think will happen to shock all the assembled Abbots and Newmans at the New Year’s nuptials.

#1 Drunk Billy makes one heck of an entrance

Sure Billy Abbott [Burgess Jenkins] says he’s cleaned up his act, but we’ve heard that one before. Y&R spoilers indicate he’s going to make a huge bet in coming days that will go bad and leave him totally broke. That seems like an occasion for a drink (or five).

Will Billy stagger into the wedding drunk and humiliate Victoria Newman [Amelia Heinle]? Could that set the stage for jail, rehab or a major accident after Victor Newman [Eric Braeden] kicks him out? That would be a great way to set up the actor transition as Jason Thompson takes on the role.

#2 Ben makes a move on his mother-in-law

We know that Ben has strong feelings for Ashley Abbott [Eileen Davidson], but both Stitch and Ashley have assured Abby that there’s nothing there between them. Will Ben have a flashback to the night of the fire and realize life’s too short not to follow his heart?

Will Ben decide even though it’s more appropriate for him to marry Abby that he wants her gorgeous mom instead? Could he stop the wedding at the last minute and tell Abby he loves her, but loves her mother more? That would definitely be gasp-worthy.

Dr Simon Neville [Michael E Knight] likes to experiment on people with unlicensed medical treatments. If he scores an invite to the event thanks to Ashley – who could bring him as her date – might he decide to pull off a brazen social experiment and spike the punch?

#4 Ashley has a medical crisis

Something is really wrong up in Ashley’s noggin – maybe a brain tumor or yet another aneurysm – maybe both. She’s just trying to make it through this wedding so she can focus on her research with Neville to try and cure what’s ailing her.

Will Ashley fall flat on her face as she walks down the aisle to take her seat as mum of the bride? If she falls, will she try to blame it on too much champagne so no one knows how sick she really is and the wedding can go on despite her drama?

#5 Jack and Victor have a showdown

Anytime Jackie Boy and the Mustache are in the same room, there will be drama of one sort or another. Could Jack Abbott [Peter Bergman] and Victor get into it over Victor’s recent lawsuit? Perhaps if they do have a confrontation, Abby can talk them into making it wedding-appropriate.

Who wouldn’t want to see Victor vs Jack in a karaoke contest, limbo showdown, or epic dance off? That would be a sight that would have every jaw in the place dropping. It might be a healthier way for these two to work out their aggressions – dropping a sick beat instead of corporate hijinks…

#6 Kelly comes back from the dead

It would definitely be a stunner if Ben’s sister Kelly Andrews [Cady McClain] came back from the dead. Imagine Jack’s surprise to see the woman he found lying dead in the bed next to him wandering into the wedding of his niece.

Kelly being alive would shock Ben, Jack, Phyllis Newman [Gina Tognoni], Victor and pretty much everyone in town. On the plus side, that would at least mean that Stitch has some family on his side of the aisle.

When Jerry Douglas reprised his role as ghost John Abbott recently, it was disappointingly brief. Perhaps he’ll make a larger appearance at the wedding and offer a toast from beyond the grave to the happy bride and groom.

If Neville spikes the punch, no telling who they all might see. But it would be a nice way for John to celebrate the wedding of his grand-daughter. Perhaps he’ll just appear to Ashley again as a symptom of her illness and tell her she did a good thing getting Abby married off to Stitch.

What do you think Y&R fans? What’s the big wedding shocker that will interrupt the nuptials of Abby and Stitch? Vote in the POLL below and share your thoughts in the comments section.

Be sure to come back to Soap Opera Spy often for tons more “The Young and The Restless” spoilers, news and chat.