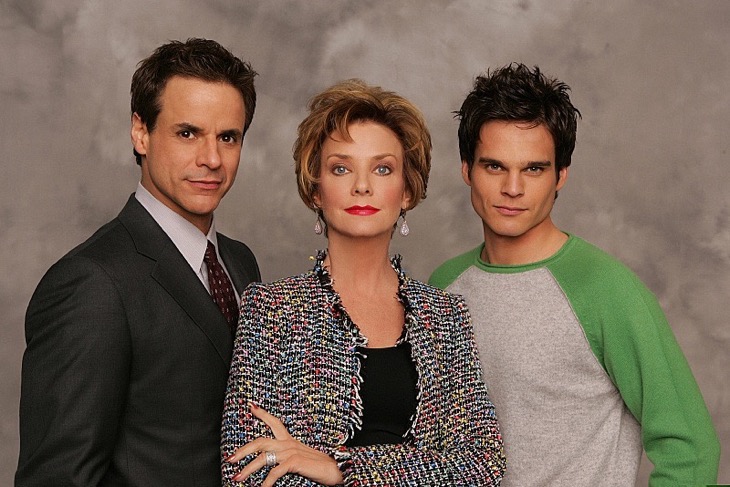 “Young and the Restless” star Judith Chapman (Gloria, “Y&R”) posted to Facebook that she isn’t sure when and if Gloria will return to the show. For quite some time, fans have speculated that Chapman was axed from the show-, and it appears; they were right. She made one thing clear; if the powers that be (TPTB) want her on the show- she is ready to work. 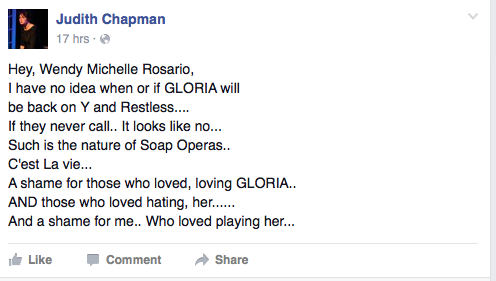 Last year, Michael (Christian LeBlanc) battled cancer alone, for the most part. Many fans felt like they should have brought his mother in the storyline. It would have made a huge impact to show how cancer affects a mother. However, the show chose not to go that route. Instead, they decided to let Michael battle cancer all by himself- without letting anyone close enough to help him.

Gloria was a character many people loved to hate. She has always proven that she is a survivor, and will do whatever it tastes to come out on top. One of the worst storyline decisions was to pair her with Jeffrey Bardwell (Ted Shackelford). It really was the end of her character.

The last time Gloria was seen on the show was when Michael hurt himself exercising. He didn’t tell her he had cancer, just revealed he hurt himself jogging. Lauren (Tracy Bergman) was clearly upset by his injury but never told his mother that he was ill, either.

It looks like from her posts that she is preparing her fans for her permanent departure from the show. Many “Young and the Restless” fans adore her and her tacky style and her departure will be a huge disappointment to many. She told her fans that this is the life of choosing a career as an actress on a soap. “Sometimes they call, sometimes they don’t. Life goes on. Thank you to all my fans for sticking by me and Gloria Abbott.” SOSer’s, do you miss Gloria Abbott?

‘The Young and the Restless’ (Y&R) RUMORS: Did A Jealous Gwen Push Hilary Down The Cliff?