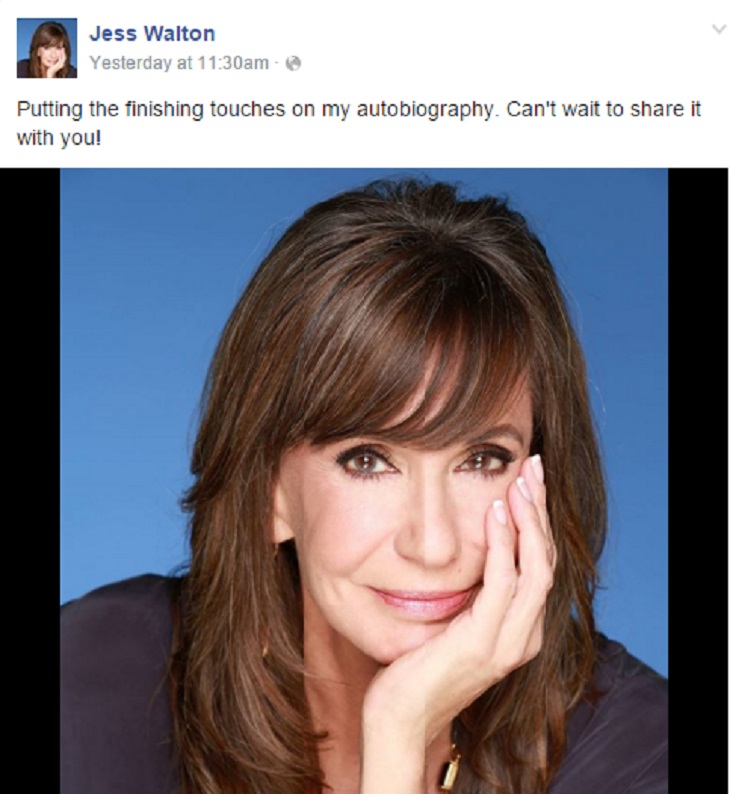 “The Young and the Restless” vet, Jess Walton posted to social media that she is putting the finishing touches on her book. She tells her fans that it has taken her quite some time to find the words to tell her life story, but she cannot wait for her fans and followers to read her autobiography.

Jess Walton has portrayed Jill Foster Abbott Atkinson for nearly 30 years. Before landing on “Y&R,” she was a regular on “Gunsmoke,” “The Rockford Files,” and “Capital.” She has won three Emmy awards and has been nominated seven times. She has a daytime career that many actors dream about. Jess is quite vocal about her admiration and love for the late Jeanne Cooper. She posted, “Jeanne Cooper is missed and loved, every day.”

Jess has been married to John James since 1980. James is an author and a founder of The Grief Recovery Institute. The couple has two children, Cole and Allison. Jess announced her semi-retirement last year, stating she wanted to spend more time at her Oregon home instead of working in California. She expressed that she had worked extremely hard her whole life and felt that she needs to take it easy now. Fans speculated that her health may be compromised, and she COULD be hiding an illness. She never confirmed any health condition.

Jess Walton teased fans she will be releasing her autobiography soon. She noted, “Putting on the finishing touches on my autobiography. Can’t wait to share it with you!” Are you going to buy her book? What kind of juicy soap secrets do you think she could reveal in her tell-all book?

‘The Bold and the Beautiful’ Spoilers: Things Get Tense When Julius Arrives for Thanksgiving – Eric Opens Up About Memory of Stephanie