‘The Young And The Restless’ News: Alyvia Alyn Lind Named ‘Star Of The Week’ For Faith’s Emotional Scenes With Grandpa Victor 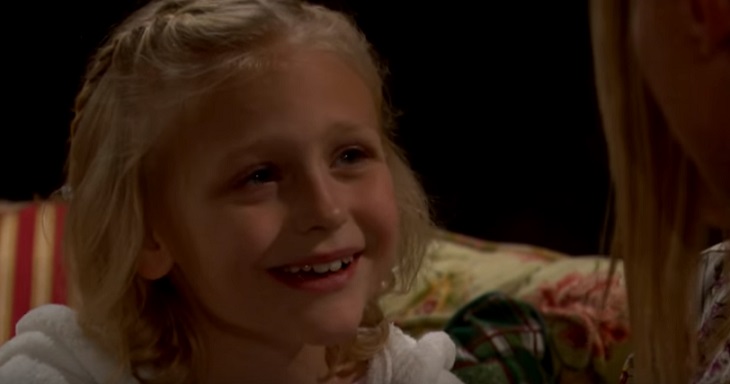 “The Young and the Restless’s” Alyvia Alyn Lind earned this week’s Soap Opera Spy star of the week. Alyvia has earned the hearts of “Y&R” fans as the adorable Faith Newman. This week, she earned her mention in her heart-warming scenes with the great Victor Newman [Eric Braeden].

Just before Christmas, Faith wanted to know when Nikki Newman [Melody Thomas Scott] was going to have her Christmas party. She told her that she was not sure if she would have a party this year, as Victor was not in the celebrating spirit with his company’s future in danger. The news upset Faith, and she confronted her grandfather in an emotional scene.

Nikki planned a shindig to help celebrate Christmas and invited all of Genoa City to attend. It seemed like everyone who was anyone was present—except one person, Victor Newman. Faith realized her business tycoon grandpa was working through the party and asked Nikki if he was coming. Nikki told her he could not get away from the office, but he wishes he could be there. Faith’s face told it all—the seven-year-old was completely disappointed.

Faith shows up at Newman Enterprises to confront her grandpa about him skipping out on the Family’s Christmas bash. Victor tried to explain to her why he skipped the part, and how important his job was to the people of Genoa City. He explained that many people depended on him for a job, and he couldn’t let them down. Victor sat her in the chair behind his desk and told her one day she would run this company. Faith replied, “If it means I don’t have time for family; I don’t want this.”

Related: Who Is Your Favorite Crazy ‘Y&R’ Therapist Over The Years?

The scene highlighted Alyvia Alyn Lind’s talent and outshined Eric Braeden in the emotional scene. She showed the Grinch [Victor Newman] that he was working too hard, and he needed to take time out for his family in this special time of the year.