‘The Young and the Restless’ Interview: Justin Hartley Reveals Behind the Scenes Information of Y&R 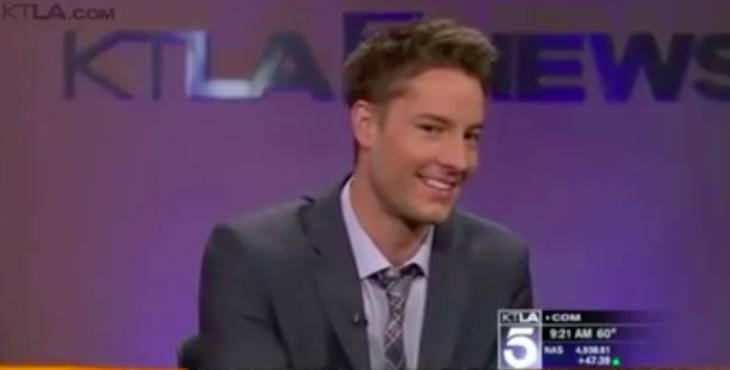 In a recent interview with KTLA News actor Justin Hartley of “The Young and the Restless” gives his fans a behind the scenes look into the life of an actor on the popular daytime soap opera.

As Justin Hartley sat down and spoke the the news anchors he jokingly said that “The Young and the Restless” was celebrating their 420th anniversary. They are actually celebrating 42 years on the air and Hartley discussed how daunting it was to be a part of a show that was so successful.

When asked about how intimidating it must be to be on such a long running and successful show, Justin Hartley responded by saying “Well yeah, think of something that has been on air and successful, and number one for almost as long as I’ve been alive…”

Justin Hartley then reveals that one of the most difficult parts of the job is actually memorizing the immense amount of lines that come along with filming a soap opera. Hartley says that he may have to remember 30 pages of script in one day, with no teleprompter, all while putting themselves into their character fully. Hartley says, “it’s probably better that we don’t have [teleprompter] because I would be reading it,” noting that while it is difficult to film without a teleprompter, it allows him to focus on his character.

One of the reporters gives a run down of Hartley’s character Adam Newman and it makes Hartley’s head spin. The reporter says, “From plane crash to volcanoes, and now you’re posing as someone else, you once confessed to a baby swap, one girlfriend died during a volcano…there’s a lot going on. Do you even know?” Hartley just smirks and says “Nope!” Hartley reveals that is what makes his character so much fun to play though. He says he loves the fact that there are times when he is confused himself, and because of that, it makes his role more interesting.

Hartley also talks about the demanding film schedule and says that The Young and the Restless can film as many as six episodes per week. As we mentioned, Justin Hartley will be returning for the third seas of the primetime ABC series Mistresses. We aren’t sure what this will mean for Justin Hartley on The Young and the Restless, but we are hoping that the filming schedules do not conflict. We reported earlier that Hartley has two other films in post production, The Challenger and Another Time, so he will also begin promoting those as well.

Hartley seems to be the quite the busy man lately. Between filming six episodes a week of The Young and the Restless, returning to season 3 of mistresses, and possibly preparing for a press run for The Challenger and Another Time, we wonder how Hartley is still functioning. It’s super impressive!

Do you love Justin Hartley on The Young and the Restless? Are you excited to see all of the other projects he is currently working on? Let us know in the comments below.

‘The Bold and the Beautiful’ Spoilers: Ivy Admits She Can’t Be Deported, Liam Mulls Over Marriage Annulment – Maya and Caroline Call Truce