‘The Young And The Restless’ Interview: Jensen Buchanan Discusses Elise Moxley’s Affair With Victor Newman, Plus Other Storylines 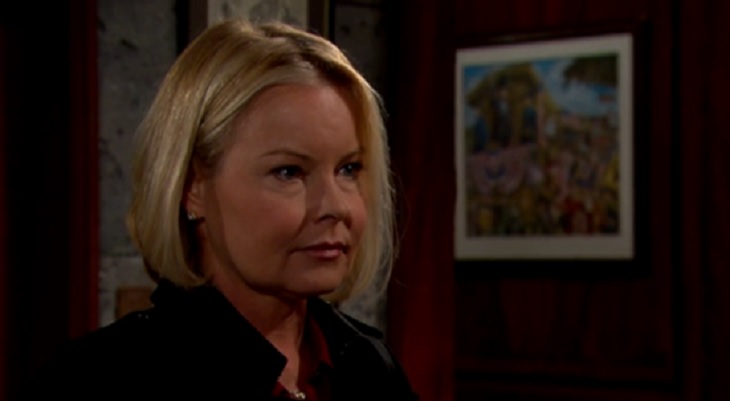 “The Young and the Restless” newcomer, Jensen Buchanan sat down with Soap Central to reveal details about her scandalous affair with Victor Newman [Eric Braeden], her cat fights with the legend, Melody Thomas Scott on-screen, and how she feels about coming out of semi-retirement and returning to daytime television.

Jensen Buchanan is not a stranger to daytime television. She has experience on “General Hospital,” “Another World,” and “One Life to Live.” Buchanan will now portray a judge responsible of Adam Newman’s [Justin Hartley] appeal, named Elise Moxley. She barely was introduced in the storyline, when BAM she dropped one heck of a bombshell- the gorgeous judge had an affair with Victor Newman!

Jensen said they warned her that she would hit the ground running with her storyline. They wouldn’t warm her up to storylines; she would immediately be thrown in a HUGE mess with Adam’s appeal and Nikki Newman’s [Melody Thomas Scott] rage over finding out about the affair. Jensen said, “They just wanted to make sure that I understood I wasn’t just going to be sitting on the bench and ruling on a case. This character has some backstory, and God willing, some potential to do some more stuff in the future. They told me that it was a fleshed-out character, and they didn’t tell me who it was with, but they told me I had some back story with a major character.”

Buchanan said it was kind of a shock to be immediately thrown in a storyline with Eric Braden and Melody Thomas Scott. She stated,  “Oh, he is such a nice man. He is so good. Everyone I’ve worked with; I’ve been so impressed with the quality of their work. They’re really good actors. However, Eric Braeden is just being a classy guy. He was just charming and lovely to me when I came on the set. He’s a really, really nice man. I think a lot of people know that about him, but I had never met him before. He’s kind of a legend, you know what I mean? He is. And he’s just really a pro, and I guess the word that comes to mind is he’s just a really, really charming man. So I was happy to be involved with Melody and Eric. I felt like I was in good company.”

Even though Jensen was a seasoned soap opera actor alum, she admitted she felt extremely nervous about coming back to work. She explained, “Everyone else knows each other so well, and you don’t.  I wasn’t in the saddle for a while, so to speak. And you know what, going into it, I thought; I was not going to be nervous. I know how to do this. However, I was a little nervous over my first couple of scenes. It took me a bit to settle into it and relax. When they started coming down, and I said to myself oh, lord, here we go!”

Jensen said that she really enjoyed the fast-paced environment of soap operas. She explained that after her stint on “Another World,” she tried a few prime-time shows that didn’t really pay off well. She stated, “I love the pace of soaps, and I like the challenge under those circumstances of a pretty speedy pace, trying to deliver good work. That really appeals to me, so I love it. I feel like it’s a really highly produced show, and it shows in the writing and in the set design. It’s such a gorgeous show, and I think truly, the prettiest show I’ve ever been on.”

Buchanan noted that she enjoyed the past paced storylines as well. She said, “Things really move along rapidly, at least from my perspective. A lot of information gets doled out in a single episode.”

Soap Central asked her what viewers can expect to find out about Elise. She revealed at the moment, the role expected to be short-term, but that could change at a later date. She explained, “I don’t think she would have been able to achieve the things she has if she wasn’t pretty smart and probably pretty savvy, too. That’s why I think while, just in the beginning, it was a little shocking for her to be face-to-face with Nikki and Victor. However, in the long term, she’s an ethical person, but I think she knows how to play the game. And maybe she’s a little more calculating than some of the characters I’ve played in the past, which has been very fun for me. Really fun. She definitely has a little of a dark side; I think. Some of her behavior I wouldn’t call mainstream for a judge. So there is something going on there, and there’s room to flesh it out more, for sure.”

Jensen noted that she was thrilled to be working one-on-one the talented Melody Thomas Scott. She explained, “To tell you the truth, any time I share any screen time with her is heaven. But, yeah, I like it when characters appear one way to a lot of people but then your kind of see this other side of them that is either exposed in private or just with certain people that they kind of let their guard down or show their fangs. I mean, I think she’s too smart too, in a really blatant way, start taking on Nikki and Victor, but I think she’s calculating enough to pull some strings behind the scenes.”

Social media is a new thing for Jensen Buchanan [ @JBuchananYR]. She said at first she was blown away with the actor’s taking pictures of the set and sharing so openly on Twitter or Facebook. She noted the publicity department at “Y&R” gave her a crash course in how to navigate Twitter. She explained, “I was completely oblivious to that aspect of the business now, but boy; I’m learning fast; that’s for sure. I do look at my tweets, and I tweet back! By the way, [I really need to figure out how] to turn the notifications off on my emails. I can’t manage it. It’s getting a little too crazy in the inbox!”

Jensen laughed while retelling the funniest tweet she has received as of yet, “Somebody asked me on Twitter if it was true that I helicoptered into Another World. That’s an urban legend. It would have been nice, but not true! It made me laugh when I thought about my five-hour drive down from Vermont into the city. There was no helicopter involved!”

‘Days of Our Lives’ Spoilers: Hope Rips Into Steve and Kayla for Hiding Bo’s Condition – Ciara Puts Aside Her Own Grief to Comfort Chase