The Young and the Restless Spoilers: Ian Ward and Austin In Cahoots? Is Austin Related To Ian or Joe Clark? 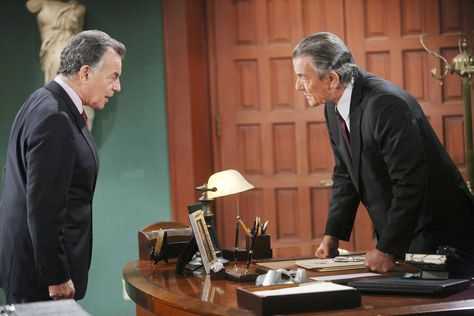 The Young and the Restless spoilers are digging further into the shady goings on of Genoa City’s missing partygoer Austin Travers [Matthew Atkinson]. Many questions and few answers have come up in the last few weeks surrounding the young twenty something lad Austin.

We know Austin definitely had a dark side that he demonstrated when he kidnapped Avery Bailey Clark [Jessica Collins] at gun point and shot and almost killed Chief Paul Williams [Doug Davidson] last year.  Austin’s explanation for his bad behaviour was he went after Avery because she was the lawyer who was instrumental in getting the man who murdered his mother freed from jail. At the time Avery worked for the Innocence Foundation, a foundation that helped falsely accused people get out of jail.

Shortly, after Austin committed these crimes, he ran away with a much younger and innocent Summer Newman [Hunter King]. Austin and Summer had known each other for about five minutes when they eloped. YR rumors are teasing that Austin picked Summer not because he “fell in love with her,” but rather because he was told too by sinister villain Ian Ward [Ray Wise] who hired Austin to do his dirty work.  Doesn’t this whole thing just sound like Ian, he is the master manipulator after all.

Ian’s hatred for Victor Newman [Eric Braeden] is well known. Ian knows the best way to get back at the multi-millionaire for having him thrown in jail, is through Victor’s beloved family.  Ian is rumored to have ordered Austin to marry Summer and create havoc in her life by having an affair with Victor’s daughter Abby Newman [Melissa Ordway].

The Young and the Restless spoilers are also reporting that Ian plans to return to Genoa City just as all hell breaks lose and Victor’s family members are in all sorts of trouble. We are also going to learn that the Redevelopment Deal that Joe Clark [Scott Elrod] was working on, was also backed by Ian. He knew this would pin Nikki [Melody Thomas Scott] against Victor due to Nikki’s son Dylan [Steve Burton] owning the coffeehouse. Of course, unable to deal with her stress, Nikki returned to her biggest distresser vodka!

How else will Ian use Austin to achieve his goal of bringing down the Great Victor Newman? Rumors are swirling that Austin is found alive. Does Ian know if there is a connection between Joe and Austin who have been rumored to be father and son or is Austin Ian’s son? Can this just be another part of Ian’s plan? With many of Genoa City’s in turmoil after last week’s disaster week, the next few weeks promises to be extremely captivating!

‘The Bold and the Beautiful’ Bio: Brooke Logan’s History Explained – Her Husbands, Lovers and Children