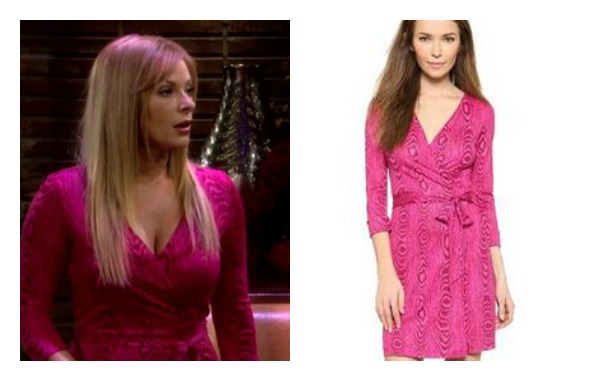 Our Soap Opera Spies with a passion for fashion have found another steal-worthy style piece. The Young and the Restless has tons of eye-catching looks. Now, you can get Kelly Andrew’s Pink Dress For Less and steal Cady Kelly McClain’s Style!

Kelly gave Jack love potion, but if that doesn’t work, her dress will do the trick! If you need a complete recap on the Kelly’s attempt at winning Jack’s love via magic, click here to catch up on The Young and the Restless Spoilers: Jack Makes Passionate Love To Kelly-Under The Influence Of Victor’s Stolen Love Potion…

The dress is a New Julian Two Mini Wrap Dress by Diane von Furstenberg. The tonal, graphic grain print is rendered on silk jersey and styled in a mini-wrap silhouette. It’s available in pink, as shown by NAME, and a lovely deeper blue hue. You can find the dress at Amazon. It’s also available ShopBop.

If you are on a tighter budget, you can score a similar style via Amazon with this cute Women’s Celtic Braid Wrap Dress by Shelli Segal at about a third of the price!