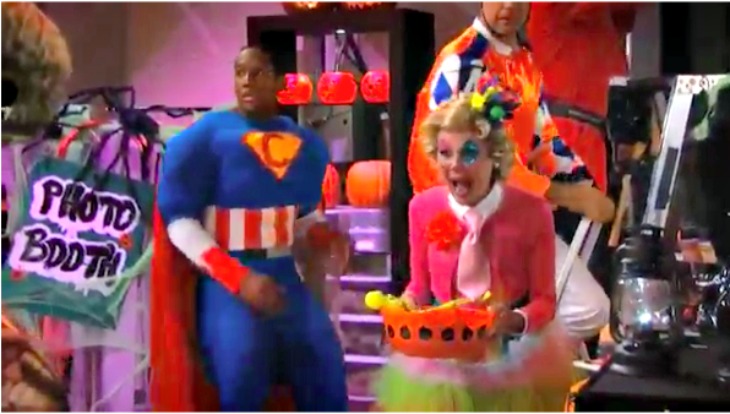 “The Bold and the Beautiful” October 26 through 30 promo video are in, and it looks like the Forrester’s will have quite the Halloween bash. Wyatt [Darin Brooks] admits to Ivy [Ashleigh Brewer] he has thought of her in a revealing Halloween getup. “Big Brother 17” houseguests crash the celebration with spooky costumes. It’ll be a party to remember.

“This Halloween will be like no other,” the promo said. Quinn [Rena Sofer] is excited when Wyatt tells her that he has fallen in love with Ivy. She seemed genuinely excited for him. Meanwhile at Forrester, Ivy and Thomas [Pierson Fodé] are talking about what to wear at the festive party, and he has an idea. He brings her a very revealing dress. She said, “Can you imagine me in this?” He replied. “I have many times.” She looked at him in a playful way. Wyatt opens the door and asked, “Is there something going on in here?”

The Halloween party looks to be action packed. “Big Brother 17” houseguests- Meg Maley, James Huling, and John McGuire make a special one-time appearance on the daytime soap opera. They looked as if they had fun shooting the cameo appearance, and were dressed up in amazing costumes. The party is sure to have fireworks with so many strong personalities at the event.

Will Ivy ruin her relationship with Wyatt when Liam shows her attention? How will the “BB17” cast handle their roles on the show? Find out next week on “The Bold and the Beautiful” airing on CBS.

Don’t miss the cast of @cbs_bigbrother on #BoldandBeautiful’s #Halloween special this week!