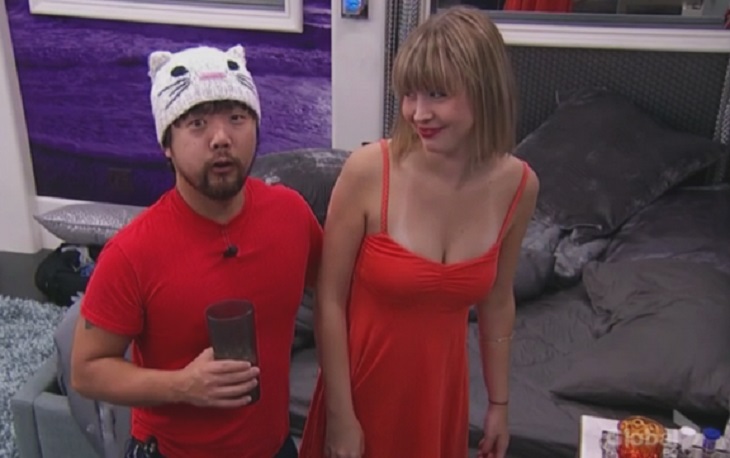 “The Bold And The Beautiful” spoilers tease that three more Big Brother 17 players are headed to the CBS soap opera – and will be airing on episodes in October.  Meg Maley, John McGuire (Johnny Mac), and James Huling all shot scenes with the “Bold And The Beautiful” cast – and they will be airing during the Halloween episodes at the end of this month.

Related: Brooke and Steffy Speculate on Ridge’s Beef with Thomas – The Pressure’s on as Ivy Preps for New Gig

According to B&B spoilers from Entertainment Weekly: Meg, John, and James will all be guests at a Halloween party and mingling with some of the soap cast.  And, yes – it’s a costume party!  Entertainment Weekly obtained some exclusive behind the scenes photos of the Big Brother players on the set of the daytime drama.  All three of them are decked out in hilarious costumes.  James Huling appears to be some sort of camouflage/hunting jester.  And, Meg and John are rocking some pretty hilarious 80’s get-up.  Although, both Mag and Johnny Mac are pretty quirky – so for all we know those might not even be costumes.

It has become traditional for Big Brother contestants to do guest stints on “The Bold And The Beautiful” after the seasons are over.  Meg, John, and James are not the only players from Season 17 to get walk-on roles on the CBS soap opera.  Their former roommate Jason Roy actually played the role of a pizza delivery guy this week.  Ironically, the one houseguest that begged to be chosen for a B&B walk-on role, Austin Matelson, still has not been given one.

Are you excited to see Meg, James, and John on “The Bold And The Beautiful?”  Let us know what you think in the comments below!

‘The Young and The Restless’ (Y&R) News: Cady McClain Helps Raise Domestic Violence Awareness – Receives Certificate of Recognition From May of Los Angeles