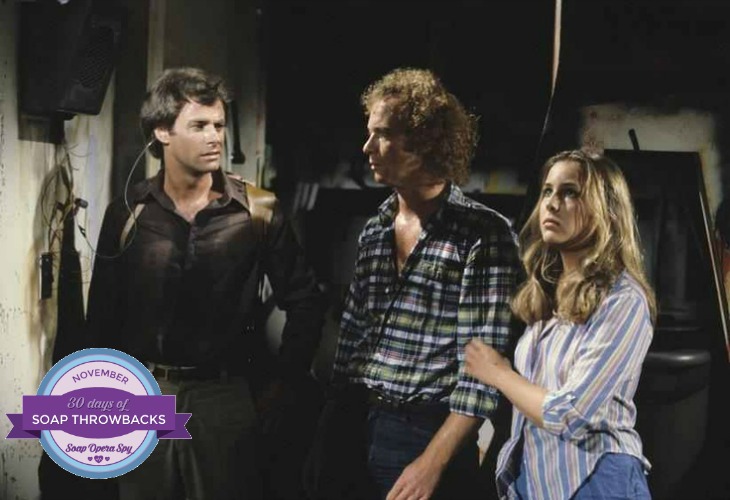 November is the month of Soapy throwbacks, and today’s blast from the past is focusing on “General Hospital” the Ice Princess storyline. The plot involves Luke [Anthony Geary], Laura [Genie Francis], Robert [Tristan Rogers], and, of course, the evil Helena Cassadine [Elizabeth Taylor].

Scotty Baldwin [Kin Shriner] escaped to Mexico before Laura could get a divorce from him. She had fallen in love with Luke and wanted to end her marriage with Scotty. She felt bad about wanting to divorce him because she felt like he was a good man. She couldn’t fight the urge she felt to be with Luke even though she was a married woman. She wasn’t able to find him and began to worry about her wedding planned in 1981 with Luke.

Luke begins to work with the Quartermaines and got a sample of what money and power can bring. Edward [David Lewis] and Alexandria Quartermaine [Renee Anderson] are searching for the Ice Princess, the world’s largest UNCUT diamond. The bad news was they were not the only ones looking for the precious diamond; Mikkos Cassadine [John Colicos] was also searching for it, and he wouldn’t be happy until he had the diamond and achieved world domination!

Robert Scorpio, a World Security Bureau [WSB] reveals that the Ice Princess is part of a statue and has a formula for a substance called carbonic snow, which has the amazing ability to freeze WHOLE towns. He told him that the power was extremely dangerous if it fell in the wrong person’s hands.

Eventually, Alexandria gets the Cassadine’s to trust her and works second in command to Mikkos’ brothers Victor [Thaao Penghlis] and Tony [Andre Landzaat]. She gets possession of the diamond and delivers it to the Cassadine’s on their yacht, which is now called the Haunted Star. Luke and Robert hide on the yacht, and they discover the Cassadines captured Laura.

The luxury boat arrives on a private island where they learn that Mikkos plans to use the carbonic snow as a bargaining tool, essentially holding the whole world for ransom. To prove the snow had a power, he uses it on Port Charles. In the middle of the summer, the whole city turned into a snowy, freezing blizzard.

Alexandria and Tony end up dying in an effort to kill Mikkos and stop his quest for world domination. Luke gains access to his machines and turns off the freeze and overpowers and kills Mikkos. Luke, Robert, and Laura walk away from the ordeal as Port Charles heroes.

Laura and Luke plan their wedding; a huge event on November 17, 1981. Bobbie [Jacklyn Zeman] Luke’s sister planned to attend the event even though she didn’t feel like she could embrace Laura as a member of her family. She felt like Scotty and Laura were a great couple, and she was upset; she left him for Luke. For Luke’s sake, she decided to let the bitterness go and welcomed her into the Spencer family.

Helena Cassadine, widow of Mikkos showed up at the wedding to place a curse on the couple to revenge her husband’s death. The curse is felt nearly immediately. In 1982, Laura disappears on the pier. Later, Luke is told Laura was murdered, but he doubts that she is dead. Did Laura really just disappear? What happened to her? Obviously, she wasn’t dead as she is alive and well in Port Charles 35 years later.

To see all our November Throwbacks – Head over HERE!

‘The Bold and The Beautiful’ Interview: Ashleigh Brewer Shares Her Earliest Childhood Memories