Nicole’s Weekly Rants & Raves: What Were Your Favorite And Least Favorite Storylines For the Week of September 21, 2015 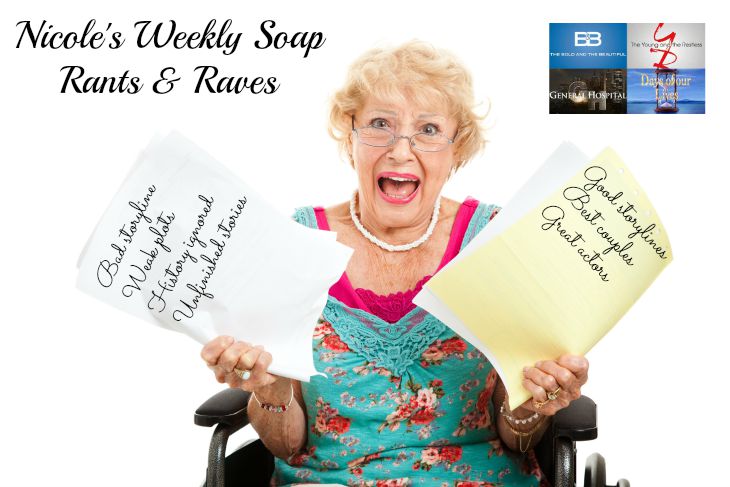 Each week let’s dish on our favorite and least favorite storylines and annoying things the characters on “The Young and the Restless,” “Bold and the Beautiful,” “General Hospital” and “Days of Our Lives” say and do. And let’s offer up some raves the storylines and character actions we found praiseworthy.

Let’s start this week with Abby and Stitch’s break-up in a hallway of a hospital. This behavior is not tolerated in hospitals – not by employees and not by guests. Another medically related rant – when Sage was having pain again she said, “we need to call daddy.” Why are you calling daddy? Why aren’t you calling 911? Or at the very least, call up to the main house – someone from the main house could have gotten there much faster than Nick could. Thankfully Victor walked in and Sage was safely taken to the hospital.

As for raves about this week’s “Y&R” we need to give Ashley Abbott credit where credit is due. When Jack Abbott said the Newmans and the Abbotts needed to band together, Ashley said, “There’s so much wrong with that statement I don’t know where to start!” High five to Ms. Abbott! We also need to give Victoria little bit of a rave – even though she backed down – when she confronted Nick about his intentions regarding Newman Enterprises and asked him if he was going to kiss Victor’s ring!

This rant is about the writers – the last time we checked you couldn’t just run off to the courthouse, get a marriage license and get married the same day. In New York State there is a 24 hour waiting period. Even if Jake/Jason wanted to run off with Liz to the courthouse and get married they would have had to wait 24 hours. Until the Jason reveal were stewing about almost everything related to “GH” right now.

Our “General Hospital” rave of the week goes to Maxie and Dillon as they commiserated over their absentee fathers. We got to see Dillon’s vulnerable side and Maxie gets points for showing her reasonable side and offering some excellent advice – just accept your father for the man he is and don’t try to make him over into the father you want him to be – to Dillon about how to handle his relationship with his father Paul. Kudos!

BOLD AND THE BEAUTIFUL

On the “Bold and the Beautiful” we’re wondering if money equals same day lab results. Yes, we understand that Ridge knowing his test results regarding his infertility was important to HIM but – and we’re speaking in generalities here – lab results usually take 24 hours and sometimes longer. This wasn’t an emergency. And Ridge just sat right there in the doctor’s office, made himself right at home and waited for the results to come back. Why would any doctor put up with that? Money, money, money?
Caroline’s blood test results coming back so soon was a little more believable, but not by much. The doctor didn’t suspect that the new Mrs. Forrester was pregnant – and Dr. Li did say that the notes from Caroline’s last checkup showed she was healthy. But again – a rush on that bloodwork! It just seems a bit unrealistic to us.

The scene with Ric, Zende and Nicole was AWKWARD! Was CBS promoting Thursday night football or what? Yes, Zende and Nicole were up on the rooftop enjoying some time together – but Ric appearing and congratulating them on getting together was just – weird. Wonder if we’ll see a similar scene next Thursday?

As for raves we have a couple – let’s start with Ivy! What has she got up her sleeve? You know she is NOT groveling – it has got to be an act! Ivy is way too tough for the whole bowing and scrapping at the feet of Steffy Forrester. There has got to be more to this storyline!

And a rave to Brooke this week – when Ridge told her he was infertile she just held him and comforted him. And she gently persuaded him to go home and tell his wife – as it should be. And he did.

We really don’t have much to complain about when it comes to “Days of Our Lives.” We’re frustrated a bit because we’re pretty sure Ben is the serial killer, but we think the writers are going to throw us a curveball and it’s going to be someone else. But we do have a rant unrelated to storylines. Why does it seem as of late Adrienne, Abby and Jennifer are all frequenting the same salon – or in Abby and Jennifer’s case they’ve missed a few appointments. Not only that – but Abby’s hair looks kind of oily and stringy. Mostly we’re upset that Friday’s “DOOL” was interrupted by either the Pope’s address – or Speaker of the House John Boehner’s resignation.

As for raves we’re really enjoying having our veteran actors back on “Days of Our Lives”! We were especially excited to have Andre DiMera and his wicked, wicked ways back in town. We can’t wait for Bo to actually get back to Salem and reclaim Hope’s heart!

‘Days of Our Lives’ Interview: True O’Brien Talks On Being Fired by DOOL – ‘Caught Off Guard’