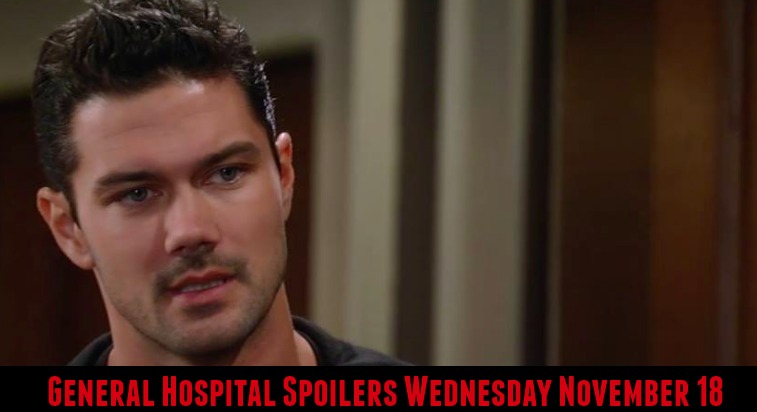 Lots happening on Wednesday – these ‘General Hospital’ spoilers are for the November 18th episode.

Franco [Roger Howarth] is arrested for the Carly Corinthos [Laura Wright] hit and run, but does Carly think that after all this time Franco came after her for more revenge? And will this see Franco fired from the job he just got back at GH? Morgan Corinthos [Bryan Craig] will need to warn Kiki Jerome [Hayley Erin] that the cops are looking into the crash.

Lulu Spencer [Emme Rylan] tells Maxie Jones [Kirsten Storms] that she saw Dante Falconeri [Dominic Zamprogna] and Valerie Spencer [Brytni Sarpi] together last night in his cop car looking all cuddly on stake out. Will Lulu go forward with separation papers? Later, Lulu gets an email from Valerie that she misinterprets terribly and that may have her take extreme steps.

Dante tells Valerie that something she did on the job could have got him fired. What did she do? Did she pull a stunt on stakeout to try and get the information they need? Will Dante end up in trouble? And will Lulu listen if Dante tries to explain that he and Valerie didn’t ask to work together but were stuck with each other? Plus things will be worse when Lulu also finds out Dante has been talking to a lawyer.

Paul Hornsby [Richard Burgi] notices Anna Devane [Finola Hughes] dropped a bottle of mental meds. How will Paul use this to further leverage her? We know he’ll take advantage. Paul just bedded Ava Jerome [Maura West] and will he now go to work getting more intimate with Anna? Paul seems to have both business and personal agendas at work.

Liz Webber [Rebecca Herbst] goes to the Q mansion looking for Jason Morgan [Billy Miller] and talks to Michael Quartermaine [Chad Duell] and Sabrina Santiago [Teresa Castillo]. Will Liz interrupt a discussion about Michael wanting to marry Sabrina and her refusing him again? Liz says Jason didn’t come home last night. Once she figures out Jason is looking for answers, she’ll be on his tail.

Sam Morgan [Kelly Monaco] also wants to go after Jason but Patrick Drake [Jason Thompson] has finally had enough of her waffling and tells Sam flat out that he may not be there waiting if she runs off after Jason and abandons he and Emma Drake [Brooklyn Rae Silzer]. Good for him. He doesn’t need to let her keep walking all over him.

Related: It’s Sam Vs Liz in the Battle for Jason and the Gloves Are Off!

Jason talks to Damien Spinelli [Bradford Anderson] and says even though he doesn’t remember their friendship, he needs his help. Did Jason drive all the way to Portland? Spinelli will be happy to help his former BFF get the answers he needs on Cassadine Island from Helena Cassadine [Constance Towers]. Will The Jackal and Stone Cold ride again?

Don’t miss a moment of Wednesday’s show and then come back to Soap Opera Spy for more ‘General Hospital’ spoilers, rumors and gossip!