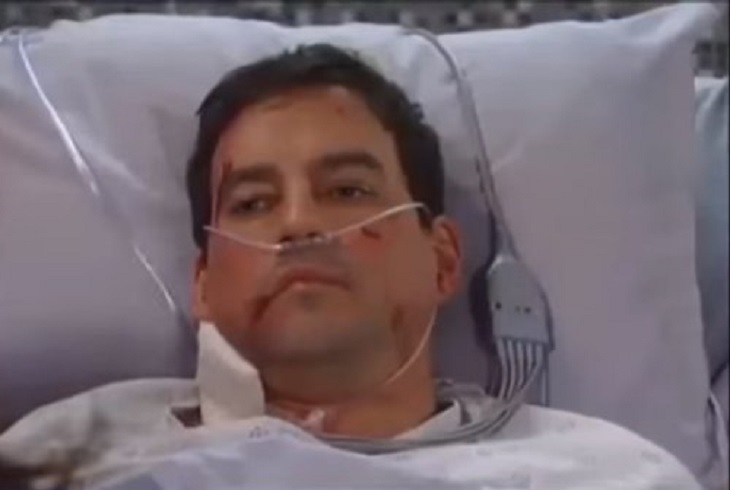 ‘General Hospital (GH) spoilers reveal that Nikolas Cassadine [Tyler Christopher] won’t waste a moment of the time he spends recuperating from his injuries at General Hospital regretting the fight he started with Jason Morgan [Billy Miller].

There remains a question of whether Nikolas was hoping Jason would beat him up enough to warrant an assault charge or if it was just a lucky break (no pun intended) for the Cassadine prince. But the end result is that Nikolas will soon have Jason under this thumb.

There’s already been a lot of talk about Jason’s criminal record and him being lucky to make bail. If Nik presses charges and the DA goes for attempted murder, Jason could spend a decade or two in Pentonville.

And considering that DA Paul Hornsby [Richard Burgi] is all about punishing the Corinthos cartel, he would likely throw the book at Jason to keep him from being an asset to Sonny as this mob war continues to escalate.

Jason in Pentonville might be good for Paul, but it’s not the best use of the amnesiac hitman from Nikolas’ perspective. The primary reason Nikolas kept Jason’s identity secret was because of his ELQ stock that includes voting rights.

With Jason in jail, the shares are still in Quartermaine hands which makes them a threat. But if Nikolas can blackmail Jason into doing his bidding, the shares will be effectively under Nikolas’ control. So what’s the blackmail going to be?

It’s easy enough – Nikolas can either tell the police the events are fuzzy and he wants to wait for his memory to come back OR he can tell the police Jason assaulted him, threatened to kill him, and threw him off the balcony, but he hasn’t decided yet if he wants to press charges.

Either route, the end result is the same – Jason can either go to jail or give in to the blackmail. Jason hates Nikolas and will hate being under his thumb – but he would hate more to have his children grow up not having him around. That only leaves Jason one choice.

GH spoilers indicate that Nikolas’ control over Jason will rival Helena Cassadine’s [Constance Towers] level of control over Jake Doe when he had the microchip in his brain. But this time, it’s Jason allowing the control instead of it being forced on him.

With Hayden Barnes [Rebecca Budig] as the only witness, it looks like Jason is about to become the minion of the dark Cassadine prince – at least for now. If there’s a way out of this mess, trust Jason’s friends to find a solution, but that will take time.

Liz Webber [Rebecca Herbst] will try to get Nikolas and Hayden to back off of the assault and attempted murder accusations, but Nikolas will not. He’s had enough of Jason. Nikolas is firm in his conviction that everyone would be better off if Jason had never come back.

Because of that mindset, Nikolas feels no qualms about treating Jason in a way that is less than humane. That will work for Nikolas until Jason gets evidence to exonerate him – or dirt on Nik to counter the blackmail. Then Nikolas had better watch out – because Jason will come for him!

What do you think GH fans, what dirty deeds will Nikolas assign Jason once he has him under his control? Will he make him go against the Quartermaines? Carry out evil Cassadine deeds? How bad could this get?

Share your thoughts below – be sure to check back with Soap Opera Spy daily for plenty of ‘General Hospital’ spoilers, news and more.