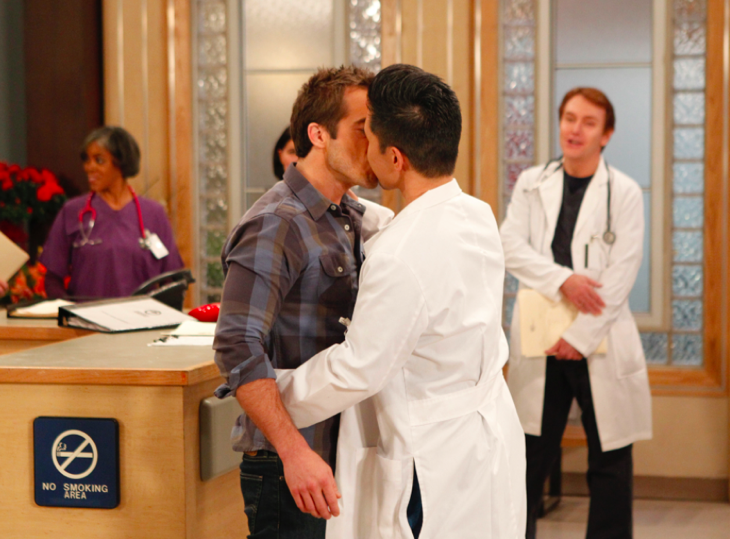 The big secret that Brad Cooper [Parry Shen] and Rosalie Martinez [Linda Elena Tovar] have been keeping is out, or at least part of it. What’s clear is that Brad and Lucas Jones [Ryan Carnes] can’t get married anytime soon, but Lucas has decided to work it out with Brad. This will get more interesting because we’ll be seeing more of Rosalie in a strange dynamic. Even though it’s Rosalie married to Brad, she will be the third wheel in the men’s relationship and this is something the writers can play with a lot.

Rosalie already hit on Lucas, so that’s funny, and since she’s currently unattached, we can expect to see her engaging in some interesting antics and may want her husband and his BF to use their gaydar and man-sense to help her find a BF of her own. Plus, Rosalie will fill the void in Brad’s life left by Britt Westbourne [Kelly Thiebaud]. This was a great pairing and we can already see that Brad and Rosalie have a rapport and a long-standing relationship so it’s a natural way to move forward.

What will also heighten the interest in Brad and Rosalie is that the new mob faction in Port Charles may be tied to Brad, Rosalie or both. Mrs Wu, the Asian mob leader, is very likely Brad’s biological mother and she could be the new mob madam in town. Alternately, the Riveras may be the ones moving into PC and we still don’t know who Rosalie’s family is. Persistent rumors indicate that Rosalie may be a Rivera and could even be the long-lost child of Sonny and the not-so-dead Lily Rivera.

The new mob in town may even be a marriage of the Wus and Riveras who paired up to take over the lucrative territory of both the Jeromes and the Corinthos syndicates. The mob trouble will be another complication that Lucas and Brad will have to face, along with the new wife in their relationship. What would be really great is if Lucas and Brad get a bigger apartment so Rosalie can live with them. The problem is that everyone in Port Charles knows they’re gay, so how will Brad explain Rosalie?

Surely Brad won’t want everyone in town to know he’s married to Rosalie and she won’t like that either. If word gets out that Rosalie is married, it will cut into her love life too. This is the most complicated love/just-friends triangle that we’ve ever seen on General Hospital. I can’t wait to see how this plays out and I hope Passanante and Altman really cut loose – this is an opportunity for awkward social situations, lots of humor – and even a chance for Rosalie to bond with Lucas. You never know what can happen.

Sign up for the Soap Opera Spy newsletter so you don’t miss a moment of General Hospital action along with spoilers, news and more.

‘The Young and the Restless’ Spoilers: Watch The YR Video Preview For Friday September 18, 2015 – SEE IT HERE!