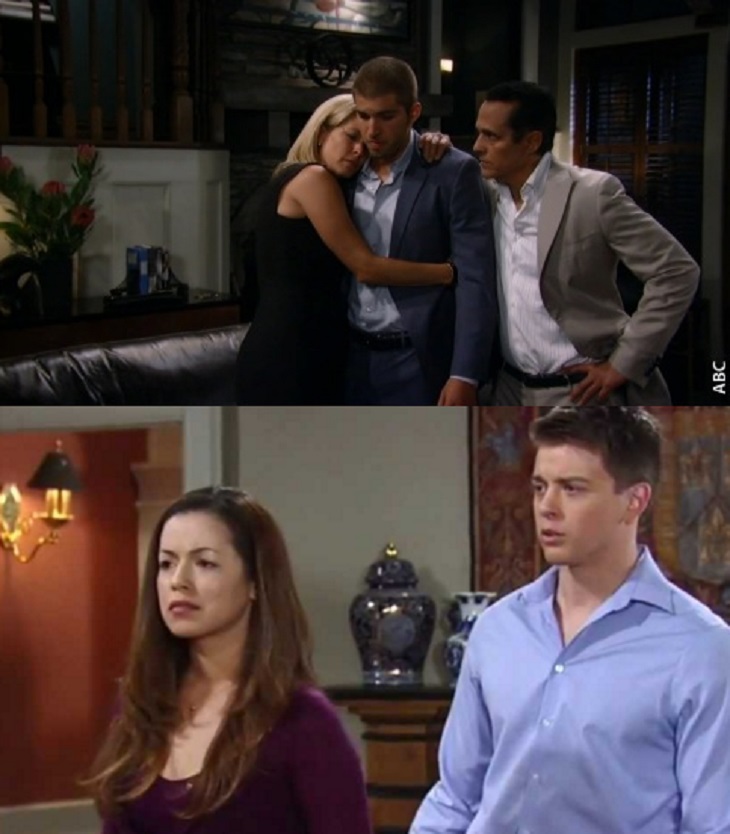 ‘General Hospital’ spoilers reveal that both Morgan Corinthos [Bryan Craig] and Michael Quartermaine [Chad Duell] have a rough road ahead each dealing with their own issues. This week, Morgan will talk Kiki Jerome [Hayley Erin] into leaving town with him after the reveal is made that she drove Carly Corinthos [Laura Wright] off the road. It looks like Carly will know it was not Franco [Roger Howarth] and understands that Kiki is important to Morgan, but Kiki doesn’t know just how important.

Kiki thinks Morgan is with her to protect her – but it’s really about his mental state unhinging! Morgan seemed okay for a while – as if the near death of his father Sonny Corinthos [Maurice Benard] brought him back to center. But now that Sonny’ recuperating. Morgan is spiraling out again. Kiki has no idea about Morgan’s mental problems until they run off to a cabin together to hide out from reality. Kiki begins to realize that Morgan is over the top obsessed with her and crumbling inside.

Related: Michelle Stafford Teases HUGE Announcement – What Could It Be?

Bryan Craig told ABC Soaps in Depth of his on-screen alter-ego Morgan, “Morgan’s not in his right mind. He obsesses over Kiki. He’s dangerously in love with her.” And this is hot off Morgan also trying to get too close for comfort with Ava Jerome [Maura West] yet again. GH co-writer Jean Passanante says of Kiki, “She starts to sense pretty quickly that things are a little over the top” and that “Morgan starts pushing her to give more than she’s ready to give.”

All this boils over back at home in Port Charles as well when Carly realizes she’s got to go get her youngest son and stage an intervention of sorts. The problem is, Sonny is in a wheelchair and can’t take part in the caper which frustrates him but he knows Carly can deal with Morgan since she’s dealt with his issues before. But will Carly get to Morgan before Kiki is in danger? And will Carly have to make the heartbreaking decision to put Morgan in a time out at Shadybrook since he won’t go to therapy?

Meanwhile, Michael’s life is not all wine and roses either. He was excited to go to the sonogram of his baby with Sabrina Santiago [Teresa Castillo] but she canceled because she knows the date of conception will pre-date her sex life with Michael. Sabrina will have to come clean to Michael about Carlos Rivera [Jeffrey Vincent Parise] likely being the daddy of her baby. Sabrina will decide that Michael loves her enough to handle it, but did she overestimate the Quartermaine heir’s affection?

Co-writer Shelly Altman told ABC Soaps in Depth, “One of her [Sabrina’s] big concerns is that the man supposedly responsible for putting Michael’s father in a wheelchair is the father of her baby!” While Michael may be stunned when Sabrina breaks the news to him, it’s likely Sonny could provide him valuable counsel on this subject. After all, Sonny hated AJ Quartermaine [Sean Kanan] yet raised Michael as his own because he loved Carly so much.

These two storylines demonstrate parallels between Sonny and Michael on the baby issue and Sonny and Morgan on the bipolar issue and co-writers Passanante and Altman are really bringing the drama. These will be gut-wrenching stories to watch and we can’t wait to see them unfold. Be sure to stay tuned to Soap Opera Spy for more spoilers on the Corinthos clan calamities and other goings on in Port Charles.