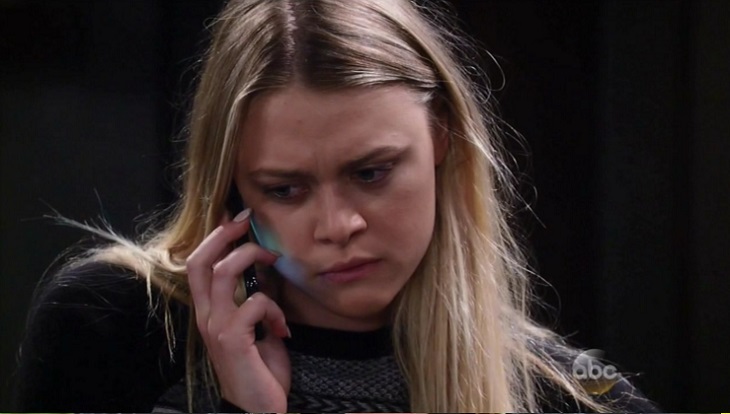 ‘General Hospital’ spoilers reveal that Detective Nathan West [Ryan Paevey] will soon begin an investigation that hits close to home and we think it’s going to involve his half-sister Nina Clay [Michelle Stafford] and her makeshift family including Franco [Roger Howarth] and Kiki Jerome [Hayley Erin]. The writers have been keeping the mentions alive of the car accident for days now which indicates importance.

We saw Morgan Corinthos [Bryan Craig] and Kiki come to the realization that his mom Carly Corinthos [Laura Wright] was the victim of the hit and run. You’ll recall that Carly explained her injuries when she showed up to the courthouse and revealed where her car crash occurred. Kiki and Morgan chatted about it but Morgan didn’t want Kiki to speak up since his mom survived the wreck. He sees it as a ‘no harm, no foul’ situation. But that’s not the end of it.

Then you may recall that Franco was on the phone ranting to his insurance company about repairing his car and wanting it done ASAP. Franco thinks that someone sideswiped his car in the parking garage, but we all know it was Kiki. These events could make Franco look like he ran Carly off the road then rushed the repairs to try and cover up the deed. After all, everyone in Port Charles knows that Franco has no love lost for Carly, so it would be easy to point a finger at him.

Once Franco hears that his car was involved in a hit and run accident, though, he’s smart enough to do the math and realize that Kiki was the likely culprit. Plus, Kiki told Franco she was going to use her car app to get a ride to and from the party (but then she stole his keys). But that’s easily verifiable. If Franco checks Kiki’s phone and her app history, he’ll know straight away that she lied and she’s the problem. When Nathan comes calling to check on the hit and run crime, will Franco already know it was Kiki?

And would Franco allow himself to be arrested to save Kiki? Or would he flip on her to try and scare her straight? Seems like Franco would be more likely to protect her than himself so he would probably go down for the crime rather than see Kiki suffer any more tragedy since it’s been a rough year for her. She lost her dad Silas Clay [Michael Easton] and is estranged from her mom, so Franco feels like he’s all that Kiki has and he won’t let her down.

This leads to the question of whether Kiki would let Franco take the fall for her. Morgan certainly wouldn’t encourage her to do so – he hates Franco with a passion. Kiki would likely let Franco be carted off in cuffs – at least initially – but then might think better of it and turn herself in. But don’t count Nina out. Just as Franco made every effort to defend Nina, she would do the same for Franco – if he lets her. Franco might be able to talk Nina into letting him cover for Kiki. Maybe.

‘General Hospital’ spoilers indicate that next Friday, November 20th, Nathan will start his investigation and there are rumors of an arrest to follow in the days to come. The real question is, will it be Franco or Kiki hauled off in handcuffs? Stay tuned to Soap Opera Spy for more on this plus other GH spoilers, casting news and gossip.