‘General Hospital’ Poll: Brenda Barrett and Carly Corinthos Battle it Out For Sonny – Who Should Our Favorite Mobster Choose? 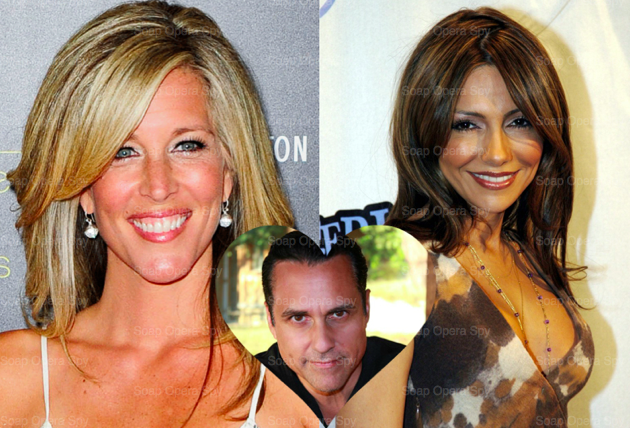 ‘General Hospital’ spoilers indicate there may be a Brenda Barrett [Vanessa Marcil] and Sonny Corinthos [Maurice Benard] reunion in the works. Marcil recently hinted that she may be headed back to Port Charles and, if she does, there is bound to be drama between Brenda and Carly Corinthos [Laura Wright], especially if Brenda decides she wants Sonny back. How epic would it be to see an all-out Brenda vs Carly brawl for Sonny’s love?

Let’s take a quick look at how these ladies stack up:

Fertility: Sonny loves his kids and Carly birthed him one (Morgan) and let him adopt another of hers (Michael). Brenda, however, didn’t want to bring a kid into that mix. Advantage: Carly

Finances: Brenda doesn’t seem to be much of an income earner. Carly, on the other hand, has made gold from the straw of her past marriages and now co-owns the Metro Court Hotel. If Sonny wants to quit the mob and be a stay at home dad to baby Avery, Carly’s got the bucks to support him. Advantage: Carly

Shenanigans: Carly has done all sorts of evil over the years including unethical activities and some that are downright illegal. Brenda, however, tends to be more of a good girl. Advantage: Brenda

Marriages: Brenda’s only valid marriage was to Sonny. Her marriage to Jax was invalid and her sham marriage to Jason was annulled. By comparison, Carly married AJ, Sonny, Alcazar and Jax. Carly’s wedding dresses should be outfitted with revolving doors. Advantage: Brenda

Marriages to Sonny: Brenda married Sonny for about five minutes once after several near-misses. Carly, on the other hand, has wed Sonny three times. So we know those two are willing to make a commitment to each other, albeit a temporary one. Advantage: Carly

Feelings: Sonny and Carly seem to want each other most when someone else wants the other one. Jealousy seems to be their primary aphrodisiac. Most recently, Franco had Carly and Sonny just had to take that toy away. But Brenda seems to have a timeless hold on Sonny. When they split last time, he only let her go because he thought she shagged Michael. Even so, Sonny said “until next time.” Absence makes the heart grow fonder and Carly is always around. Advantage: Brenda

Influence: Finally, and perhaps most importantly, Carly is an enabler that supports Sonny’s criminal leanings even when it causes harm to her or her children. Brenda, on the other hand, wants better for Sonny and he, in turn, wants to be a better man for her. Long term, Brenda may be the healthier choice although you have to give props to Carly for always standing by her man. Advantage: Tie

By our scoring, Brenda has a slight edge but, then again, Carly is tenacious as all get out and won’t go down without one heck of a hair-pulling, clawing, scratching cat fight. So, what do you think, Soap Opera Spies? If ‘General Hospital’ show runners convince Vanessa Marcil to come back for another turn as Brenda, will she win Sonny away from Carly? Or will Carly be able to hang on to her man?

‘The Bold and the Beautiful’ Rumors: What Is Maya’s Big Secret? – The Good, The Bad and The Ridiculous – Vote In Our Poll!