General HospitalLove It Or Leave It

‘General Hospital’ Love It or Leave It: Which GH Storylines Are You Hating and Loving Right Now (POLLS) 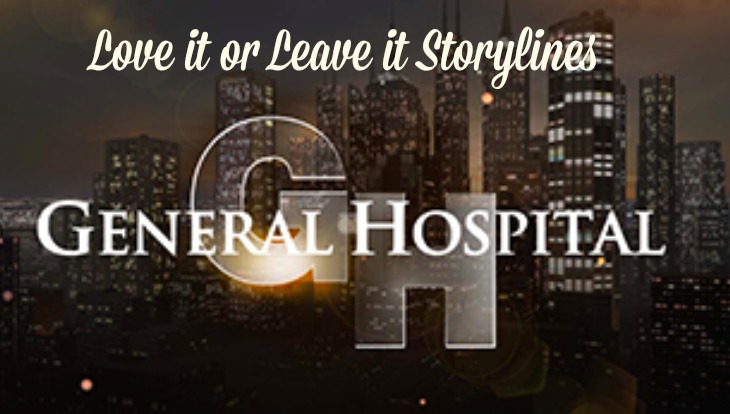 There are some great “General Hospital” storylines going on right now – some seem to be dragging on too long without fruition and others are just plain lackluster. As a GH fan, what do you think? Would you happily take up residence in Port Charles to watch the drama and hijinks as they ensure or would you find it to be Boresville, USA? Here’s a rundown of the major storylines and where they’re at right now…

We’ve all known for a while that Anthony Geary is retiring and that means the writers have to orchestrate a departure for Luke Spencer. But is this storyline dragging on too long? Or are you enjoying every moment of the last few moments of Luke’s screen time?

Let’s face it, Ava Jerome [Maura West] is fun and Denise is Ava 2.0 with a kick. But we know she can’t hide as Denise forever. Do you want to see Ava back with Silas Clay [Michael Easton] or – even better – back with Morgan Corinthos [Bryan Craig]? Do you want Denise or Ava to stick around?

While it is exciting to see Nikolas Cassadine [Tyler Christopher] finally embrace the family evil, does it seem that his takeover of ELQ isn’t quite as sinister of a lot as we’d like? But would you prefer to see Nikolas get back to being nice or keep working on becoming Port Charles’ next big villain?

Poor baby Avery – forced into early labor then immediately kidnapped, the kid has a great future as the next great victim of Port Charles. But is Sonny Corinthos [Maurice Benard] really her dad? Or could it be Morgan? Does she really belong with Michael Quartermaine [Chad Duell]? And what about Ava?

Now that Olivia Falconeri [Lisa LoCicero] has come up with this big plot to convince Julian Jerome [William deVry] that their baby is dead, will her secret stay buried? And once the truth inevitably comes out, will Julian win custody owing to Olivia’s betrayal?

Franco [Roger Howarth] and Nina Clay [Michelle Stafford] are not together right now, but they have a Greek tragedy vibe that intrigues. When will Nina finally realize hubby Ric Lansing [Rick Hearst] is the devil? Did Nina’s baby really live and who is it? Will Franco help her sort out her drama?

This is a big one that will touch most every character in Port Charles. There are a handful of people that know that Jake Doe [Billy Miller] is Jason and another dozen or so that should be able to tell since he’s the same height, eye color, build, mannerisms, etc. When will someone tell this poor man who he is?

These are just a few of the hot plots swirling in Port Charles right now and we want to know what you think. Which storylines on General Hospital are you enjoying right now? Which storylines do you feel are lame, too slow or totally unnecessary? And if you were in charge over at the GH writer’s room, what would you do differently?

Please share your thoughts in the comments below – you never know, it may have an impact. GH writers are known to troll the interwebs looking for fan feedback – that was the reason they changed Fluke from being Bill Eckert back from the dead and made him split personality Luke instead. Your opinion matters!